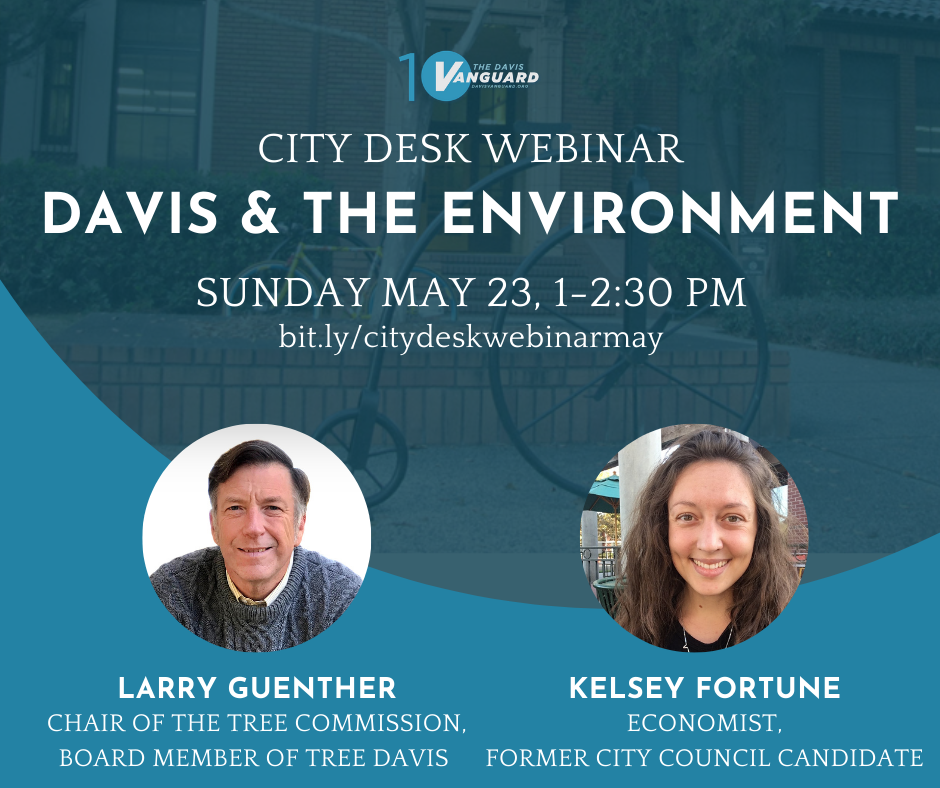 On May 23, the City Desk for the Vanguard at UC Davis hosted a webinar to engage in discussion related to climate change, socioeconomic disparities in tree cover and sustainability.

The first question asked the panelists whether they believed socioeconomic disparity existed in Davis in relation to who has tree and shade cover access.

Guenther answered that there are definitely areas that have more trees within the city compared to others. He stated how Tree Davis is currently working with the city on a Grant Community Canopy, which aims at planting 1000 trees in Davis while also visiting underserved neighborhoods.

The next question asked how green spaces and sustainable housing practices could be incorporated and what building codes favor green technology.

Fortune claimed that while tree cover is an important source of shade, buildings that are built taller and closer to the sidewalk are also important sources of shade. Fortune also added how narrow streets and closer multi-floored buildings would allow for the sun to not reach the ground, maintaining a cool atmosphere. Referencing building structures in Spain, Fortune called for the city to observe more of the urban planning in cities with similar circumstances as Davis, just to get a sense of what is required.

Guenther added how building densely needs to be complimented by having goods and services spread throughout the city, with neighborhoods each having their own close-by centers for goods and services. Guenther stated how having businesses in walkable distances would not only be healthier for the community but also would be convenient for people living next to these businesses due to close proximity and low disturbance.

The next question served as a follow up question, asking panelists how they would balance having buildings built close to each other with the consequent lack of privacy.

Fortune stated how Davis would continue to have single-family houses with private backyards for those who would prefer to keep their privacy. However, Fortune claimed that having the ability to try living in close proximity buildings would be an important cultural shift that offers the benefits of building a tight knight community.

Guenther further added that privacy is still possible for families living in close spaces when they construct boundaries. Guenther also added that living in private spaces has induced a strong sense of rugged individualism which plays a huge role in building our identities but does more harm to the concept of community and togetherness.

The panelists were then asked whether there are people or groups that get shut out of the environment conversation and how the City can make unheard voices heard.

Fortune answered by stating how the City doesn’t engage much with renters, despite consisting of 60 percent renters. Though the city seeks public engagement, Fortune also emphasized how having biased opinions doesn’t help the problem. Until the voices of renters are more heard, Fortune believes that there is a divide between Davis citizens and those who are living in Davis on rent.

The next question asked panelists what they believe to be the major problems in the city in regards to environmental racism and classism.

Fortune listed how the City needs to do a better job of engaging with property owners who are renting as there is a clear misinterpretation in high cost environmental solutions. Fortune added how the lack of engagement with lower income citizens of Davis would only create further problems when environmental solutions,which wouldn’t necessarily benefit lower income citizens, are implemented, leaving a group of the city to be disadvantaged.

Guenther stated that while environmental equity within the city may not increase broadly at once, where there is a will there’s a way. Whether it’s affordable housing or any other matters of equity, Guenther stated how there needs to be a sincere effort to create change, and whether or not these efforts are truly impactful becomes evident very clearly. Being inclusive in environmentalism means getting information from wide socioeconomic backgrounds so that change within the city is meant to reflect positive change for the city as a whole.

The webinar then proceeded to ask audience questions. The first audience question asked for comments regarding the City’s lack of enforcement of current tree land that requires 50 percent parking lot shade.

Guenther responded how ordinances hold no significance if they don’t have solid codes and lack of enforcements. Guenther stated that the Tree Commission is currently undergoing a process of reviewing the Tree Ordinances in relation to parking lot trees in efforts to make existing codes clearer. Guenther lastly added that parking lots are closely related to changes in methods of transportation, which essentially means getting more people out of their cars.

The next audience question focused on close-proximity housing and how people living in dense housing could still enjoy the beauty of the night sky.

To this question, both panelists suggested that going out of town would be a solid option for those living in dense areas if they so choose to. Close buildings combined with narrow roads and street lights bring less of the night sky, meaning that observation would require going to an area where there is more viewing space.

The last question from the audience asked panelists how the City can be fair while building better places.

To this question, Fortune claimed how the areas in which density has been increasing have all been towards the edge of town and away from the downtown and campus areas. Whether or not density in the edge of the city proves to be beneficial or not, Fortune emphasized the need for a culture shift which is needed to bring people out of their cars and in walking distances of goods and services.

Additionally, Guenther elaborated on the possibility of building multiple downtowns within the city, simply because one downtown can’t support the shopping needs for the whole city. By having multiple downtowns, Guenther envisioned multiple centers for goods and services within the city, each providing these services to finite localities based on the needs of the respective dense areas.