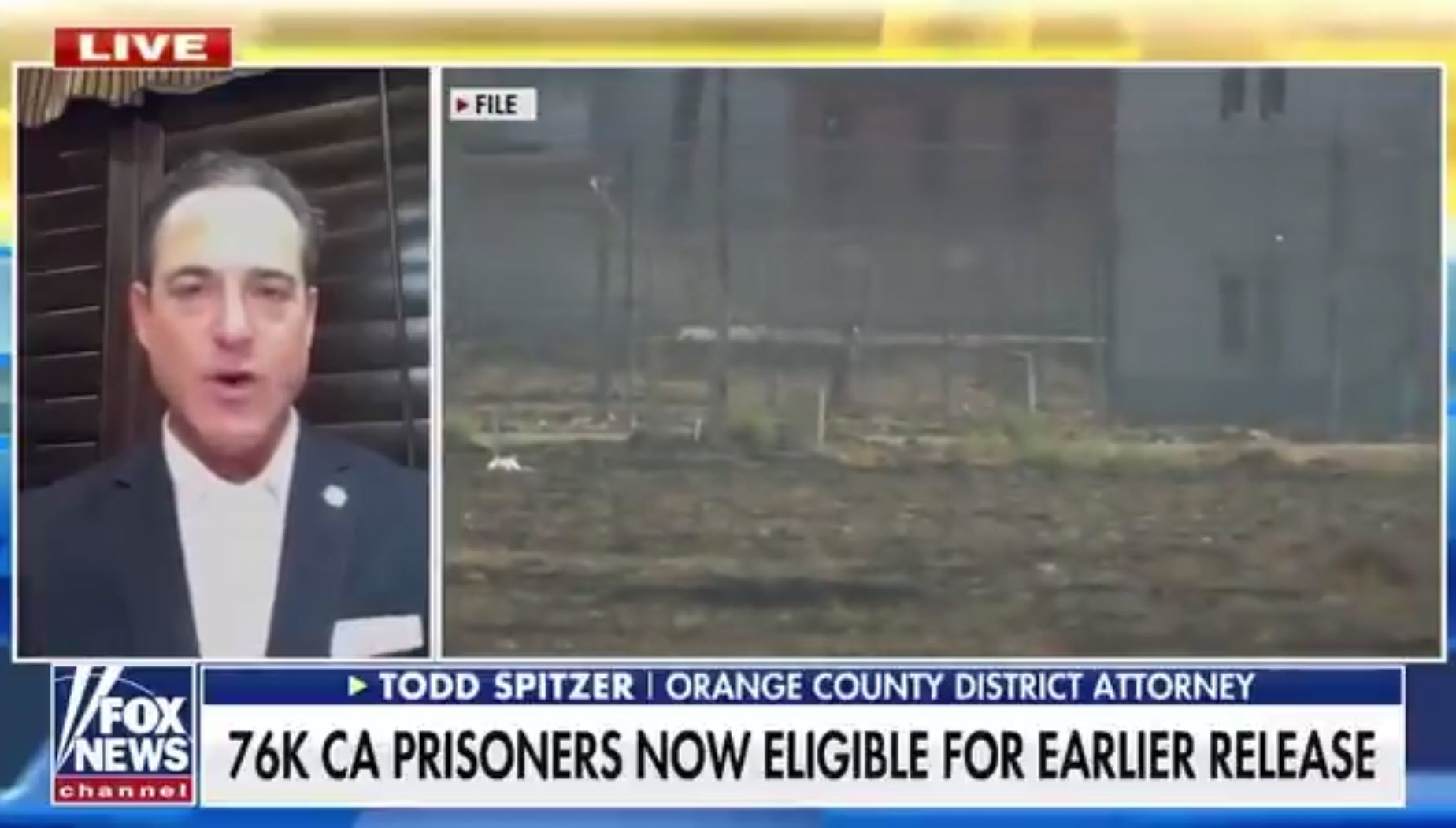 In a tweet on last week, Todd Spitzer, who ironically was elected in 2018 as a reformer tasked with cleaning up the DA’s office racked by scandal under Tony Rackaukas, continued his move to the hard right by posting a clip from an interview this time on Fox News.

He said that “Newsom is very proud that he’s going to close two prisons in California,” and called California “one of the most dangerous states in the nation and the agenda is to end mass incarceration.”

Spitzer was responding to news that California is giving around 76,000 incarcerated people including those convicted of violent and repeat offenses an opportunity to leave prison early.

Basically those people will become “eligible for good behavior credits that shorten their sentences by one-third instead of the one-fifth that had been in place since 2017. That includes nearly 20,000 inmates who are serving life sentences with the possibility of parole.”

However, the new rules will take “months” or even “years” before anyone is allowed to go free earlier with officials stating “the goal is to reward inmates who better themselves while critics said the move will endanger the public.”

Spitzer pushed back on this modest move.

“We’re talking about the most violent of the violent – second strikers, those who have committed two or more serious violent felonies and three strikers,” he

said.  “Let me be clear this is not about good credit this is about not being bad.  You get these credits just if you breathe air.”

He said, “Obviously there is an agenda in California that is anti-victim.”  He said, “They want to release everyone out of jail, they could care less about public safety, homicides are out of control.”

He singled out Larry Krasner, Chesa Boudin and George Gascon stating, “homicides are out of control.”

I continue to be surprised at how hard he is pushing back against a fairly unknown challenger in Pete Hardin.  Hardin is running as a reformer.  He has an interesting background both as a reform prosecutor and a Judge Advocate with the marines.

He is running on a reform agenda – against the death penalty, in favor of bail reform, and concerned about the string of missteps by Spitzer who ironically was elected to clean up the mess created by then incumbent DA Tony Rackaukas.

He won with a good deal of support from progressives and reformers and has now turned on them, attempting to link Hardin with LA District Attorney George Gascon.

On Thursday, Spitzer tweeted a story from the LAist, “Why DA Gascón Reversed Decades of Parole Policy To Support Release In Most Cases.”

The LAist reports, “In a reversal from previous DA’s, Gascón has ordered his prosecutors to support parole in most cases. Historically, prosecutors have generally opposed parole. Gascón has also prohibited deputy DA’s from attending Board of Parole hearings.”

“It’s almost making the assumption that the individual that has been in prison for decades is still the same person that he or she was when they were convicted,” Gascón said. “People evolve.”

Spitzer has a different view apparently and used the moment to attack Hardin.

He tweeted, “Gascon recruited Cheating Pete to run here in OC. LET ME BE CLEAR “NO LA IN THE OC!””

It’s not clear how credible the attack actually is because it quotes, a site called, “MilitaryCorruption.com” which one commenter argued is a “random conspiracy theory website.”

Remember this is an incumbent over a year out from the primary election.

Last week was the second time in the last month Spitzer went on right wing media to make his case.  In April, Spitzer appeared on Newsmax.

The commentator Stinchfield lays out the red meat: “I’m concerned it’s not just you, that they’re moving into the suburbs with this Soros-style DA system that’s just weak on crime.” Monday Morning Thoughts: Orange DA Takes His Show to Newsmax

Taking the bait, Spitzer says, “Look what George Gascon did in San Francisco.  We have 38,000 people leaving San Francisco after he was the district attorney… Crime is out of control in Los Angeles.”

He then attacked his opponent, Hardin, “They recruited someone to Orange County who hasn’t been in Orange County very long.  He’s a criminal attorney.  His campaign office in downtown Los Angeles.  His campaign manager and consultant are in Los Angeles – and he has already announced exactly the same lines as George Gascon.  No bail.  No death penalty.  No enhancements.”

“He said, you take Boulder, Colorado, you don’t think when you’re a mass murderer you should be considered for the death penalty?” he said seeming to forget that Colorado ended the death penalty and California has effectively ended it as well.  “What about Atlanta, Georgia?”

Hardin in a statement to the Vanguard added, “Appearances on a network renowned for being truth-adverse is disqualifying, as the District Attorney must seek the truth at all costs. There’s no justice in the absence of truth, and this DA’s desire to be in the spotlight is an impediment to the fair administration of justice in Orange County.”

Meanwhile clearly Spitzer clearly sees the move hard right as his path to reelection despite winning the first time with the help of progressives.

Why given Orange County’s move toward at the very least purple status is anyone’s guess.