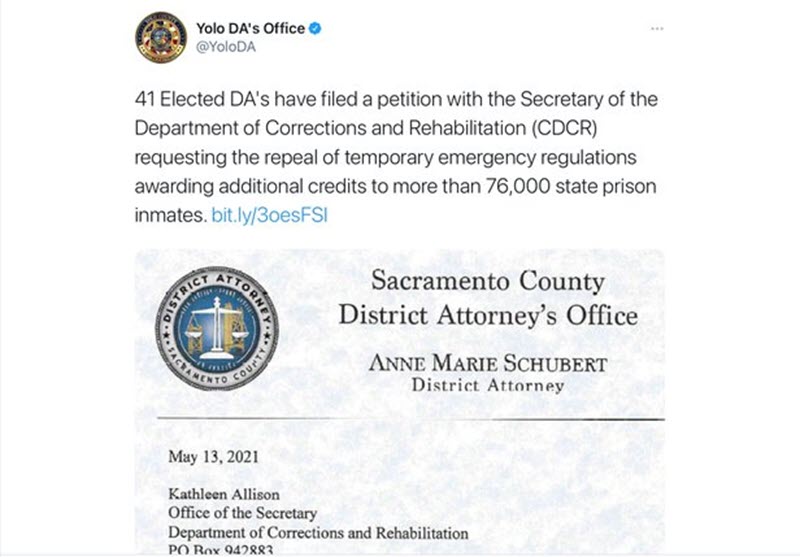 Sacramento, CA – Sacramento DA Anne Marie Schubert announced on Thursday that she and 40 other DAs in California have filed a petition with CDCR attempting to repeal temporary emergency regulations awarding additional credits to more than 76,000 state prison inmates.  Among the signees is Yolo County DA Jeff Reisig.

Last week Governor Newsom announced that changes to Prop. 57, passed by the voters in 2016, will allow 76,000 incarcerated individuals a mechanism to be released early from state prison. Those individuals include over 63,000 people incarcerated for violent crimes who will be eligible for Good Conduct Credits that shorten their sentences by one-third, instead of the previous one-fifth.

As Newsom explained last week, “The goal is to increase incentives for the incarcerated population to practice good behavior and follow the rules while serving their time, and participate in

rehabilitative and educational programs, which will lead to safer prisons… Additionally, these changes would help to reduce the prison population by allowing incarcerated persons to earn their way home sooner.”

However, Anne Marie Schubert, the Sacramento DA who is running against AG Rob Bonta in 2022, has opposed the change.

“This is wrong and dangerous for California. The Appointed Attorney General should oppose these rules that will result in thousands of dangerous inmates being released. The job of the Attorney General is to enforce the law to keep the public safe. To sit back and do nothing speaks volumes about his values towards public safety, crime victims and his ability to lead the office of the state’s top law enforcement officer,” Schubert said in a statement. 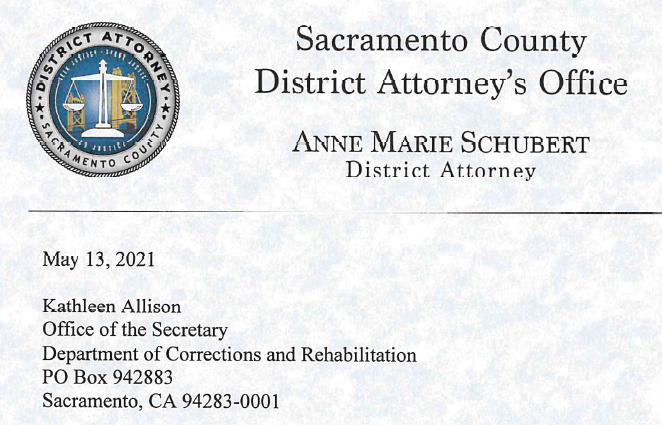 According to a release, the new regulations “were passed under a claim of an emergency and first made public on Friday April 30, 2021, at 3:00 p.m. These regulations would result in the early release of some of California’s most violent criminals.”

In adopting these regulations, and claiming an emergency, the CDCR Secretary stated these regulations were necessary to comply with “the direction outlined in the Governor’s Budget Summary” presented a year ago on May 14, 2020.

However, Schubert and the other DAs claim, “By invoking an emergency, the traditional regulatory scheme and transparent public comment period was bypassed.”

The administrative law petition is often the first step in seeking a formal court order declaring the regulations unlawful. If the emergency regulations are nullified by a court, CDCR would be forced to pass the regulations in the traditional manner, requiring the State’s Office of Administrative Law to provide greater transparency and public input.

Schubert explained, “This petition asks CDCR to repeal these regulations, begin the process anew, and allow for transparency and public input. Victims, their families, and all Californians deserve a fair and honest debate about the wisdom of such drastic regulations.”

DA Reisig issued a statement on Thursday as well, adding, “It’s one issue for CDCR to unilaterally shorten sentences which can create a danger to the public and adversely impact crime victims. But to do so without transparency, public input and without a valid and legal rationale, violates core democratic principles and due process. CDCR needs to repeal these regulations and start the process anew in a fair, just and legal manner.”

Among the notable DAs signing the letter: Vern Pierson of El Dorado County, who is the President of CDAA, Todd Spitzer of Orange County, Michael Hestrin of Riverside, Dan Dow of San Luis Obispo, Krishna Abrams of Solano, Summer Stephan of San Diego, and Joyce Dudley of Santa Barbara County.