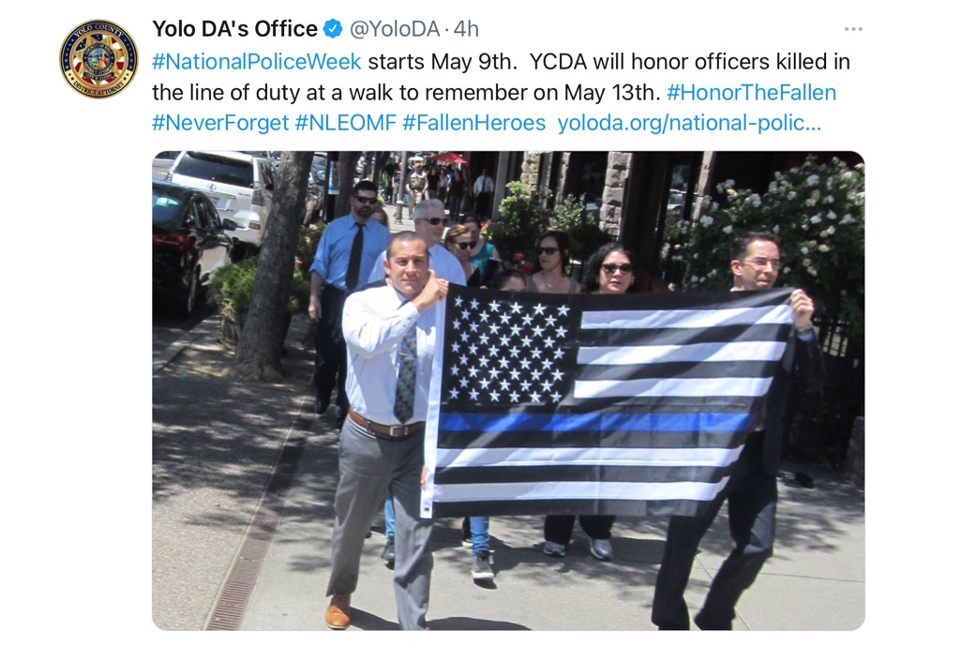 Woodland, CA – The Yolo County DA’s Office on Friday afternoon tweeted out what was supposed to be an ode to officers killed in the line of duty who will be honored this week.  But the photo shows the Thin Blue Line or Blue Lives Matter Flag, with Deputy DA Matt De Moura and former Deputy DA Kyle Hasapes carrying the flag down Main Street in Woodland.  Behind them, decked in sunglasses, DA Jeff Reisig.

Clearly the photo is a few years old—pre-COVID—and Hasapes has since left the department for the Placer County DA’s office.  But that was the choice of photos used for a tweet.

The choice of the Blues Lives Matter flag is odd.  The flag, traditionally a symbol of solidarity with the fallen, has become controversial as it increasingly has been seen as a pushback against the Black Lives Matter movement.

Reisig has been attempting to re-frame his image as that of a moderate reformer in between Anne Marie Schubert, the Sacramento DA, and Chesa Boudin, the more reform-minded San Francisco DA.

They gained a boost last month when the Sacramento Bee published the editorial: “Yolo County DA wants to address racial bias. Why the Sacramento region should, too.”

Wrote the Bee, “Racial bias pervades the criminal justice system, but there’s some promising news coming out of Yolo County. District Attorney Jeff Reisig is pioneering reforms to increase transparency and shed light on potential disparities. Every DA in California — including Sacramento’s — should take notes.”

They write: “During the Black Lives Matter protests last summer, public defenders in Yolo County spoke out about racial disparities in criminal sentencing and joined protesters in a demonstration outside the courthouse. Reisig denied the claims. But it’s clear that he wants to be more proactive and address these realities head-on.”

But just as Reisig disparaged Public Defender Tracie Olson for speaking out last year, Reisig now undermines his own message by tweeting out the Thin Blue Line flag, dripped in racist and other controversy.

“The controversial version of the U.S. flag has been hailed as a sign of police solidarity and criticized as a symbol of white supremacy,” the Marshall Project reported last June in the wake of the Black Lives Matter protests and Blue Lives Matter counter protests.

They note: “Those who fly the flag have said it stands for solidarity and professional pride within a dangerous, difficult profession and a solemn tribute to fallen police officers. But it has also been flown by white supremacists, appearing next to Confederate flags at the 2017 ‘Unite the Right’ rally in Charlottesville, Virginia.”

Consider as well, many areas have actually banned the image because it is incendiary.

San Francisco Police Chief Bill Scott “banned his officers from wearing face masks emblazoned with the thin blue line flag, worrying they would be seen as “divisive and disrespectful.” The masks had been distributed by the local police union, which accused the department of failing to provide masks.”

Then there was the Capitol siege in January

The Washington Post noted in an article in January, “In a crowd where some carried flags bearing a thin blue line — a pro-police symbol that critics claim also stands for white supremacy and opposition to the Black Lives Matter movement — and shirts adorned with ‘Blue Lives Matter,’ a tide of anger and frustration rose as officers pushed them back.”

The Post adds, “Conservatives and members of the far-right long have sought to position themselves on the same side of the societal and cultural divide as police. Republicans backed President Trump’s campaign message of ‘law and order,’ and amid rising calls to ‘defund the police’ during racial justice protests last year, the GOP was swift to criticize efforts to shrink police budgets. Police unions and officers vocally supported Trump’s bid for a second term.

“But on Wednesday, as the Capitol was being breached and ransacked, people who see themselves as friends of the police were confronted with the reality that law enforcement would not always respond in kind.”

Jeff Reisig and his supporters would no doubt respond, as many allies have elsewhere, that the use of the flag was in solidarity with fallen police officers.  Its use was definitely not meant as a showing of solidarity with white supremacy.

But that’s exactly the problem.  The flag has been co-opted by the far right, white supremacists, and those pushing back on the Black Lives Matter movement.  Given the times, isn’t it at best tone deaf to display the Thin Blue Line Flag so prominently in a tweet like this where the DA himself appears?

In my view at this point, the symbol is at the very least racially charged—if not outright racist.  The DA should have known better.  And sadly, the local media will not call him on this.

26 thoughts on “Sunday Commentary: Reisig’s Office Displays Thin Blue Line Flag Despite the Controversy That Swirls Around It”