By Anika Khubchandani and Beth Miller

Avey first called Sheriff’s Deputy Jacob Morgan, who was dispatched to a shooting July 30 of last year near Elkhorn Boulevard in Sacramento.

Deputy Morgan recalled seeing a red Nissan Sentra belonging to suspect Benton, and a red Jeep Cherokee with a bullet hole on the lower left side of the trunk belonging to one of the victims.

Morgan said he learned from one of the victims that the defendant “cocked a black and silver Glock style handgun,” and said “she would shoot the vehicle and the tires.”

The two victims tried to drive away but then the suspect shot at their vehicle. Deputies “searched the Jeep and found a fragment of the bullet inside the vehicle,” said Morgan.

Deputy Brian Russell said the two victims, Belton, and Belton’s friend went together to Thunder Valley Casino on the evening of the shooting in one car. One of the victims had $2,000 to gamble with at the casino, but then quickly realized that the money was nowhere to be found.

She accused Belton’s friend of taking the money, sparking an argument between Belton and one of the victims.

The defendant, allegedly upset by the accusation, yelled at the victims, “I’m so mad right now…I’m not going to jail.” Eventually, the victim that made the accusation found the money stuffed between the center console and driver’s seat of Belton’s vehicle.

After finding the money, Belton tried to kick the victims out of her car at the casino but they all ended up driving back together to an apartment complex. Upon arrival at the apartment complex, the victims got out of Belton’s vehicle and went into the red Jeep Cherokee owned by one of the victims.

The two victims tried to leave but “the defendant blocked them in with her car,” according to Russell. When the victims were finally able to leave, “Belton shot at the back of their car,” allegedly.

Deputy Ken Lloyd testified to the statement he took from another victim at the apartment complex who was also threatened by Belton with the gun.

According to Lloyd’s account, Belton was parked in front of the exit gate of an apartment complex when the third victim attempted to enter through. Since the victim did not possess a clicker to the complex, she said “it is common knowledge to go through the exit gate” to gain access.

The victim got out of her car to talk to Belton and asked her to move her car so that she could enter; however, an altercation quickly arose.

Belton allegedly threatened to kill the third victim and said “the only reason she hadn’t shot them was out of respect for their kids,” according to witnesses. At that point, the third victim, her friend, and the friend’s mother backed away from Belton brandishing the gun.

Eventually, Belton put the car in reverse and allegedly tried to hit the three victims before driving away through the exit gate while yelling that she would be “getting some friends and coming back,” recounted Lloyd, who testified based on witness statements he obtained.

Judge Stacy Boulware Eurie said she believed the “offenses alleged to be committed and true” and found “there to be sufficient cause to believe that Ms. Belton is guilty.”

Belton is scheduled to be arraigned on June 23 prior to trial setting. 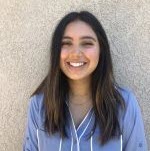 Beth Miller is a junior at UC Davis studying Public Service and Gender Studies. She is from Ventura, California, and aspires to promote justice and equality in a continuously evolving society.