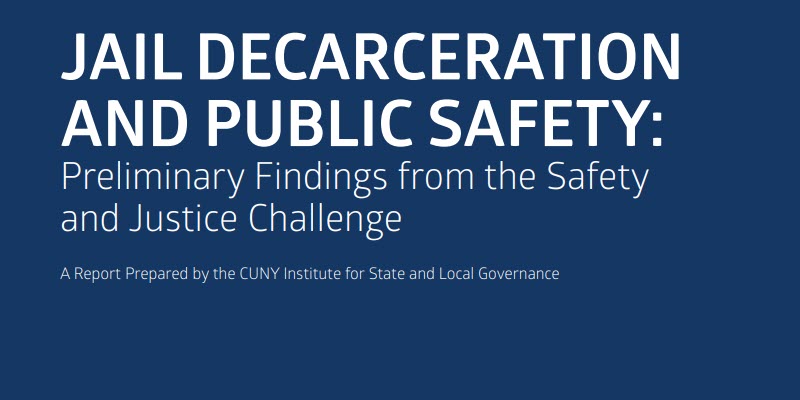 The SJC is a prominent advocate for finding alternatives to excessive incarceration. Data they produced in conjunction with the Institute for State and Local Governance (ISLG) at the City University of New York in their recently released report substantiate these alternatives.

The Challenge is sponsored by the John D. and Catherine T. MacArthur Foundation, with the purpose to “identify the drivers of over-incarceration…address racial disparities in incarceration, and improve the system as a whole; and build infrastructure to track the right data and measure performance over time.”

The goal to not only “reduce jail populations, but to do so safely,” is stated in the introduction. The report explores the SJC’s decarceration strategies, specifically the safety precautions associated with its implementation.

The key findings summarized at the beginning of the report state that after the implementation of SJC’s initiatives, both incarceration and crime rates decreased substantially.

“Across SJC sites, the crime rate declined by seven percent between 2017 and 2019, which was close to the 10 percent decline at the national level.”

Another key finding in their research is that the rate of inmates returning for violent crimes either stayed the same or decreased amongst the cities the study was conducted.

“However, the violent crime rate fell more steeply across SJC sites than nationally after 2016. Between 2017 and 2019, violent crime in SJC sites decreased at a faster pace (-6%) than the national trend (-4%).”

Just as crime trends before and after the implementation of the SJC were examined, so too were return-to-custody rates.

Different types of return charges were also differentiated and studied. This process was accomplished “by comparing return-to-custody rates—before and after the launch of SJC—for three cohorts of people released from jail pretrial, with a focus on the returns to custody that occurred during the first 12 months after release.”

With the goal of the SJC being to reduce jail populations and do so safely, SJC noted return-to-custody does not always indicate whether the public is safe. T

In fact, returns to custody are also influenced by the institutional powers that are in control of policing and incarceration, according to the study.

For example, “returns to custody may even be related to systemic factors, such as a lack of housing.” Furthermore, it is important to acknowledge “any potential changes in law enforcement’s arrest practices that may have occurred over the course of the study period, which would affect return-to-custody rates.”

It is important to note, suggests SJC, that return to custody rates are not solely new violations of the law.

They can also be “due to other reasons associated with previous cases (such as a failure to appear in court, to serve a sentence, for a violation, etc.).”

For example, return to custody cases can occur because the defendant first broke the law by driving over the speed limit and then must return because they committed a different crime, such as theft.

The data relating to individuals released from jail before their trial explained that most of those people “were not returned to custody within a year, and returns to custody due to violent crime charges were rare.”

It was determined that “prior to the implementation of SJC jail population reduction strategies, 38 percent of those released on a pretrial status were returned to custody within 12 months,” and that percentage remained true in the following years with the SJC.

Similarly, it was stated that “any return to custody in the follow-up period was counted; for example, if a released individual was returned to custody twice in the 12-month follow-up period, once for a misdemeanor and once for a felony, that individual was counted as returning overall and counted as returning in both the misdemeanor and felony categories.”

The SJC was clearly thorough in accounting for all the data involved in this mission.

Just as stated above, while the SJC aims to provide the public with information on jail decarceration and change the local criminal justice system, “among individuals initially booked on a misdemeanor or felony who were released pretrial, return-to-custody rates remained at or near pre-SJC implementation levels.”

Based on the goal of the SJC, the past six or so years may have not made as much progress as desired in lowering recidivism and jail populations.

However, it is known that populations, including those of prisons, usually increase over time.

Therefore, the SJC has begun the process of reducing the amount of incarcerated individuals through the fact that “there was no change in the percentage of people released pretrial on a felony charge who were returned to custody within a one-year time frame.”

One of the most important things to take away from this is that “the findings of this analysis suggest decarceration efforts in SJC sites did not endanger public safety, as defined by changes in crime rates and individuals being returned to custody.

Overall, the study shows how the SJC has addressed their goals of reducing the incarceration rate while keeping public safety as a top concern. Using data from 2015 to present, they examined crime and incarceration rates, paying special attention to analysis of those who had returned to custody.

It was found that the SJC was able to successfully reduce incarceration rates, and that their work did not correlate to any increases in risks to public safety.

Annette Wong-Toi is a third-year student at UC Davis studying Psychology and Communication. If she isn’t learning a new instrument or taking a nap, she’s probably feeding the stray cats outside her apartment. She hopes to develop her listening and communication skills to be a better student, writer, and friend.

Natalia Claburn is a first year student at UC Davis majoring in English and minoring in Political Science. She is from San Francisco, California and plans to someday work in the justice system.

Priana Aquino is an incoming 4th year at the University of San Francisco, majoring in Business and minoring in Legal Studies. Upon graduation, she hopes to attend law school and continue her work in uplifting and advocating for communities of color.

Tatiana Gasca is a fourth year student at UC Berkeley, double majoring in Legal and Ethnic Studies. She is from Santa Ana, CA.

Share:
Tags:DecarcerationJail Decarceration and Public SafetyPublic Safety
Previous : The World Will Spin Again
Next : Guest Commentary: Without Social, Economic, and Political Equality, There Is No Freedom