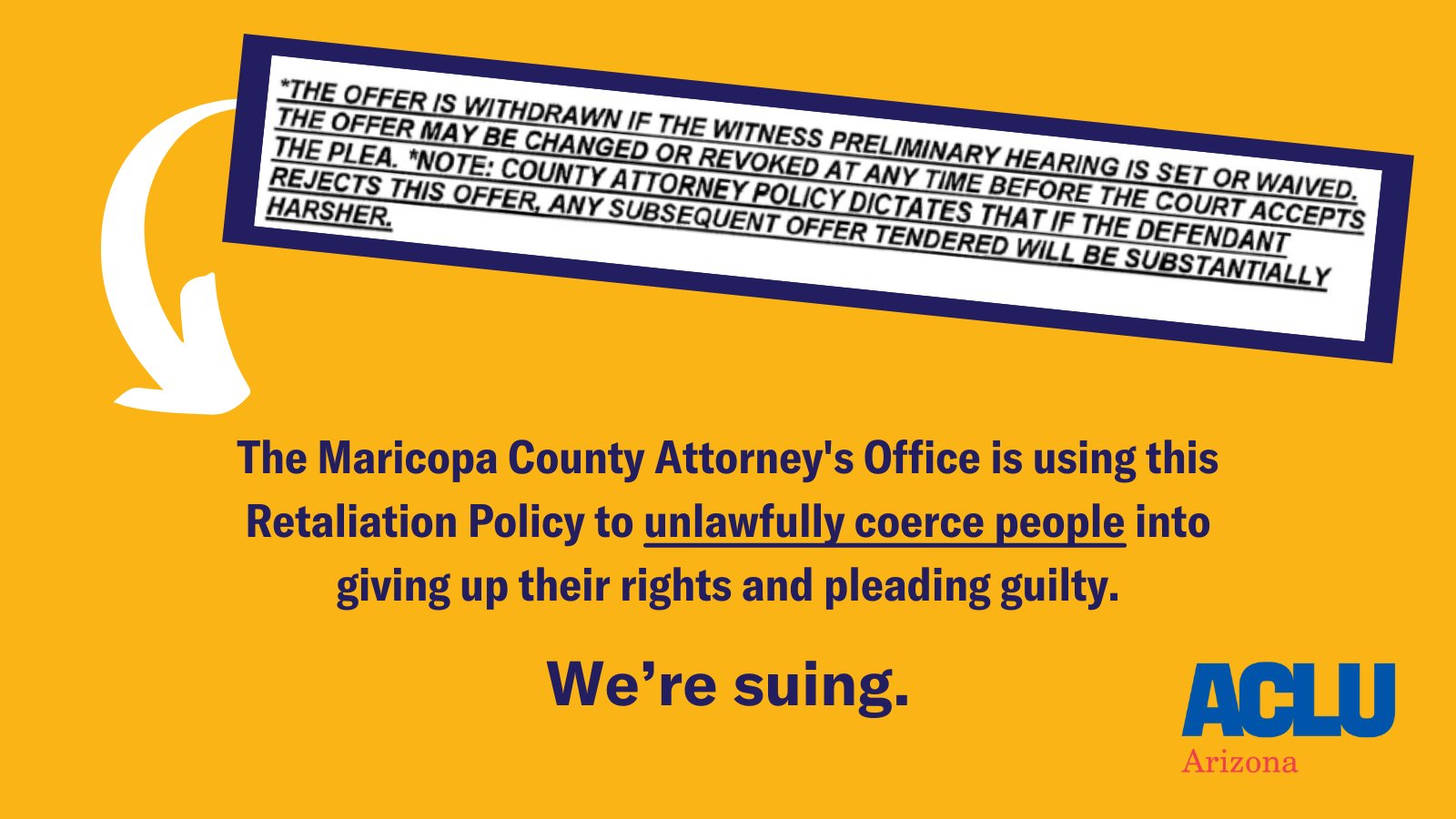 By Aakanksha Patel and Alexander Ramirez

PHOENIX, AZ – The American Civil Liberties Union national office and the ACLU of Arizona have filed a federal class action lawsuit here against the Maricopa County Attorney’s Office policy of making plea offers “substantially harsher” if someone exercises their right to a preliminary hearing or trial.

This “retaliation policy” may be responsible for thousands of guilty pleas every year and is contrary to the U.S. Constitution, the ACLU charged.

Meanwhile, Maricopa County prosecutors openly acknowledge that the purpose of this policy is to avoid the work of reviewing evidence or preparing for a trial.

Furthermore, the policy applies in Early Disposition Courts no matter the details of the case or if the person is guilty or not guilty.

Early Disposition Courts are courts that were initially created to move cases with minor offenses or drug possession through the system so as to help those in need of drug treatment and other services avoid convictions.

Yet, it is in these courts that prosecutors threaten people with harsher pleas if they were to deny the first guilty plea and exercise their right of a probable cause hearing.

Somil Trivedi, a senior staff attorney for the ACLU’s Criminal Law Reform Project, said “For too long, too many prosecutors have used pressure tactics and threats to extract quick, low-cost pleas and keep the crooked assembly line of mass incarceration moving. These tactics — like MCAO’s policy of punishing people simply for asserting their rights — mock the Constitution and hit marginalized communities the hardest.”

One of the plaintiffs includes a 34-year-old man who felt like he had to waive his right to a preliminary hearing in order to get more discovery.

Another plaintiff, a 61-year old man charged with selling $20 worth of drugs is being sent to prison for almost 10 years by prosecutors. The offer will get “substantially harsher” if he decides to assert his rights to a trial. In an extreme case, there is a story of an innocent man who was pressured into a guilty plea.

“These coercive pleas have serious consequences beyond sending people to prison- a felony conviction bans people from public housing, makes it difficult to secure a job, and can even bar people from voting,” said Jared Keenan, senior staff attorney for the ACLU of Arizona.

President of Arizona Attorneys for Criminal Justice, Louis Fidel, adds “It is clear that the Maricopa County Attorney’s Office is more interested in securing quick convictions than doing justice.”

The lawsuit seeks to stop MCAO’s retaliation policy and as a result, protect people’s constitutional rights.

Share:
Tags:ACLULawsuitMaricopa County Attorney’s Office
Previous : LA Times Podcast about Gascón Recall Interviews Critics, Supporters, Gascón
Next : San Francisco Misconceptions and Important Crime Statistics – What Do They Show and Why Should We Care?

Aakanksha Patel is a fourth-year student studying Communications at UCLA. She is from San Jose, California.