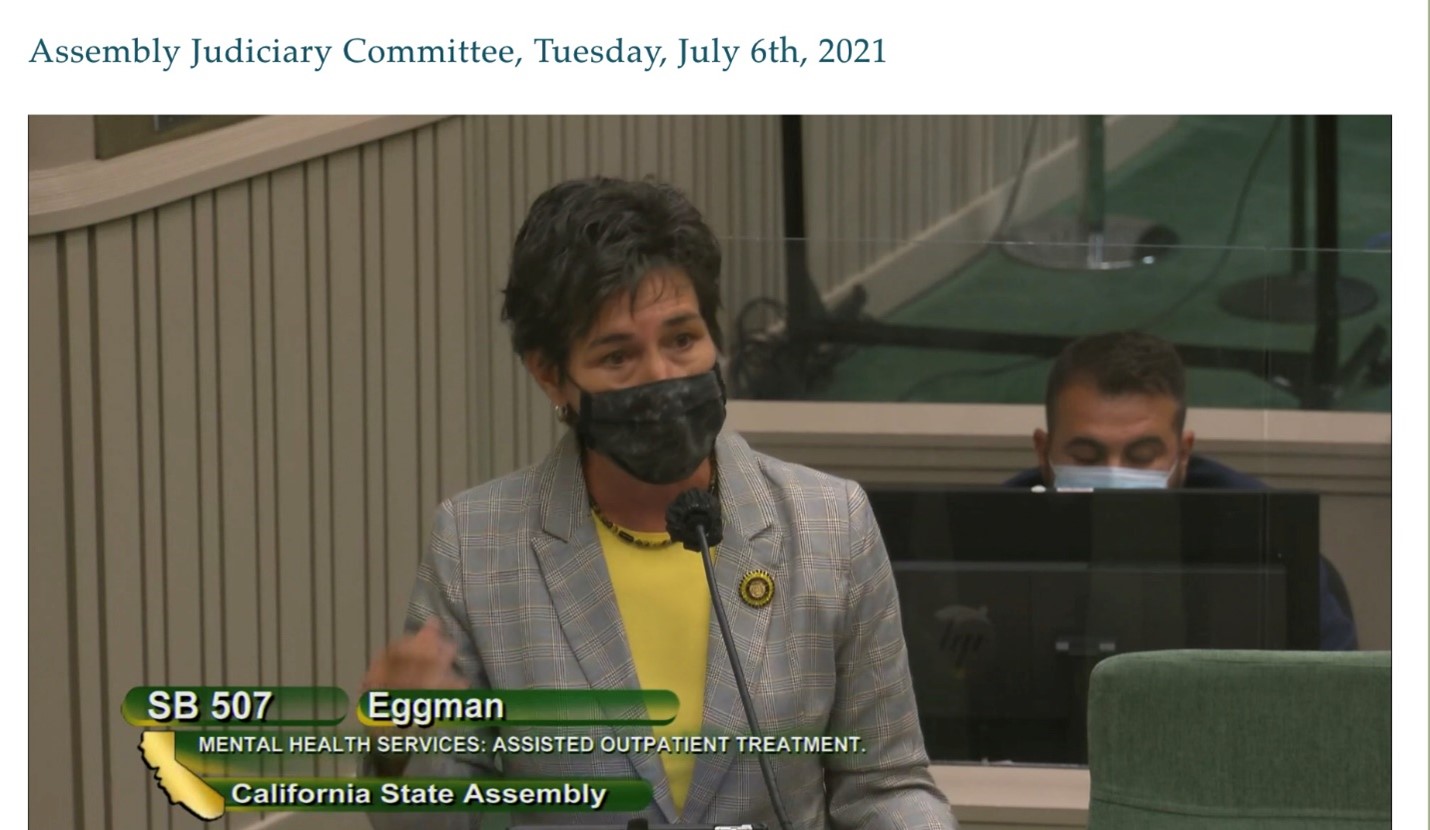 The Lanterman-Petris-Short (LPS) Act, signed into law in 1967, provides for involuntary commitment for the purpose of short-term treatment and evaluation of individuals with mental disorders under specified circumstances. (E.g., Welfare & Institutions Code sections 5150, 5250). The LPS Act also provides for the establishment of a conservatorship of individuals who are determined to be “gravely disabled.” The purpose of an LPS conservatorship is to provide individualized treatment, supervision, and placement for gravely disabled persons.

In 2002, the LPS Act was amended to establish the Assisted Outpatient Treatment (AOT) Project Act of 2002, also known as Laura’s Law, establishing a mechanism for courts in counties that opted to participate to order a person to receive assisted outpatient mental health treatment. The bill (AB 1421) was authored by then-Assemblymember Helen Thomson, whose district included the City of Davis.

SB 502 (Eggman) would amend the LPS Act to expand the criteria for AOT to include an eligible conservatee who is the subject of a pending petition for termination of a conservatorship under the Act to receive court-ordered AOT treatment,

Under current law, to order AOT the court must find by clear and convincing evidence, among other things, that the person is unlikely to survive in the community without supervision, the person has a history of lack of compliance with treatment for their mental illness, the person has been offered the opportunity to participate in a treatment plan by the director of the local mental health department, or the director’s designee, the person’s condition is substantially deteriorating, and participation in the AOT program would be the least restrictive placement

necessary to ensure the person’s recovery and stability.

Effective July 1 of this year, rather than applying only to counties that opt into the program, Laura’s Law is implemented statewide. Counties were permitted to opt out of providing AOT until 60 days prior to July 1st. Since Nevada County became the first county to implement AOT on 2008, and as of March 2020, 19 other counties, including Yolo County, have received approval and implemented an AOT program. Ten additional counties, including Sacramento County, are in the process of implementing Laura’s Law.

Gravely disabled is defined in the LPS Act as a condition in which a person, as a result of a mental disorder or impairment by chronic alcoholism, is unable to provide for his or her basic personal needs for food, clothing, or shelter. Current law deems a person as not being gravely disabled for purposes of a conservatorship if they can survive safely without involuntary detention with the help of responsible family, friends, or others who indicate they are both willing and able to help.

A July 2020 report on implementation of the LPS Act released by the California State Auditor recommended several changes and updates to AOT programs. (Lanterman-Petris-Short Act: California Has Not Ensured That Individuals With Serious Mental Illnesses Receive Adequate Ongoing Care (Report No. 2019-119; July 28, 2020.) The report found that individuals exiting involuntary holds have not been enrolled consistently in subsequent care to help them transition safely into the community while staying connected to vital resources. The report also found high numbers of individuals subject to multiple short-term (“5150”) holds have not received continuing care in the least restrictive settings, despite having successfully recovered their abilities to provide for basic needs at the time their conservatorships ended.

According to the author, SB 507 would update the eligibility requirements for AOT programs to capture those individuals who have cycled through multiple short-term holds, as well as those who have recently left conservatorships, allowing counties to provide effective treatment to individuals in the least restrictive setting.

SB 507 would modify the criteria for AOT to provide that at least one of the following is true:

SB 507 would, thus, broaden the criteria for being ordered into AOT by removing the requirements of current law that all persons must meet both of the following to qualify for AOT:

SB 507 would also expand eligibility criteria for receiving court-ordered AOT services to include eligible conservatees who are the subject of a pending petition for termination of a conservatorship under the LPS Act.

In its 2020 report, the State Auditor found that the current eligibility criteria for AOT precluded its application to individuals in existing conservatorships:

“Specifically, to receive this treatment, individuals’ conditions must be substantially deteriorating. Further, within specified recent time frames, either they must have been hospitalized or received services in a mental health unit at least twice, or they must have committed, attempted, or threatened serious acts of violence toward themselves or others as a result of their mental health conditions. In contrast, state law requires that conservatorships end when a court determines that individuals are no longer gravely disabled—in other words, they are able to care for their own basic needs. Thus, these individuals are unlikely to satisfy the criterion that they are substantially deteriorating. Because the requirements to exit a conservatorship are inconsistent with the eligibility criterion for assisted outpatient treatment, individuals are left without access to the type of help that could stop them from cycling through the crisis care system.”

According to Senator Eggman, the author of SB 507, the bill “will update the eligibility requirements for AOT programs to capture those individuals who have cycled through multiple short-term holds, as well as those who have recently left conservatorships, allowing counties to provide effective treatment to individuals in the least restrictive setting.” In presenting SB 507 in the Assembly Health Committee on June 22nd, Senator Eggman asserted that the bill “just does a little bit of cleanup.”

In fact, however, by expanding the criteria for eligibility for AOT, SB 507 is not a simple cleanup bill. It would significantly increase the number of individuals who could be mandated by a court to receive mental health treatment in outpatient settings. Perhaps the most significant expansion would be the inclusion of individuals whose conservatorships are being terminated.

Termination of a conservatorship occurs when an individual has a mental health conditions that has been stabilized and is not substantially deteriorating. They are no longer a danger to themselves or others. They have been determined to no longer be “gravely disabled”—that is, they are no longer unable to care for their own basic needs, with or without the assistance of responsible family, friends, or others who are willing and able to help.

What, then, is the ethical and legal justification for mandating outpatient treatment for these individuals?

In support of SB 507, the California Psychological Association said that it supports the bill because, among other things, “Changing the eligibility requirements by including a person’s treatment history and current behavior would allow counties to offer step down programs that would provide continued treatment and care to those individuals who would benefit the most.”

The Psychiatric Physicians Alliance of California (PPAC), sponsor SB 507, asserted that the State Auditor recommended AOT as step-down care for these individuals post-release but pointed out that current AOT criteria prevented the use of AOT in these situations because it requires a current deteriorating condition. Immediately after release from an LPS hold, PPAC concludes, these individuals would not be in a state of deterioration, even though there is a significant risk of deterioration in the future, and it is predictable given the individual’s history that they will cycle back through a series of involuntary holds. The California State Association of Psychiatrists (CSAP), in support of this bill, similarly asserts that about one in four individuals placed on conservatorships cycle back to restrictive settings, despite having successfully recovered their abilities to provide for basic needs at the time their conservatorships ended. CSAP concludes that this bill would clarify that when a person’s treatment history and current behavior make it reasonably likely that they are at significant risk for deterioration, they are eligible for an AOT program.

Aside from the speculative nature of these arguments in any given instance, it is one thing to require that transitional, step-down mental health services be available to individuals whose conservatorships are being terminated because they are no longer gravely disabled; it’s quite another thing to require that these services and supports be provided involuntarily.

The term “assisted” outpatient treatment has been criticized as being a euphemism for what is “involuntary” outpatient treatment. Opponents of Laura’s law, generally, are concerned that forcing people into outpatient mental health programs via the courts could have the effect of criminalizing and further stigmatizing mental health issues. In opposition to SB 507, specifically, Disability Rights California stated that it “opposes legislative efforts to expand involuntary mental health treatment to anyone who is not imminently dangerous to themselves self or others, or gravely disabled. Effective assistance comes from a collaborative effort between the recipient of treatment and the provider of treatment: “compliance” with treatment can’t be coerced.”

Eric Gelber, now retired, is a 1980 graduate of UC Davis School of Law (King Hall). He has nearly four decades of experience monitoring, analyzing, and crafting legislation through positions as a disability rights attorney, Chief Consultant with the Assembly Human Services Committee, and Legislative Director of the California Department of Developmental Services. He is a past member of the City of Davis Social Services Commission and a current member of the City’s Senior Citizen Commission.