Last week Governor Gavin Newsom signed into law the 2021-22 budget bill.  Among the programs was funding for the Resentencing Pilot Program, which will begin on September 1 and consists of nine counties.

According to a release from For the People, a national non-profit working with prosecutors to remedy unjust sentences, the funding will help implement Prosecutor-Initiated Resentencing (PIR). PIR is the process first developed by For The People to support prosecutors in looking back at unjust, excessive sentences.

“Since its inception, For The People has worked in partnership with community leaders, elected prosecutors, and public defenders to implement PIR. Now, as Budget Sponsors of the Pilot, For The People is supporting the

adoption of this process on a larger scale to reunite more families and restore communities,” a release stated.

Back in 2018, California’s legislature passed AB 2942, to allow a look back at and a remedy to unjust sentences.  AB 2942 amended Penal Code section 1170(d)(1) in order to allow the District Attorney to revisit past sentences to determine whether further confinement is no longer in the interest of justice.

The group cites that, thanks to this effort, “approximately 75 incredible people have returned home to their families and communities.”

“When I first conceptualized this law, I never imagined that California would invest millions of dollars in its implementation,” said Founder and Executive Director Hillary Blout. “After almost three years of working very closely with DAs and community leaders across the state, I am more confident than ever that this collaborative approach will allow us to safely bring more people home from prison. I’m thrilled that California is once again at the forefront of criminal justice reform, and we are eager to get to work.”

According to the release, “The diversity of these counties is intentional—not only in geography, but in voter base, prosecutor leadership, reentry resources, prison population, and incarceration rates. It will allow for the legislature to evaluate impact across a wide range of participants. Potential impacts include cost savings to the state, reinvestment in community resources, economic stimulation through workplace reentry, and more. “ 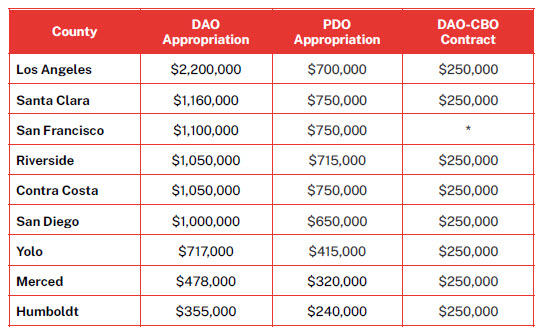 In addition to the above funding, up to $1,350,000 shall be available to the RAND Corporation to provide an evaluation and report of the County Resentencing Pilot Program to the Legislature.

Each DA’s office will be required to: 1) implement a written policy that outlines the processes used to recommend individuals for recall and resentencing; 2) recommend the recall and resentencing of incarcerated persons consistent with its written policy; and 3) direct all Pilot funds to the exclusive purposes of resentencing individuals pursuant to the Pilot, including, but not limited to, ensuring adequate staffing of deputy district attorneys, paralegals, and other support staff.

For the Public Defender’s office, each one will be “required to direct all funding to the exclusive purpose of supporting the resentencing of individuals pursuant to the Pilot, including, but not limited to, ensuring adequate staffing of deputy public defenders and other support staff to represent incarcerated persons under consideration for PIR.”

According to Contra Costa County, “The resources available to the participating counties will enable each office to better process requests for resentencing applications and evaluate a collaborative approach to conducting resentencing requests.”

The CCDA’s Office will create a written policy to recommend individuals for resentencing, have training for staff to understand the obligations under state law for resentencing, and track data for each request.

In their release, Contra Costa noted, “Most recently, our Office supported Christopher Hales’ effort to be resentenced under AB 2942 for his 1995 felony arrest for his third robbery. Mr. Hales was 21 at the time of his conviction. He was originally sentenced to 89 years to life in state prison. Mr. Hales is the second person in Contra Costa County to be resentenced under this law.”

“I was proud to support AB 2942 and this funding further strengthens my office’s ability to process these requests in a timely manner. Excessive sentences undermine our ability to hold the most violent accountable for serious crimes in our community. The strain on the state prison and criminal justice system is immense from these failed policies of our past,” said Contra Costa County District Attorney Diana Becton.

In a release from December, the DA’s office worked to reduce five years off a 14-year prison sentence for a 26-year-old Davis resident.

The man, who grew up in Davis, was convicted by a jury of a residential burglary on March 30, 2016.  At the time he committed the home-burglary, the man was on parole after recently being released from state prison on another case involving a burglary. His prison sentence included a 5-year enhancement for having been convicted of another strike offense in the previous case.

On December 3, 2020, Judge Hashimoto reduced his sentence as a result of a motion filed by Assistant Chief Deputy District Attorney Ryan Couzens.

The District Attorney’s request was possible due to a new law, AB 2942, which was signed by the Governor in 2019.  AB 2942 allows district attorneys to recommend reducing the sentences of inmates serving time in prison “in the interests of justice.”

The DA’s office has been working in partnership with “For the People,” and now will get funding to expand their resentencing.

In December, he rolled out his plan: “The sentences we impose in this country, in this state, and in Los Angeles County are far too long,” and he is proposing “judicial resentencing hearings after 15 years of imprisonment for all convicted people.”

He argues: “Justice demands that the thousands of people currently serving prison terms imposed in Los Angeles County under earlier, outdated policies, are also entitled to the benefit of these new policies. Many of these people have been incarcerated for decades or are serving a ‘virtual life sentence’ designed to imprison them for life. The vast majority of incarcerated people are members of groups long disadvantaged under earlier systems of justice: Black people, people of color, young people, people who suffer from mental illness, and people who are poor. While resentencing alone cannot correct all inequities inherent in our system of justice, it should at least be consistent with policies designed to remedy those inequities.”

Another DA, Chesa Boudin, has probably been the most active at filing 1170(d) motions.

Last summer, the Vanguard talked with Boudin’s office, and at that point Boudin had filed more resentencing motions under 1170(d) than the other counties combined.

Dana Drusinksy from the SF District Attorney’s office noted that this is a slow and careful process—designed more to right individual cases of overly harsh sentences rather than address systemic problems or immediate crises.

It can take weeks from start to finish to review someone’s case and have a resentencing hearing.

She also noted that some DAs in the state have been working with Hillary Blout from For the People to get help in trying to release people.

Throughout the Pilot period, two preliminary reports and one final evaluation and assessment will be provided to the California Legislature. The reports will allow for comparison between the Pilot jurisdictions.