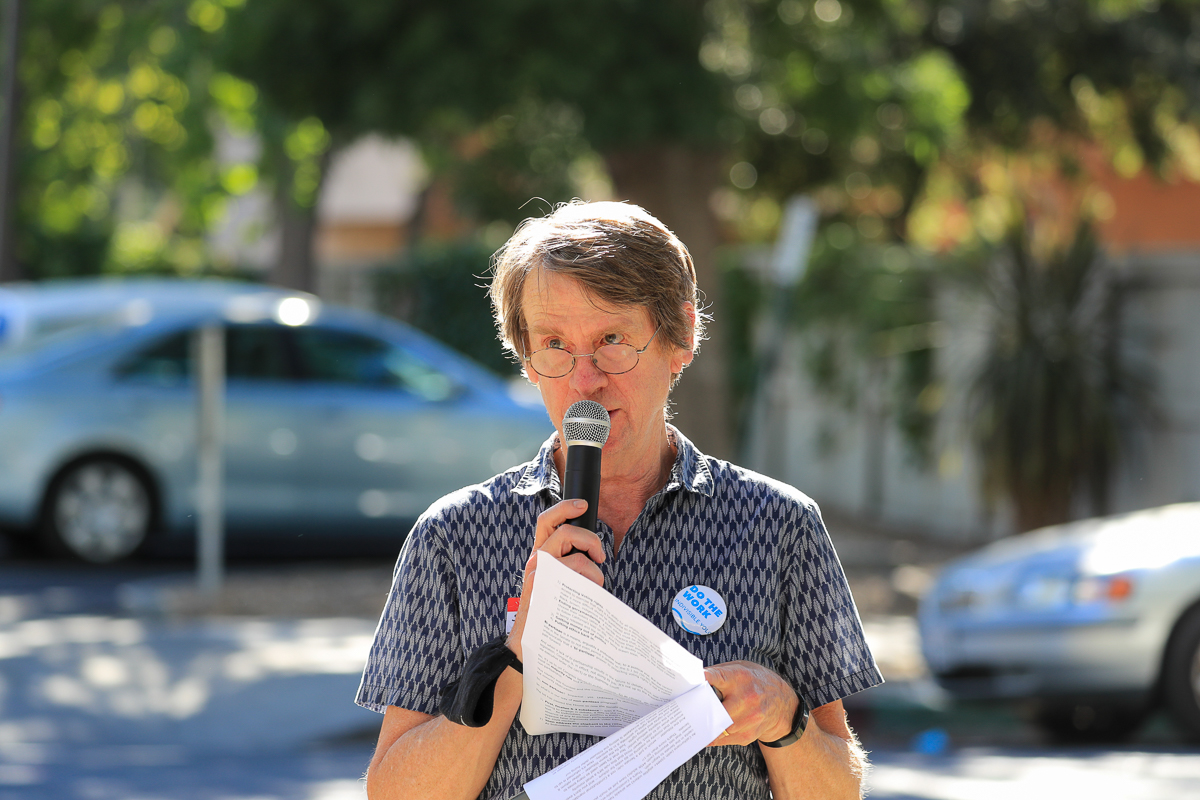 (Editor’s Notes: The following remarks were delivered Thursday at the rally with Representative John Garamendi.)

Welcome to the Davis Rally for Voting Rights.  Glad to see you all.

My name is Steve Murphy, a volunteer with Indivisible Yolo, a progressive activist organization responsible for today’s non-partisan event.

We’re here today with Congressman Garamendi and our allies in the fight to pass S-1 to thank him for his sponsorship of voting rights including HR-1 which passed in the House.  But that’s only half the battle.  To become law, S-1 must pass the Senate and be signed by a very willing President Biden.

To be clear, non-partisan does NOT mean bi-partisan.  It is defined literally as ‘impartial’ and ‘unbiased’ …more on that when we cover gerrymandering.

To me S-1, the For the People Act is about infrastructure. Not the roads and bridges stuff.  Rather, the infrastructure of democracy itself.

That infrastructure of democracy is under threat and needs immediate attention every bit as much as traditional infrastructure — and even more urgently. It is in need of a major refit – with more than 17 states enacting laws to suppress voter turnout.  Rather than building on the highest voter turnout on record last November, cynical power brokers are

trying to roll back the clock to an era many of us are too young to remember: Jim Crow.  And the gathering storm of partisan gerrymandering once the 2020 Census is released will just put that much more strain on the principles of majority rule undergirding our democracy.

And every element of the progressive agenda is under threat unless those cracks in our democracy are addressed now … in this Congress … at this moment.  Social justice. Economic justice. Climate change. All hang in the balance. That infrastructure of democracy cannot be left in shambles or leave people behind. Nor should it fall victim to partisan politics.

Every eligible voter must be able to participate equally. Every voter needs to be free to choose their representatives.

In non-partisan terms, S-1 bolsters the infrastructure of democracy and large majorities of voters including folks from both parties are very much in favor each of the key elements:

Bi-partisan is a means, arguably a preferable one, to a political end. But the recent vote in the Senate to not even permit a debate on the S-1 bill (50-50) demonstrates unequivocally that a ‘bi-partisan’ answer to protecting voting rights is not a viable path forward.

And when a lack of bi-partisanship results in the failure to debate much less create any legislation, Congress is, in effect, not doing its job. It’s not up to the President to do this via executive order (he can’t) or the Supreme Court

No, it’s up to us! Congress listens to public opinion. So as citizens, we must rise up, insist on majority rule and a path forward not borne in bi-partisanship but in non-partisanship.

This country was founded and the Constitution framed to provide for majority rule — not minority obstruction.

So what’s in our way of non-partisan progress?

The bill has passed the House so now the Senate must act:

As Californians (with 25MM+ eligible voters) we already have less of a voice per capita in the Senate to begin with.  That’s a Constitutionally-enabled minority power that lets Wyoming (with 445K adults) have just as much power in the Senate.  That’s more than 50:1!!

And the filibuster — which is just a Senate rule; not a Constitutional mandate —  amplifies that minority by insisting on 60 votes for cloture — and you don’t even need to show up to object. Never mind that this rule let’s a small minority obstruct the majority without limits!  Nor that it’s been used so many times to block civil rights and voting rights.  Just fix the damn filibuster — either reform it now just for voting rights or eliminate it in its entirety.  How it’s reformed is up to the Senate! What’s not acceptable is letting the filibuster defer fixing our democratic infrastructure.

For those who worry about what happens when the majority party changes so ‘we’ are on the wrong side, I say ‘make elections fair’ and then go out and win them.  As activists engaged in promoting progressive policies and who work hard to get out the vote for politicians who will pursue those policies, the fight to protect voting rights is our highest priority ….

In short, we must not get so caught up on what might happen that we can’t address what is right in front of us ….

We believe Majority Leader Schumer when he says “failure is not an option” — and we’re holding him to that. That means our goal is simple: we want a vote on the Senate floor on a filibuster rules change so that the Senate can pass S.1.

We also know that today both President Biden and Vice-President Harris are pressing the case for voting rights with groups in Atlanta and DC.  So please don’t give up — call your Senators daily.  It’s easy .. and we provide a script on our linktree or on our flyers.

And, today, we have our very own Congressman, John Garamendi, here to share his thoughts on this important issue and perhaps give us a little inspiration and some insight on what’s happening in Washington.

Welcome, Congressman and thank you again for your support.

Share:
Tags:For the PeopleIndivisible YoloJohn GaramendiVoting Rights
Previous : Guest Commentary: Food Assistance Has Tripled in Yolo County in the Past Year – Here’s How We Can Continue to Meet These Critical Needs
Next : City of Sacramento Shot Down by Court in Attempt to Chill Free Speech of Critical Progressive Activist

36 thoughts on “Guest Commentary: In Support of the For the People Act”