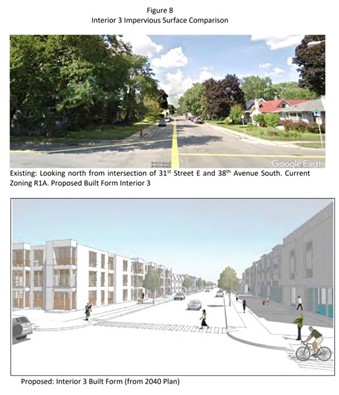 As more Sacramentans from all over the city have become aware of CA State Senate Bills 9 & 10 and the Sacramento draft 2040 General Plan proposals to eliminate single family zoning and neighborhoods as well as onsite parking requirements, their concerns have increased.

Eliminating existing single family neighborhoods, home to a wide diversity of racial and economic groups, among other things will impact people’s lives, the environment, and existing infrastructure.

SB 10 would allow cities and counties to both:  approve up to 14 units on single family lots without environmental review and to undo voter-approved protection of open space and urban boundaries.

All of these proposals cut out the public hearing process, which means neighbors get no notification and no input. Sacramento’s

None of these proposals require that the housing be affordable, rather they fall back on unproven “trickle down theory” that increasing market rate housing will magically, somehow, eventually result in some units being affordable.

The City of Sacramento also claims without any evidence, that ending single family zoning will right the wrongs of past discriminatory practices.

As Chris Jones writes in Equity, Affordability and Upzoning:

“Regarding the idea that upzoning increases supply and makes housing more affordable, there is evidence that it in fact does the opposite. In 2013 and 2015, Chicago created a natural experiment by upzoning large sections of the city, allowing higher Floor Area Ratios (FAR), eliminating parking requirements, and increasing allowable housing density. [An MIT study of this upzoning concluded] first, there is strong evidence that upzoning increases the property prices for existing single-family homes and that second, there was no evidence for short or medium term increases in housing unit construction.”

Jones’ comments are echoed by Vancouver, BC professor, planner and author, Patrick Condon, who told more than 160 California community leaders at the Livable California Teleconference on Feb. 6, 2021 that “upzoning” of neighborhoods drives up housing costs and cannot create affordable housing.

Addressing the legacy of housing discrimination

The truth is that redlining and racist Codes, Covenants, and Restrictions caused discrimination in housing, NOT single family zoning or neighborhoods. Blaming single family zoning is like blaming the existence of high schools for students not getting the same quality of education.

The problem is not that we have high schools, it is the inequitable investment in education and attention to student needs. Correlation does not equal causality.

As noted above, SB 9 and 10 would allow even higher densities, between 8-14 units per single family lot.

City planners and some Council members seem oblivious to the reality that single family homes and neighborhoods are desired by people regardless of race or economic status. As noted by housing advocates Cynthia Davis and Susie Shanon, in their LA Progressive article, Oppose SB 9 and SB 10: Why Do Politicians Want to Take Away Homeownership from Communities of Color?:

“In California, politicians and developers are attacking single-family home zoning. Yet they suspiciously ignore that homeownership is a crucial tool for communities of color to build wealth. Politicians should not take that away by banning single-family zoning: people of color will suffer serious consequences.”

“Our homes have been sanctuaries that people know they can always return to, and we plan to pass our homes to our children so they can build wealth. We also are very engaged in our community because we have a vested interest as homeowners. Our homes, in a real way, give us political power and a voice at the table.

But state and local elected officials in California–and across the United States– now seek to alter single-family zoning so that big developers can rush into middle- and working-class communities of color, demolish single-family homes and build pricey, market-rate apartments in their place.”

The city’s claim that building multifamily units in an affluent neighborhood will allow people from groups, who previously could not live there, to move in is both unfounded and reminiscent of past race-based housing discrimination. New multifamily units in more expensive neighborhoods will also be expensive, not affordable to lower income households and probably not even to moderate income ones.

To suggest that lower income members of a racial group, denied the ability to buy a house in a particular neighborhood in the past, should now be happy with not being able to afford to rent there is at best insulting.

Further, even if a few people could move from an amenity-poor neighborhood to an amenity-rich one, what about all those still left in the less affluent neighborhood? If the goal is to provide equity, then all of Sacramento’s neighborhoods need to be desirable places to live with safe streets, good schools, parks and other amenities.

Cities and counties are required to demonstrate in their State-mandated Housing Elements that they can accommodate the Regional Housing Allocation Needs (RHNA) numbers of housing units assigned to them by the California Department of Housing and Community Development (HCD).

In a study released in December 2020, the Embarcadero Institute provides documentation that HCD greatly exaggerates by nearly a million, the number of housing units needed in Sacramento, the Bay Area and southern California. Orange County is now suing the state over these numbers and Bay Area local governments have filed appeals claiming the housing need numbers they have been assigned are far too high.

Sacramento’s planners say the city needs “missing middle housing” but ignores corner duplexes, grandfathered multifamily units, and the ability of all single family lots to have up to two accessory dwelling units (ADUs).

According to the Sacramento Area Council of Governments, most ADUs are affordable. Since they are smaller scale, they are also more likely to be built by a homeowner than an outside developer to whom 4-14 unit developments offer greater profitability.

Both Sacramento and the State’s proposals to eliminate single family zoning are one-size-fits all. Though Sacramento city planners and some council members have said that Sacramentans don’t have to worry, there won’t be that many of these multifamily built in single family neighborhoods, the truth is there is no limit on how many can go into any given neighborhood.

At a June 30 community forum, Assemblymember Kevin McCarty continued this misrepresentation, saying that he “did not see investors coming in and tearing down streets”.  Sidestepping concerns raised by his constituents at the forum, McCarty also appeared unaware of the current drought and City water conservation efforts, saying that water shortages are “not as much of an issue for development in Sacramento.”

City planners showcase duplexes and triplexes in their power point presentations, neglecting to mention that the City’s proposal would allow up to 6-plexes and that existing state law already allows up to two Accessory Dwelling Units, which means that any single family lot could already have a defacto duplex or triplex.

Because they are smaller, ADUs are more affordable as noted above and can also potentially fit into existing neighborhoods with less impact.

Significant housing development can also be accommodated the hundreds of miles of underutilized commercial corridors in the State. These can be developed with well-thought out multifamily housing and appropriate infrastructure without disrupting existing single family neighborhoods.

We all are aware of the exorbitant prices increases not only of single family homes but also in rents. Local and state policy and decision makers need to carefully study and address the impacts of trends such as corporate buying that means fewer and fewer people have the security of homeownership.

These are documented in a number of recent articles, including: How corporations are buying up houses — robbing families of the American Dream.  Author Larry Getlen writes:

“Corporate homeownership can not only subject tenants to higher living costs, but often destroys their ability to buy these homes themselves, as companies pay top dollar to take them off the market.
As a result, America is quickly becoming a renter nation.”

The Wall Street Journal reporter Will Parker writes about single family subdivisions being built for rent not sale in Built-To-Rent Suburbs are Poised to Spread Across the U.S.

“In the past few years, the model has taken off around Phoenix and elsewhere—and is likely to become a dominant force in the rental housing market in the coming years, with implications for the communities that surround them, and the nature of home ownership.”

What about the environment?

General Plan 2040’s Housing Element and SB 9 and 10 would eliminate yards, turning neighborhoods from green to grey. Vegetation helps reduce air pollution and heat as well as providing habitat for birds, insects and animals. For a good picture, see, Green or Grey, Yards or Concrete.

The claim that eliminating single family zoning will help preserve open space is fantasy. Preserving open space requires mandates and land acquisition. Removing people’s ability to live in urban single family neighborhoods just pushes them to the suburbs. Even SB 9 will not reduce the urban sprawl that is gobbling up California’s open space and agricultural lands.

Citizens are questioning the City’s claims that upzoning will not have environmental impacts. A challenge to the Negative Declaration has been filed and includes an inquiry about the impacts on the aged collective sewer system that serves many older neighborhoods whose densities could increase 5 to 6-fold under the proposed 2040 General Plan Housing Element.

The Sierra Club, Center for Biological Diversity, and Environmental Defense Center and others are on record in opposition to SB 10.

Over the objection of many neighbors and neighborhoods, the city of Minneapolis upzoned all of its single family neighborhoods. Neighbors who sued because the city’s Environmental Impact Report did not adequately address the impacts of upzoning recently won a court battle.

“In an effort to alleviate the affordable housing crisis, the city is offering my community smaller, crappier housing for no less money, with the added insult to injury of making it harder for them to buy a house and build generational wealth within their own community.”

Pier’s skepticism remains as she today notes that the city of Minneapolis still lacks data to show that its experiment in upzoning has done anything other than raise prices and increase displacement.

Absentee investors are on the rise, notes Pier, and their cash offers are preventing existing community members from becoming homeowners. Property taxes are increasing 15-20% a year, driving up rents and thereby displacing residents (both renters and owners on fixed incomes) whose incomes cannot keep pace.

Eliminating single family zoning is an experiment lacking justification and evidence. It is also has the ability, like poorly done urban renewal of the past, to create damage that is hard to undo.

SB 330, passed by the CA legislature in 2019 prohibits local governments from downzoning any residential property until 2025, when the bill sunsets unless SB 8 extends that date to 2030, or the legislature decides to again ban downzoning. This means if Sacramento upzones all its single family neighborhoods, it is stuck with the fallout until at least 2025, possibly 2030.

44 thoughts on “Guest Commentary: The Many Downsides of Ending Single-Family Zoning – A Progressive’s View”