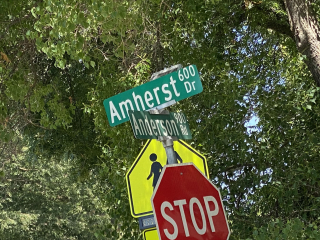 Since George Floyd’s death just over a year ago, Americans have taken to the streets raising their voices against racial oppression. A new desire to reckon with racism has arisen in our country. One form this has taken is in reevaluating the naming of buildings and places, though this reevaluation of names also predates the rise of the BLM movement. For example, in 2017 Yale changed the name of one of its residential colleges which had been named after Vice President Calhoun, an infamous white supremacist. The University of Virginia renamed its law school away from that of a former confederate general. Closer to home, UC Berkeley renamed two of its buildings in 2020 to move away from the names of former faculty members with slave holding ties or well documented white supremacist views. (link)

Sometimes this has been controversial. In San Francisco the school district recently voted to rename 44 public schools, but then later rescinded the decision.

A few years ago in Davis we debated the appropriateness of “Sutter Place,” and ultimately renamed part of it to Risling Court after David Risling, Jr., a civil rights activist and founder of DQ University (link). But, the City left both Bidwell Street and Place, named after John Bidwell, Sutter’s business manager. The Davis Sutter Hospital also still lists its address as Sutter Place.

Clearly, street names with a problematic legacy are not easy or quick to change, but it is time we look hard at the names of other streets and institutions in Davis. This would be an excellent job for the Historical Resource Management Commission, or a specially appointed committee. In the meantime, here is my first look at the subject. We have a few problematic street names in Davis and some serious issues of omission.

Covell Blvd. and Covell Place are both named for C.A. Covell. “At the Council meeting of June 7, 1943 Mayor Covell expressed his support for Army General DeWitt’s proposal not to allow Japanese nationals or citizens to return to California after the war. It died for lack of a second.” (John Lofland, Davis: Radical Changes, Deep Constants p.118) Then, “Mayor Covell called a special meeting for June 21 in which to consider a revision that applied only to Japanese nationals. it was adopted unanimously by the four members present.” (Lofland, p.118) Covell also supported anti-Asian legislation in 1940 when he backed a Chamber of Commerce proposal to enact laws making it more difficult for “Oriental” retailers to do business in Davis (Lofland, p.117). That certainly seems like enough to cause some serious reevaluation.

There are other streets named for local historical figures that I have not researched; it is something worth doing.

In Davis we have several neighborhoods that have streets named after universities. Amherst is one such street that has a problematic name. Amherst is named after a college that is named after a town that is named after Lord Jeffery Amherst, a former British general who proposed giving smallpox blankets to Native Americans during the Seven Years War. In 2015 Amherst College voted to no longer have Lord Jeff Amherst as its mascot (link). It has also been proposed that the town of Amherst change its name. It is worth Davis reevaluating the name of this short street.

Citadel is named for Citadel College in South Carolina, a military college that didn’t admit women until 1995. Ten years later, 1 in 5 female Citadel cadets reported being sexualy assaulted. (link) Does this warrant a change? Is it what we want to honor in our community? It probably at least warrants evaluation.

There may be other problematic street names but these are the ones I know about. There are likely more that warrant reconsideration. Even this act of discussion and reconsideration is a positive step towards reconciliation.

What came to strike me most about Davis’s street names is not so much the few streets with problematic origins – it is that large parts of town are named for private colleges and universities, many of which were predominantly or exclusively white and male for much of their history. Racism is not always a commission of specific acts. Prejudice and discrimination can take the quieter form of omission. There is an omission here in Davis.

To be fair, Radcliff, Sweet Briar, Simmons, Wellesley, Mills and Scripps are all historically women’s colleges, though they are the minority among the street names.

The bigger question is, where is Morehouse, Spellman, Xavier, and Howard and or other historically black universities? (Howard Way on the UCD Campus is named for Walter L. Howard, the founder of the UC Davis Pomology department). Grambling Court is the only street in Davis that I am aware of that is named for a historically black school and it is a tiny isolated cul de sac most people have probably missed. There is a serious omission here.

Considering one of the first tribal colleges or universities was located between Davis and Winters, one might expect a DQ way, or Diné College, place. These names are missing too. There is a Navajo street named for a Navajo national monument in the national park street neighborhood. Interestingly there is a discussion in the Navajo tribe as to what is the better name, Navajo or Diné (link). Naming a street or streets for a tribal college would be a stronger statement.

There are likely other colleges and universities that warrant inclusion as potential street names as well. It is worth further consideration.

We can do better here. We can demonstrate inclusivity by naming streets in new developments like Bretton Woods and Nishi with more inclusive names.

While we are discussing names, let’s not ignore how ludicrous it is that the Davis City Council is allowing a portion of the community to be named for a monetary management system begun in 1944 establishing the US dollar as the dominant international currency. (link) This name is completely out of step with other neighborhood names in Davis and should be changed as soon as possible before any of the project is built.

Renaming a development before ground is broken, and naming new streets to demonstrate inclusivity is easier than renaming existing streets. It is a good and easy place to start and the City Council can take action right away to set this in motion. Looking at renaming existing streets is more difficult but is certainly worth further investigation at a minimum.

Colin Walsh is a longtime Davis resident who serves on the Tree Commission.