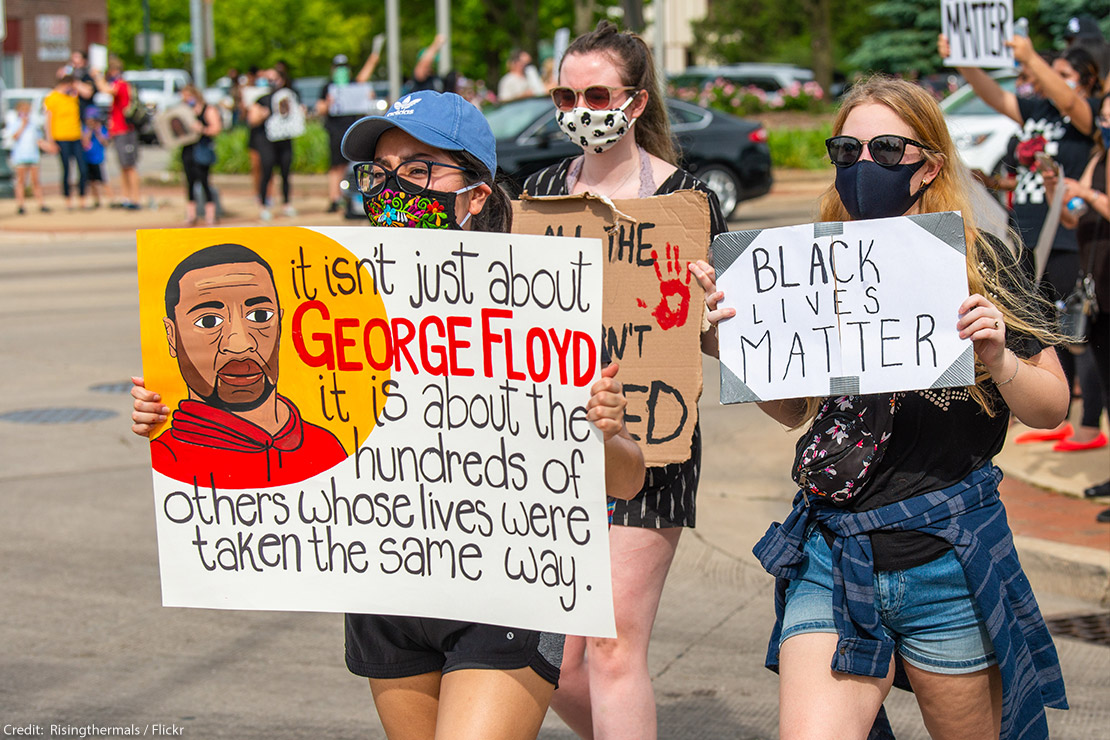 It’s now up to the Biden administration to take bold action on international human rights and racial justice.

By Christine Eldabh and Jamil Dakwar

More than one year after the brutal murder of George Floyd at the hands of police, it is clear that international accountability is critical to complement and bolster domestic efforts to dismantle systemic racism in law enforcement in the United States.

Last month, the United Nations High Commissioner for Human Rights Michelle Bachelet released a highly anticipated and historic report detailing the “compounding inequalities” and “stark socioeconomic and political marginalization” that Black people and people of African descent in many countries, including in the U.S., continue to face. The report found that “no State has comprehensively accounted for the past or for the current impact of systemic racism” and called for a “transformative agenda” to uproot systemic racism and address law enforcement violence against Black people and people of African descent.

The report, which references the U.S. more than any other country, calls for “reimagining policing and reforming criminal justice systems that do not keep racial and ethnic minorities safe and which have consistently produced discriminatory outcomes for Africans and people of African descent” and urges states to address racial profiling in law enforcement, the militarization of law enforcement, and the lack of accountability and transparency regarding police violence.

Building on the momentum of the report, Bachelet formally presented her report and agenda for transformative change to the U.N. Human Rights Council last week. There is, she said, “an urgent need to confront the legacies of enslavement, the trans-Atlantic slave trade, colonialism, and successive racially discriminatory policies and systems, and to seek reparatory justice.”

Advocates immediately recognized the groundbreaking nature of this report and the impact it could have — if the U.S. actively responds. In a video statement on behalf of the ACLU, Collette Flannigan, executive director of Mothers Against Police Brutality, commended the U.N. High Commissioner for “listening to the voices of families of victims of police violence and centering the lived painful experiences of people of African descent more broadly” and called on the Biden administration, Congress, and state and local governments to heed the report’s recommendations.

U.N. member states, led by the Africa Group, also saw the need to capitalize on this moment. In a landmark resolution adopted by consensus the Human Rights Council, the U.N. will create an independent expert mechanism to focus on examining and combating systemic racism worldwide, especially in the context of law enforcement.

Up to the last minute, former colonial powers such as the United Kingdom pushed for a weaker resolution, but an unprecedented international coalition of civil society organizations and NGOs — many of which are led by Black women — successfully urged the council to maintain the core elements of the resolution. The pillars of the resolution call for enhanced global accountability for human rights violations by law enforcement against Black people in the U.S. and globally, and an investigation into the impacts of slavery and colonialism on contemporary forms of systemic racism. This is monumental step toward international accountability for systemic racism in law enforcement.

Following the adoption of the resolution, Secretary of State Antony Blinken released a statement pledging the Biden administration’s cooperation with the new expert mechanism, as the ACLU and the Leadership Conference on Civil and Human Rights have been demanding.

For years, the ACLU and civil society organizations have urged administrations to extend similar invitations to thematic human rights experts. In 2019, the ACLU, the National Council of Churches, and a diverse civil society coalition called on the Trump administration to extend an invitation to the U.N. Special Rapporteur on contemporary forms of racism. The ACLU also led a coalition effort which called on the Obama administration to invite the U.N. Special Rapporteur on torture to visit U.S. detention facilities and prisons, including Guantanamo Bay.

The Biden administration’s invitation to U.N. independent experts signifies a new chapter of U.S. engagement with its international human rights bodies, particularly on racial justice and equality. We are encouraged by the administration’s promise to cooperate with the new international probe on systemic racism, but the U.S. government must take further action to confront the impacts of slavery and Jim Crow on systemic racism in the U.S.

The significant actions taken this week by the highest international human rights body signals a turning point in the struggle against racism and racial discrimination worldwide, and the scourge of systemic racism against Black people, particularly in the context of policing. The implementation of the historic U.N. resolution, which is informally but aptly called the “George Floyd Resolution,” coincides with the 20th anniversary of the Durban Conference Against Racism, which must continue to guide the global fight against racism. The resolution’s implementation should be followed by the creation of a U.N. Permanent Forum on People of African Descent, and work specifically to remedy past and current racial injustices through acknowledgment, recognition, reparations, and guarantees for non-repetition of the crimes against humanity of slavery and the trans-Atlantic trade in enslaved Africans. The onus is now on the Biden administration to lead by example in the work to dismantle systemic racism.