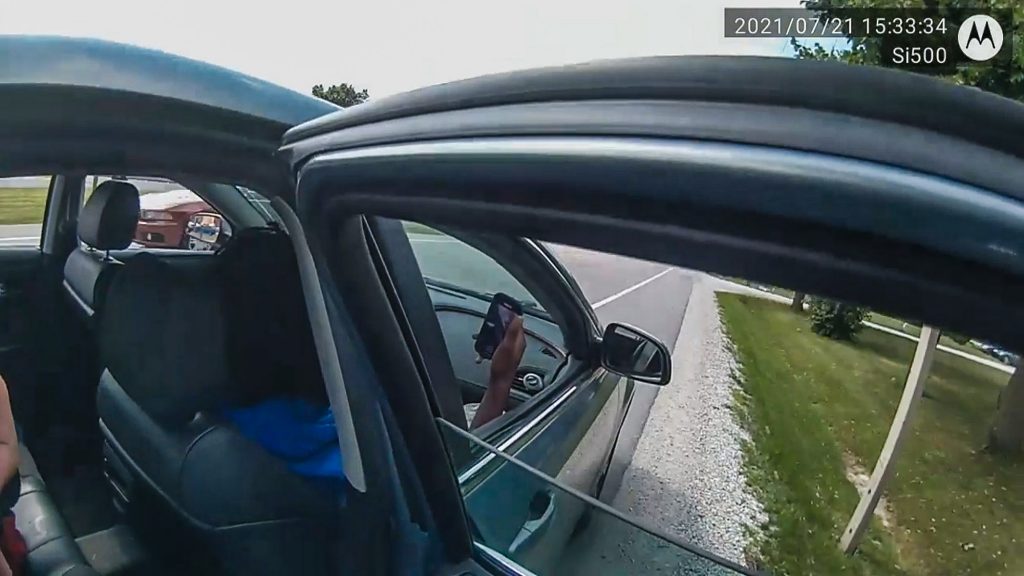 CALEDONIA, WI — Two separate video accounts of a seemingly routine traffic stop have gone viral, as the Village of Caledonia Police Department launched an investigation into allegations of its officers planting evidence.

On July 21, officers pulled a vehicle over for driving at 63 miles per hour in a 45 mile-per-hour zone. While the driver and rear passengers of the vehicle identified themselves and were removed from the vehicle, the front passenger declined to identify himself and remained in his seat.

The front passenger, Facebook user “La Savoo,” posted a video Saturday of an officer throwing an empty plastic bag onto the back seat of the car.

In the video, La Savoo is heard asking the officer, “Hey bro, what’s that?”

The officer responded, “What’s what?”

La Savoo replied, “What you just threw in here. I got you on camera, bro.”

The passenger claimed in his social media post that this was, “First time ever seeing a cop try to throw [something] on me just to get [a] reason to search the car.”

The original post garnered over 103,000 shares on Facebook, with commenters urging Caledonia Police to look into the incident further.

The Caledonia Police have since posted their videos of body camera footage, allegedly showing that the officer found the plastic bag in a search of the passengers.

In these videos, an officer is shown searching one of the passengers after asking them to exit the vehicle. The officer appeared to search the passenger’s pockets, and allegedly found the plastic bag and a phone charger on his person.

The video continued to show the searching officer hand the plastic bag to another officer, who then returned to the vehicle and appeared to throw the bag on the back seat.

After La Savoo asked the officer what he threw on the seat, the officer can be heard stating that the bag was “…in his pocket and I don’t want to hold on to it.”

The officer continued to state, “It’s all on their body cam that they took it off of them,” and maintained that the bag was not going to cause him trouble.

The Caledonia Police made a post on Facebook following La Savoo’s post attempting to clarify the situation, stating, “Since there were NO DRUGS in the [plastic bag], the officers discarded the empty packaging material in the vehicle. This is what was observed in the video.”

The post continued, “While we would discourage officers from discarding items into a citizen’s vehicle, the video is clear that the officer is NOT planting evidence or doing anything illegal. Additionally, the empty [plastic bag] is not itself illegal.”

The police ended the post with an assurance that they were launching an internal investigation, reviewing about six hours of body camera footage from the traffic stop. Officers also clarified that no arrests were made, and that the driver was given a speeding ticket.

The videos have since garnered attention from public figures and civil rights groups, including civil rights attorney Ben Crump.

Crump took to Twitter to address La Savoo’s footage, stating, “Caledonia PD Officer Mathew Gorney captured on video tossing a clear plastic bag into a Black driver’s vehicle. Caledonia PD has launched an investigation into the incident; however, this is a CLEAR example of police abusing their position of power.”

Though it is unclear if Crump saw the police body camera footage before posting, this social media response comes as no surprise to civil rights activists, who are well aware of Defund the Police protests and demonstrations that rise out of such incidents.

Though the Caledonia Police Department is conducting an internal review of the traffic stop, the uproar has not ceased on social media and users are continuing to demand a release of the six hours of additional body camera footage.

Caledonia Police Chief Christopher Botsch told one news network, “We are still reviewing to determine specific facts of the investigation itself.”

Police stated that they will release the extended footage shortly, and to look for further Facebook posts regarding updates on the investigation.

Allison is a rising senior at UC Davis, majoring in History and Political Science. She is originally from Clovis, CA, and is pursuing a career in civil rights and/or constitutional law.