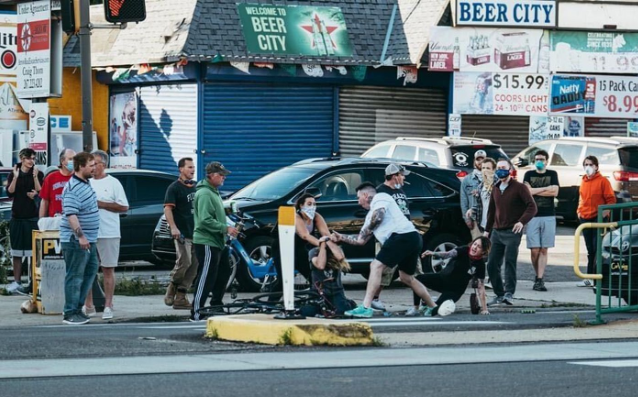 By Carson Eschen and Dario McCarty

PHILADELPHIA, PA — Richard “Richie” Goodwin has been arrested and charged for assaulting a cyclist who had shown solidarity with the Black Lives Matter protests in June of last year.

The decision comes after an investigation by the District Attorney Office’s Special Investigations Unit, which found Goodwin to be the culprit of the alleged assault.

On June 1, 2020, Philadelphia was swept with BLM protests standing in solidarity with the Minneapolis protests following the killing of George Floyd. The victim in question marched with a group on I-676.

The group was stopped by police, and broken up with tear gas. Afterward, the victim was cycling to Fishtown, a Philadelphia neighborhood, when he passed by a face-off between other BLM protestors and a group of mostly

white men, including Goodwin. The latter group were armed with baseball bats, purportedly to “protect” the 26th District police.

According to the Philadelphia DA’s office, the victim then “raised his fist in an apparent show of solidarity” with the BLM protestors. In response, several members of the other group began throwing water bottles and shouting threats at him.

Goodwin allegedly ran at the complainant, threw him off his bike, and repeatedly punched him in the face.

Multiple bystanders attempted to intervene, while other witnesses took photos of the assault. These photos were shared with news outlets, as well as Philadelphia’s Special Investigations Unit (SIU).

Philadelphia’s District Attorney, Larry Krasner, who was elected in 2018 on a platform of criminal justice reform, has officially charged Goodwin with Assault and Reckless Endangerment.

“Our investigation has identified Richie Goodwin as the individual responsible for violently throwing a person off his bike and onto the ground, and repeatedly punching him in the head until his ear and face bled,” said DA Krasner.

“The apparent provocation for this violent crime was that the victim—heading home after being teargassed alongside hundreds of civilians by Philadelphia Police on I-676—had thrown his fist up in solidarity with fellow Black Lives Matter supporters in his community.”

Krasner said violence and property destruction from both sides of the 2020 Black Lives Matter protests would not go unprosecuted.

“Just as our city and nation continue to reckon with systemic racism and injustice, the Philadelphia DA’s office continues to investigate incidents of property destruction, burglary, harassment, and violence that occurred during the historic uprisings of 2020,” said Krasner. “We will not tolerate violence in the name of movement protest or in the name of ‘protecting’ the police.”