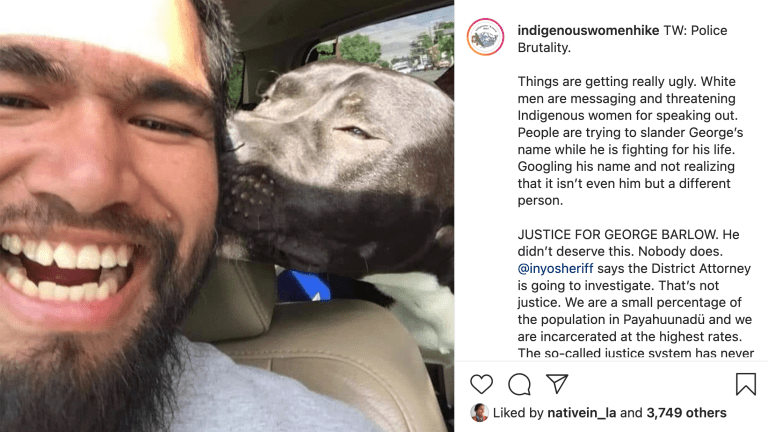 INYO COUNTY, CA – A Native American man here was attacked, according to eyewitnesses, and beaten with clubs, fists and Tasered by Sheriff’s Dept. deputies last Saturday—deputies also shot and killed a pit bull while attempting to take 32-year-old George Barlow, III, into custody.

Deputies were dispatched to look into a report of a domestic violence restraining order violation. However, they were not able to locate the suspect or the reporting party.

But then they spotted Barlow, who is now on life-support in the hospital.

“While looking in the area,” deputies reported to have noticed an “agitated” male subject across the street at a closed Chevron station.

The police report of the incident depicts the deputies approaching Barlow, and Barlow allegedly asking, “Can I kill you, too?”  Barlow then allegedly charged the deputy with his pit bull, despite orders from the deputies

to stop, they claim.

When Barlow was 10 feet in front of the deputy, a Taser was deployed. However, the Taser had no effect on Barlow because of the sweater he was wearing.

Barlow proceeded to remove his sweater, and was Tased by the second deputy at the scene. The impact of the Taser caused Barlow to fall to the ground, but he removed the darts from his chest before the deputies were able to handcuff him.

The deputies then transitioned to a baton and started hitting Barlow. Barlow allegedly grabbed the baton and commanded his dog to attack the deputies.

During this, both deputies received dog bites, and ended up shooting and killing the dog. Barlow was pepper sprayed, which caused him to charge at the deputies once again, they claim.

A canine was deployed to subdue Barlow until an additional officer from the Bishop Police Department arrived and was able to handcuff Barlow.

The report also stated that Barlow was given medical aid until an ambulance arrived and was medically cleared before being transported.

However, eyewitness reports have differed from the official press release given by the Sherriff’s Department.

A video posted to social media has shown the dog jumping at the police officers as one officer was dragging and trying to wrestle the baton out of Barlow’s hands. The officers were also shown to be hitting Barlow with their hands during the altercation.

Once Barlow had let go of the baton and was attempting to distance himself from the deputies, a deputy was also heard yelling, “I’m going to shoot you” while Barlow was calling out for help.

The audio in the video also includes bystanders yelling to the police officers to stop hurting Barlow and to call off the K9 police dog that was attacking him while he lay on the ground.

The videos that have been posted have sparked community outrage about the actions of the deputies, and have garnered hundreds of comments.

Barlow is currently on life support in the hospital, and a GoFundMe started for his family has raised $18,360.

An investigation with the District Attorney’s Office is expected, and witnesses are in the process of being contacted.

15 thoughts on “Native American Man on Life Support After Deputies Beat and Taser Him, and Kill His Dog”