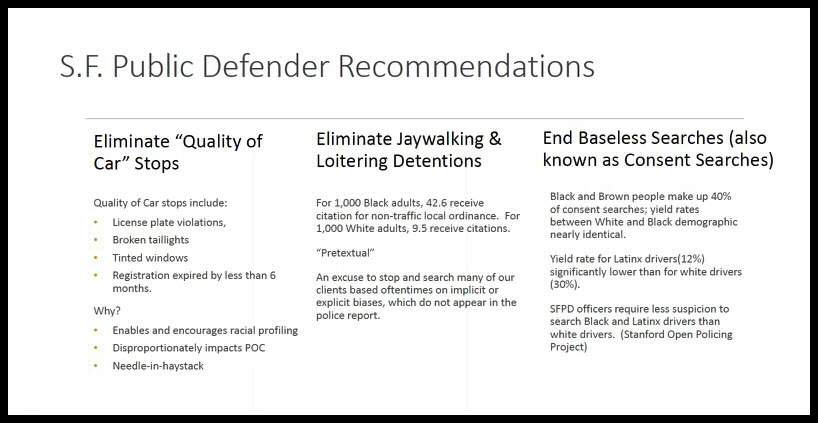 Across the country in the year since the killing of George Floyd, communities have looked to change the way policing is done.  So far, the city of Berkeley has one of the more sweeping measures to stop police from doing low-level traffic stops which are often pretextual in nature.  The San Francisco proposal would take it a step further.

“Almost any driver or pedestrian, if observed for long enough, will commit a low-level traffic infraction,” the policy notes.  “A traffic stop, then, can become a way for officers to investigate the driver or passengers for evidence of otherwise not obvious criminal activity.”

And yet, stops like these, pretextual stops, are completely legal and “have been sanctioned for more than 25 years” by the 1996 Supreme Court decision, Whren v. United States.

But research has shown that these kinds of traffic stops, while harassing and disruptive to communities of color, are largely ineffective at catching actual crimes and can lead to escalation, violence and even police killings.

“Sandra Bland, Daunte Wright, Rayshard Wright, Philando Castile, Walter Scott, and Sam Dubose should all still be alive. All were killed by police because of

From 2015 to 2019, there were at least 135 unnamed Black men and women who were killed by police during such stops.

Frank Baumgartner, who studies policing and policing tactics, labels traffic stops of this sort a “needle-in-the-haystack strategy” to detect crime, and thereby becomes “an incredible waste of effort.”

A recent study out of Nashville, in collaboration with the Stanford Computational Policy Lab (SCPL), reached a similar conclusion.  That report found that, while a disproportionate number of Black people were pulled over in Nashville on proactive traffic stops, such stops rarely led to an arrest or the recovery of drugs and weapons.

“For every 1,000 non-moving violation stops, just over two percent (or 21) resulted in an arrest, or the recovery of drugs or other contraband. An additional 61 stops (6.1 percent) resulted in a misdemeanor citation for a non-drug related charge,” according to SCPL’s report.

The report concluded that, because there aren’t any benefits, all social costs should be avoided altogether.

The San Francisco policy document argues that “on balance there is little logical nexus between improving public safety and enforcing some low-level traffic laws.”

The SF Report concludes: “Pretextual stops harm community relations, waste resources, and far too often cause those already fearful of law enforcement to flee, leading to unnecessary force or violence. The pretextual stops can lead to further inquiries unrelated to the traffic stop—such as questions related to probation or parole status—that disproportionately impact communities of color and have been banned in other local jurisdictions.”

What traffic stops do well, however, is “funnel people of color into the criminal legal system.”

They write, “Research proves that pretextual stops play an outsized role in ensuring that ‘driving while Black’ remains an unfortunate reality in the United States and increases the opportunities for racial profiling.”

Moreover, “The Court’s failure to condemn it contributes to decisions like Whren. Even when controlling for location, time of day, and other factors, Blacks are still stopped and searched at higher rates than whites in the same area because officers use ‘visible cues to determine the likelihood of criminality . . . that cause an overly great focus on young men of color.’”

San Francisco mirrors the state and nation in over-policing communities of color via traffic stops.

The data on how Blacks are impacted is telling:

In order to “minimize the disproportionate harm and violence communities of color experience because of how SFPD officers enforce traffic laws” there are three primary proposals.

“Quality of car” stops “focus on what a car looks like rather than the driver’s behavior and are misguided.”  They note that the cost is “severe” with cars towed for unpaid tickets, lapsed registrations, and huge accrued fines.

“The financial burden falls harder on Black households that are the victims of a “quality of car” stop,” they note.

Second they call for the elimination of enforcement of jaywalking and similar low-level violations which research shows “over-policing infractions such as jaywalking has little demonstrable impact on reducing crime but instead has significant, overlooked downsides.”

They write: “Jaywalking and other common traffic infractions are common among all racial/ethnic groups but can be used as a tool to question, harass, or search a detained person.”

They call on police to “cease stops and detentions for “jaywalking” and other similar minor infractions absent other obvious criminal activity that gives an officer probable cause to effect an arrest.”

Finally they call for ending “baseless searches during traffic stops.”

Baseless searches are “essentially random searches (at best) and are only marginally effective when compared to other readily available and less-intrusive investigative tactics.”

They call for the elimination of the use of consent searches during traffic stops.