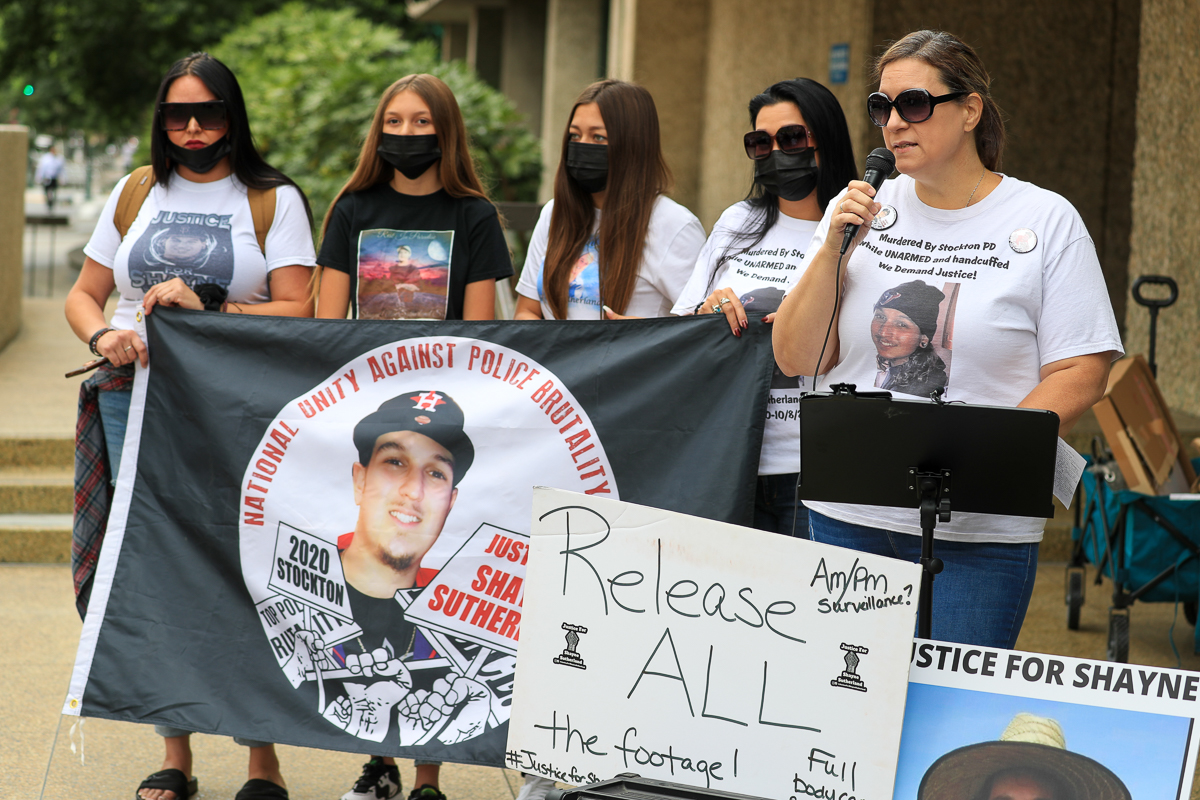 “The reason I’m out here today…  is because I have not gotten any transparency from Stockton PD or the DA’s office,” Shayne’s mother, Karen Sutherland, said on Monday.  “The only thing they’ve released to me and the public are the edited body cams.”

According to the account from the family, Sutherland, 29, died in a manner similar to George Floyd, prone, with a police officer on his back, handcuffed, while yelling, “I can’t breathe,” and calling out for his Momma.

He had called 911 the morning of October 8, 2020.  While being questioned in front of a store, Shayne jumped up after hearing a noise, only to be tackled by law enforcement. After close to three minutes of forceful pressure on Shayne’s back, while Shayne was lying face down on the concrete, unarmed, handcuffed, in the prone position, he was in distress and could no longer communicate.

Family members have called for the release of the recordings and asked for the San Joaquin District Attorney’s office to hold the officers accountable.

The father of two, who also had three stepchildren, was described as hardworking and a family man, involved in the lives of his children and stepchildren.

“He was a very hard worker. He was a journeyman for the glaziers and glass workers union local 169, when he got laid off of that job because of COVID,” his mom explained.  “He went to Alaska and he was a commercial fishermen. And that wasn’t even a job to him because he loved it so much.”

His mother felt that the death was unnecessary.

“I feel that my son should have treated fairly and with respect and not belittled like he was that day and treated the way he was,” she explained.  “He surrendered to them. He was apologizing to them and he was telling them several times I can’t breathe. I can’t believe I’m dying.”

“Help, mama,” she said.  “Calling out for me.  But they ignored him. Why did they ignore him? How do you ignore somebody that’s begging for their life?”

She explained that he was very honest with police, that he acknowledged he was doing drugs, he asked for help but that the police overreacted to a sudden twitch and then failed to respond to him when he was in medical crisis.

“Things need to change,” she said.  “They need to be held accountable.  I’m asking that the police department and that DA Tory Verber Salazer, please be transparent.”

She wants to see the two officer from the Stockton Police Department be charged.

Also speaking was Marissa Barrera, a woman from Woodland, whose brother Michael Barrera died at the hands of the Woodland Police in 2017, similarly complaining that he could not breathe, only to have police mock and ignore him until it was too late.

Barrera explained that she had founded the group, Voice of Strength, to allow families who have lost loved ones to police to be able to tell their stories and counter the false narratives by police.

Karen Sutherland was first contacted out in front of the police station protesting by herself when others found her and helped her organize.

Barrera was there with Michael Barrera’s daughter.  She was 10 when her father was killed, now she’s 15.

“He was killed in a very similar way to Shayne,” she said.  “Even the edited version (of the video of Shayne Sutherland) show murder.  They’re guilty and they should not be on the street.”

Michael Barrera’s daughter, Michelle, said,  “Murder is murder whether you have a badge or not, because of those cops, I have to live the rest of my life without my dad.  I still have to wake up every day saying like, is this real?  But it is.”

That’s all she could say before she broke down crying.

Karen Sutherland added, “That is Michael Barrera’s daughter.  You see the impact that it causes on these kids.”

Another of the mothers came up to speak about their own son’s killing at the hands of police.  Many of them also lenr support to Karen for the loss of Shayne Sutherland.

Darlene Ruiz for example noted that her son, Trevor Seever, was shot and killed in Modesto.

“The DA works closely with the police. There’s a conflict of interest. You can’t depend on the DA to stand by you and get justice from a police officer. It doesn’t work,” she said.  “The DA needs to not handle these cases.  It needs to be the Attorney General.”

She said, “Cops should not be immune from the consequences of murdering our children. And for too long, we’ve allowed it, there’s way too many George Floyds out there.”

In that case, the Stanlislaus County DA charged the officer, Joseph Lamantia, with one count of voluntary manslaughter, meaning he is facing potentially 11 years in prison.

Ruiz said that her son was the fifth person that Lamantia had killed.

“He shot somebody six weeks before he shot Trevor.  He shot and killed three people in 2016.  He has since been fired.  He has been charged with manslaughter, but it should be murder,” she said.

Some of the speakers acknowledged that Tori Verber Salazar has a reputation for being reform minded.  But they remain frustrated at the slow pace of the investigation and the lack of transparency.

According to media accounts, a police sergeant could be heard screaming, “Get down to the ground.” Morales later slid his gun toward the officer after he was ordered to.

“They got the wrong man,” Marysa Morales, the sister of Augustine, told ABC10. “There’s somebody still out there on the loose that actually shot.”

His mother told the media she believes her son stayed behind to protect people at the event.

“Because he would definitely be a protector,” Roxanne Morales said. “That’s is natural instinct.”

Karen Sutherland told the families and media that she has read the transcript but cannot bear to watch the video of her son’s death.  However, Roxanne Morales has watched the video.

“Shayne did nothing wrong,” she said, “nothing.

“Something did spook him,” she said.  “You hear a click.  That is when Shayne gets up, because he was sitting in the position they told him to be in.” 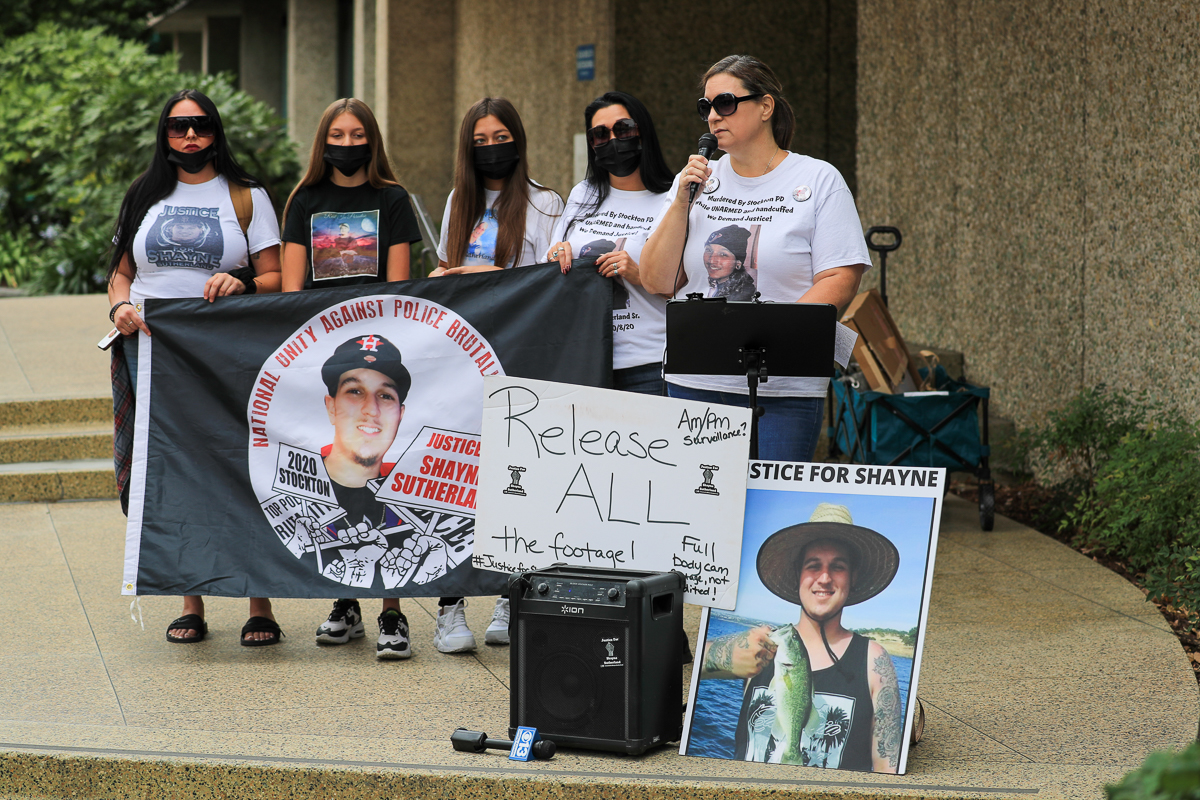 She argued that he had a right to get up, he was not under arrest at that point.

“There’s no reason that shouldn’t be here today. None. He had every right to walk away every right. And I will stand behind this mother until I am no longer breathing,” she said.

Neither the police nor the DA’s office would comment to the Vanguard about the ongoing investigation.

Elisa Bubak, the PIO from the San Joaquin County DA’s office, issued a statement to the Vanguard: “The San Joaquin County District Attorney’s Office is dedicated to ensuring public safety, equitable justice for all, and advocating for victims. Transparency is a key component to strengthening trust with the community we are privileged to serve.”

She added, “Shayne Sutherland’s case is under investigation. Further inquiries regarding body worn camera footage should be directed to the Stockton Police Department.”

Meanwhile, Joseph Silva, the PIO for the Stockton Police stated, “This incident remains and open multi-agency protocol investigation and is still under review by the San Joaquin County District Attorney’s Office.  Pending anticipated litigation, we cannot discuss this matter any further.”

For Karen Sutherland this was as unnecessary as it was tragic.

“He wasn’t trying to run, something spooked him,” she said.  “He stood up and they slammed him to the ground.  It ultimately ended in his death after he kept telling them several times I can’t breathe. I can’t breathe. I’m dying and calling out for mama and they ignored him.”

About his children, “They have to go to the cemetery to visit their father. It’s horrible. I mean, this is, this is something that nobody, no parent, no child should ever have to go through.” 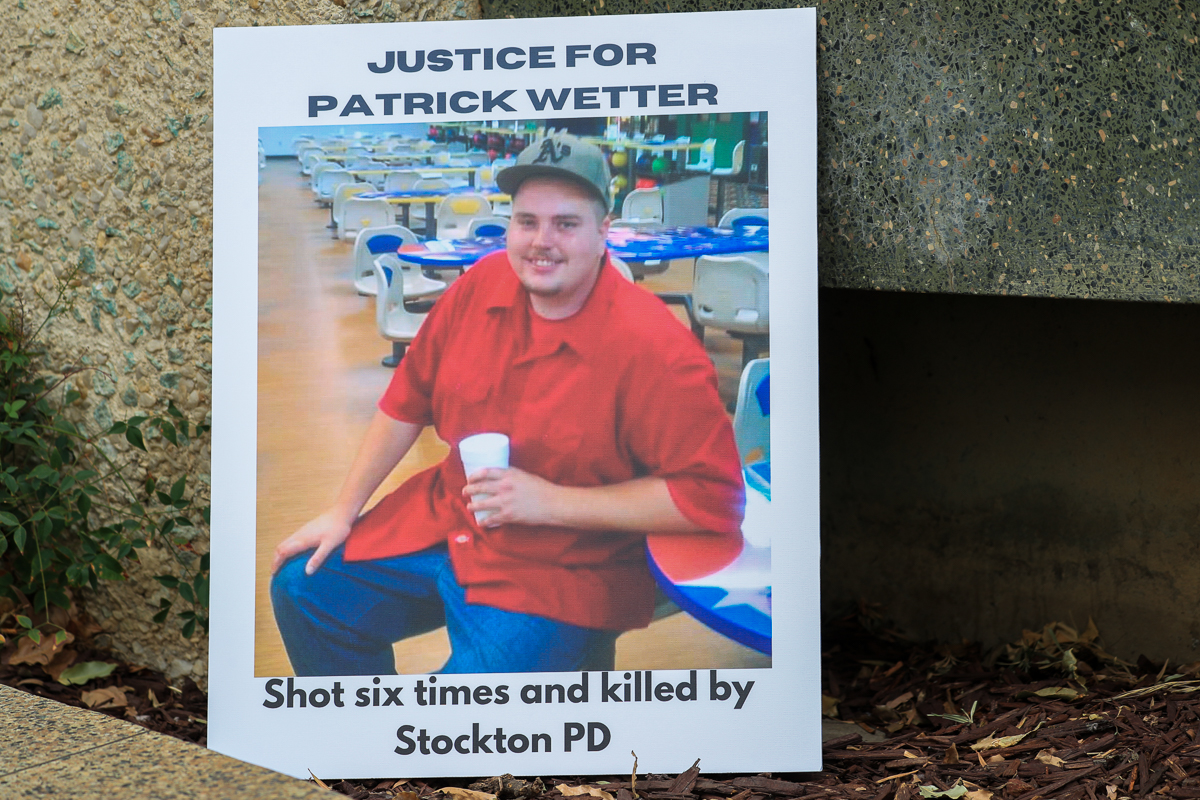 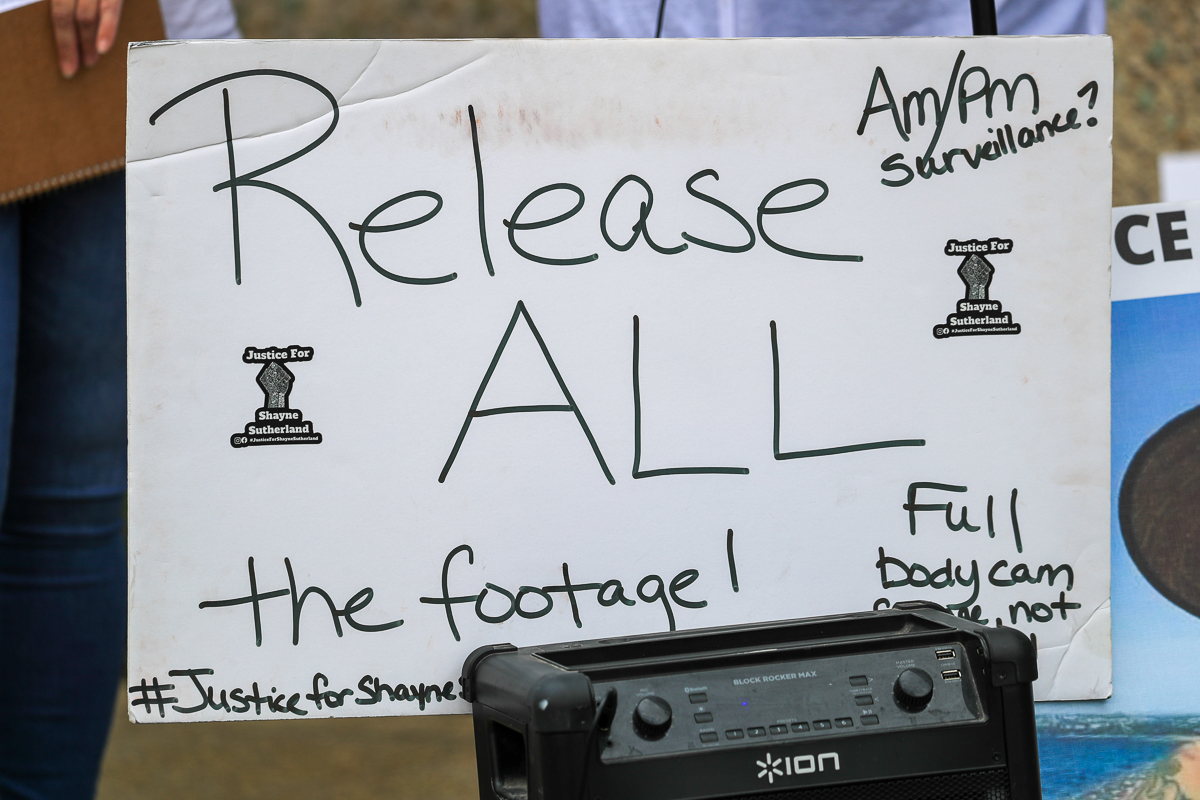 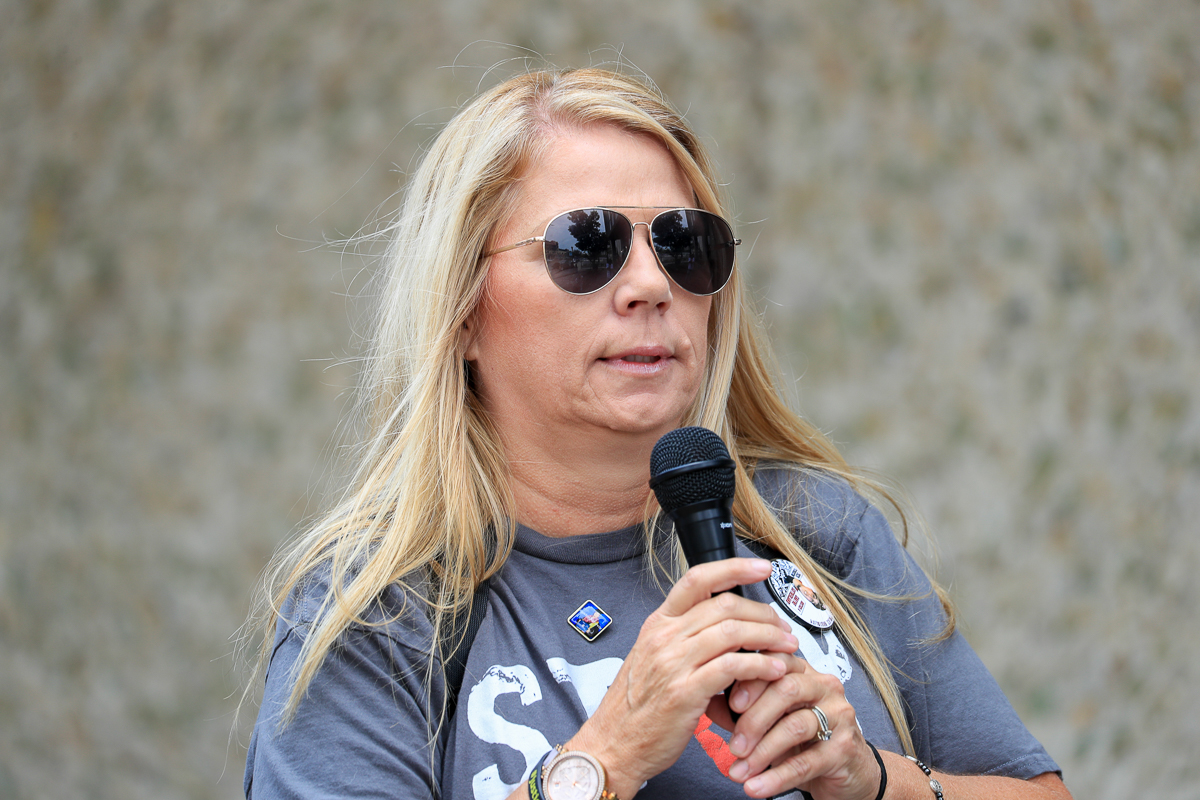 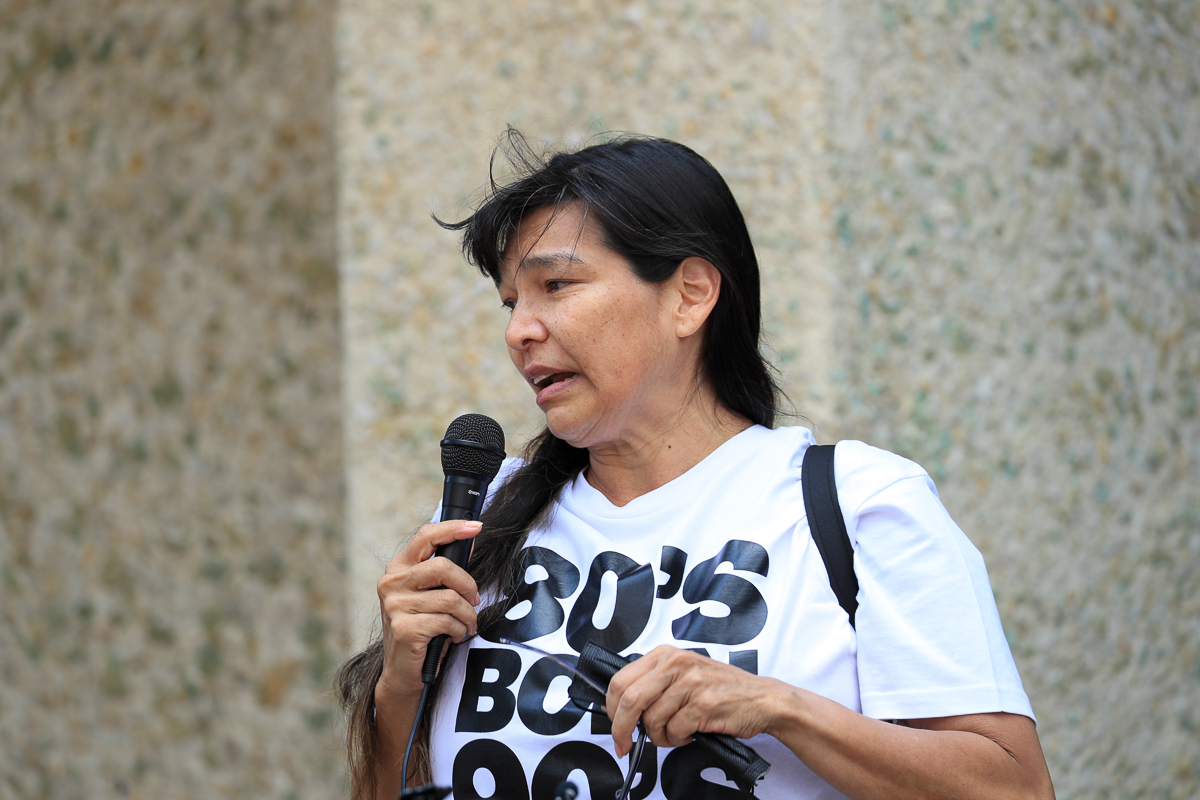 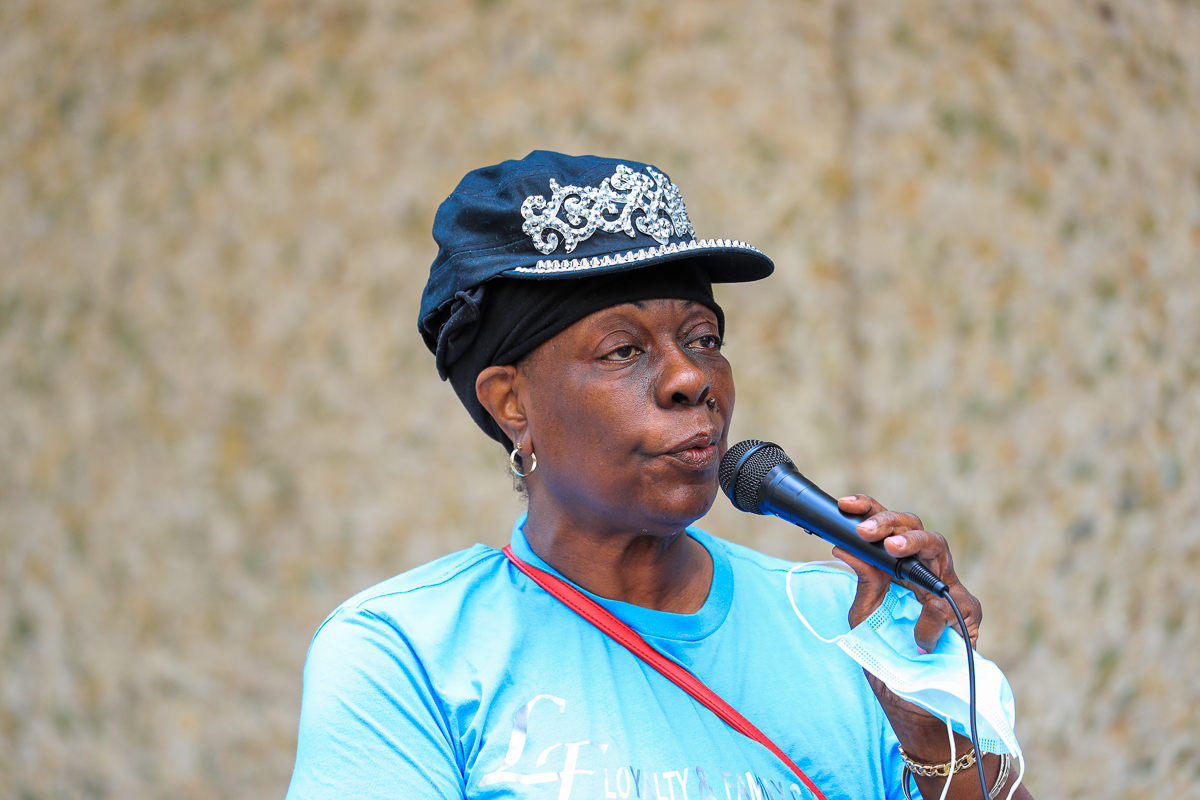 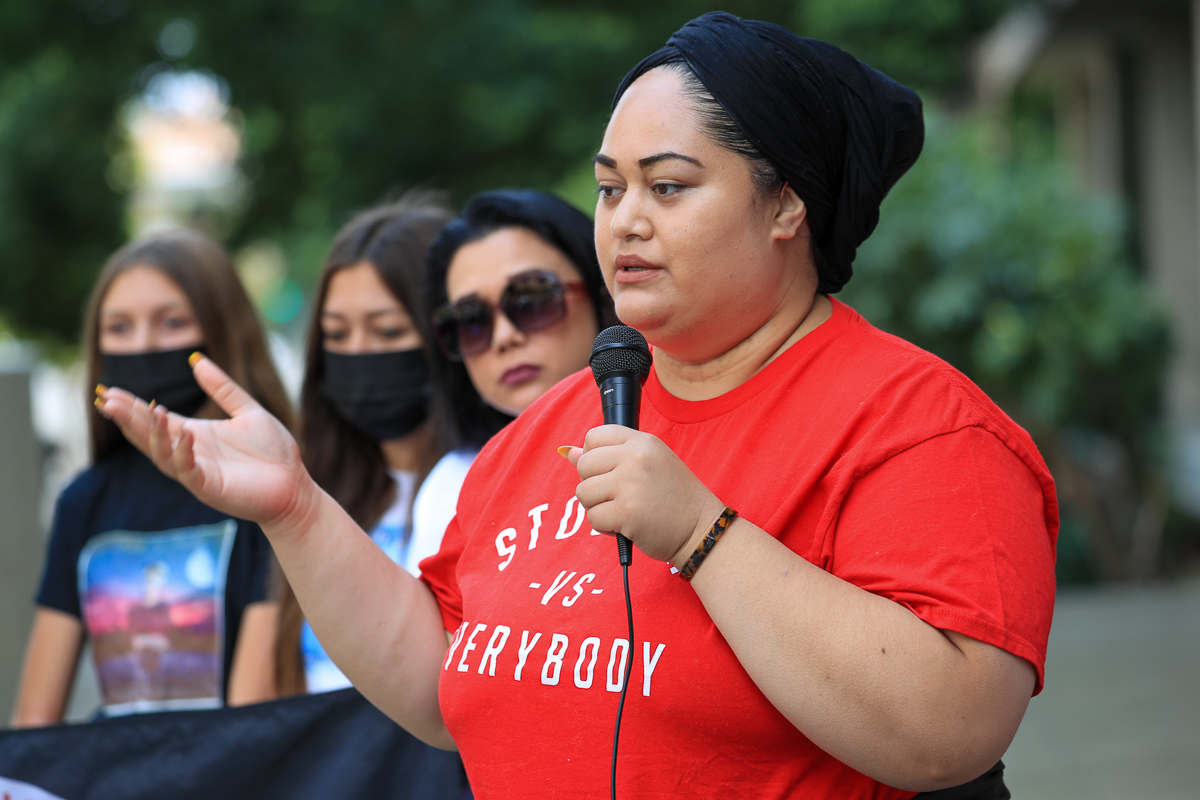 26 thoughts on “Stockton Community, Family Members Demand Answers in the Killing of Shayne Sutherland by Police”