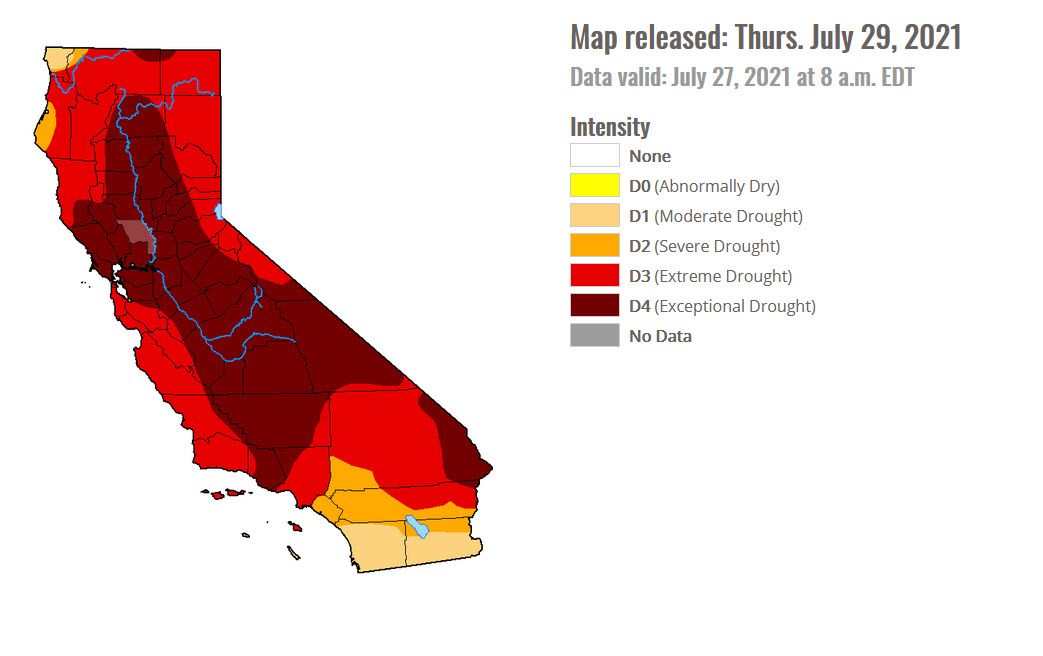 Woodland, CA – While California is used to a cycle of drought, floods, and fires, this drought is exceptional and, while it has largely been an inconvenience to larger cities, experts are warning that a growing number of communities are facing threats to water supplies.

The Mercury News reported on Friday that “it is already imperiling an alarming number of communities, especially between the Bay Area and the Oregon border, threatening the water supplies for more than 130,000 people.”

Moreover, “The severe shortages are not just in small towns and rural hamlets that rely on one or two wells or streams that have run dry. Larger towns, with their own reservoirs and water departments, are in trouble too.”

As a result, Yolo County has issued an emergency proclamation due to exceptional drought conditions in the unincorporated areas of the county and urges all residents and businesses throughout the county to immediately begin conserving water.

“Due to little rainfall, historically dry conditions, and exceptionally warm temperatures in April and May, Yolo County is in an ‘exceptional drought,’ characterized by dry wells, depleted

reservoirs, and nearly dry surface water leading to insufficient water for agriculture, wildlife, and urban needs,” the county reported in a release on Thursday.

“The severity of the drought in Yolo County highlights the need to take simple actions to conserve water to ensure sustainable water supplies,” said Chair of the Yolo County Board of Supervisors Jim Provenza. “As a community effort, we ask that residents do what they can to conserve water.”

In May, Governor Gavin Newsom added 41 counties, including Yolo County, to the State’s drought emergency list that was first announced in April. In July, the governor signed an Executive Order, which expanded the drought emergency list to include 50 of California’s 58 counties and called on all Californians to voluntarily reduce their water use by 15 percent compared to 2020 levels.

The issuance of a local emergency proclamation will allow Yolo County to set rules, regulations and other mandates as deemed necessary to reduce water usage during this emergency to protect the safety of persons and property within the unincorporated areas of Yolo County.

In conditions of exceptional drought, it is more important than ever for residents to do their part to help conserve water in what is a collective effort to protect a vital and increasingly scarce resource. Simple actions, such as taking shorter showers, turning water off when brushing teeth, only washing full loads of clothes and dishes, and replacing lawns with native water-wise plants can save hundreds of gallons of water every day per household.

The Mercury News identified a number of systems in trouble including: Northern California towns like Ukiah, Lakeport, Bolinas, Healdsburg, Cloverdale and Fort Bragg.

“This is going to be a long, hot dry summer,” said Dan Newton, assistant deputy director of the board’s Division of Drinking Water. “Throw fires in on top of that with stressed water systems, and it is going to be really difficult for some systems to survive.”

“It’s extremely serious,” said Fort Bragg Mayor Bernie Norvell. “I’ve lived here all my life, 51 years, and I haven’t seen anything like this.”

So serious that the town voted last month to buy an emergency desalination system to keep the town of 7,500 people from running out of water.

The problem right now is the main water supply, the Noyo River, normally flowing from the redwood forests to the ocean, is just two inches deep in some places, “the lowest flows recorded since measurements began in the 1950s.”  Worse yet, “When tides come in, salt water is pushed up river near intake pipes, putting the city’s water supply at risk.”

They hope to have the equipment up and running to purify salt water by October.

“We’re hoping we can limp along until this thing gets here,” Norvell said.

What happens statewide if California suffers another low rainfall season like the last?