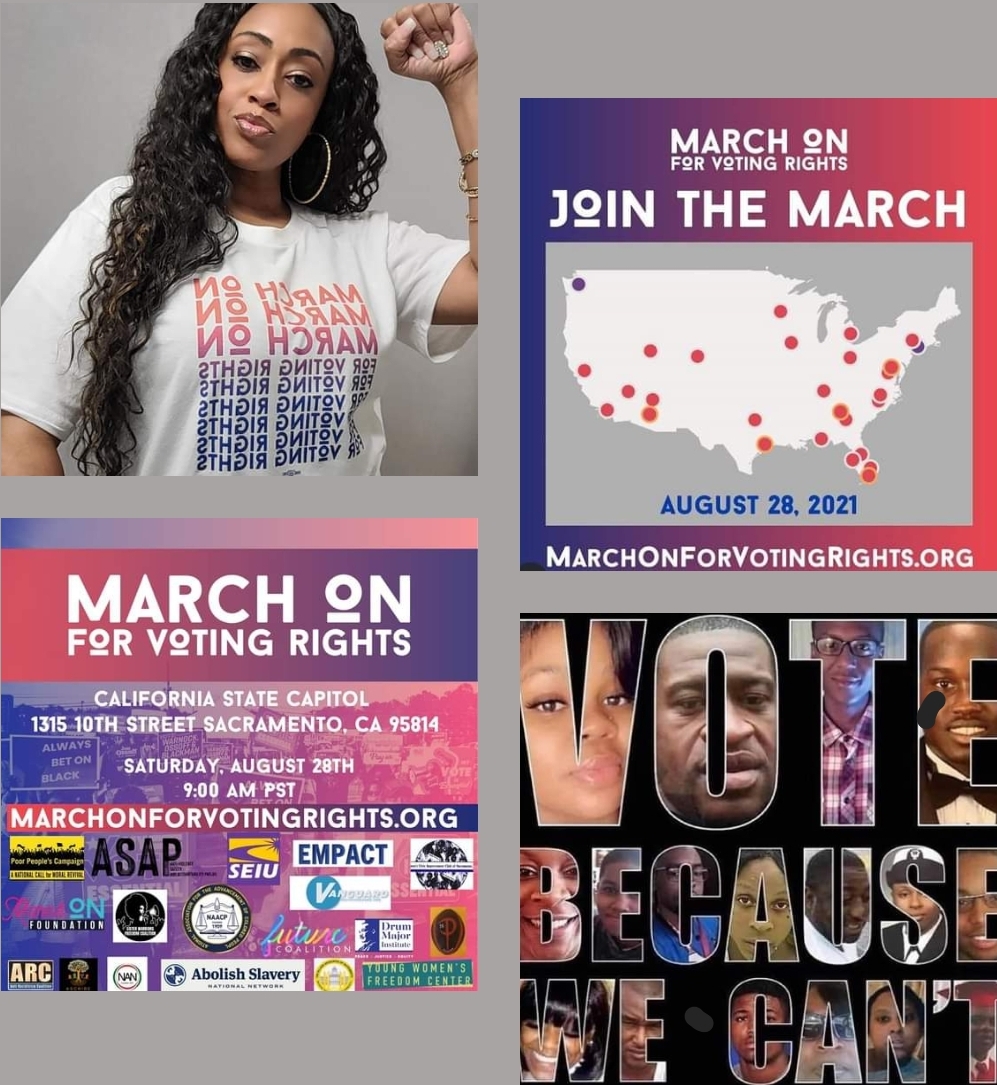 On August 28, Americans Will March Across the United States including in Sacramento to Demand an End to Voter Disenfranchisement Laws Sweeping the Nation

SACRAMENTO—On Saturday, August 28, Americans who believe in the power of democracy and free elections will embark on a historic “March On for Voting Rights” to demand that legislatures across the country end their push for restrictive voting laws and that Congress pass the For the People Act and the John Lewis Voting Rights Restoration Act, which will ensure free, fair access to the ballot for every American voter. Marches are being held nationwide.

The California March On for Voting Rights will be hosted in Sacramento. Marchers will go from Crocker Park to the steps of the California State Capitol, where speakers and musical artists will perform. The event will begin at 9:00 am Pacific Time on Saturday, August 28th, as marches across the nation commence.

In light of the COVID-19 pandemic, the California March strongly encourages physical distancing in accordance with CDC guidelines, masking both indoors and outdoors, and vaccination for all those who are eligible. The national March On for Voting Rights COVID Policy may be read here: marchonforvotingrights.org/covid/.

March On for Voting Rights is a mass mobilization that will take place on the 58th anniversary of Dr. King’s peaceful and historic March On Washington—this time, to demand that King’s “I Have a Dream” vision be deferred no longer. Since January, 48 states have introduced 389 bills that would restrict voting access, largely in response to record turnout in the 2020 election. The most brazen of these bills—some already passed into law—would suppress high-turnout voting methods by banning ballot drop boxes and mail-in voting, slashing early voting days and hours, restricting who can get a mail-in ballot, making illegal the distribution of food or water to those in long lines, and criminally charging officials who promote the use of mail-in ballots even when voters qualify. Some states are also putting election boards under partisan control, making it easy for legislatures to replace elected officials with members of their own party and granting them unprecedented powers that open the door to corruption in election administration.

Jamilia Land, Executive Board Member of March On, and the group of California organizers she’s partnered with are especially focused on the current recall efforts of California Governor Gavin Newsome, as well as increasing and exercising voting rights for formerly incarcerated people. “In November 2020, Prop 17 was approved, which restored voting rights to people on parole upon leaving prison. This enfranchised nearly 50,000 people on parole to become registered voters. This is key in our current legislative pursuits around the country to not only stop voter suppression and empower the people most directly impacted, but to send a message to the powers that be who want to kill the fundamental right of voting for the American people that we, collectively, will not stand by and watch our rights be stolen.”

March On for Voting Rights is dedicated to registering as many eligible voters as possible, including people on parole. Voter registration stations will be available at the event at the State Capitol.

To RSVP to the California March On for Voting Rights, visit www.tinyurl.com/californiamarch.