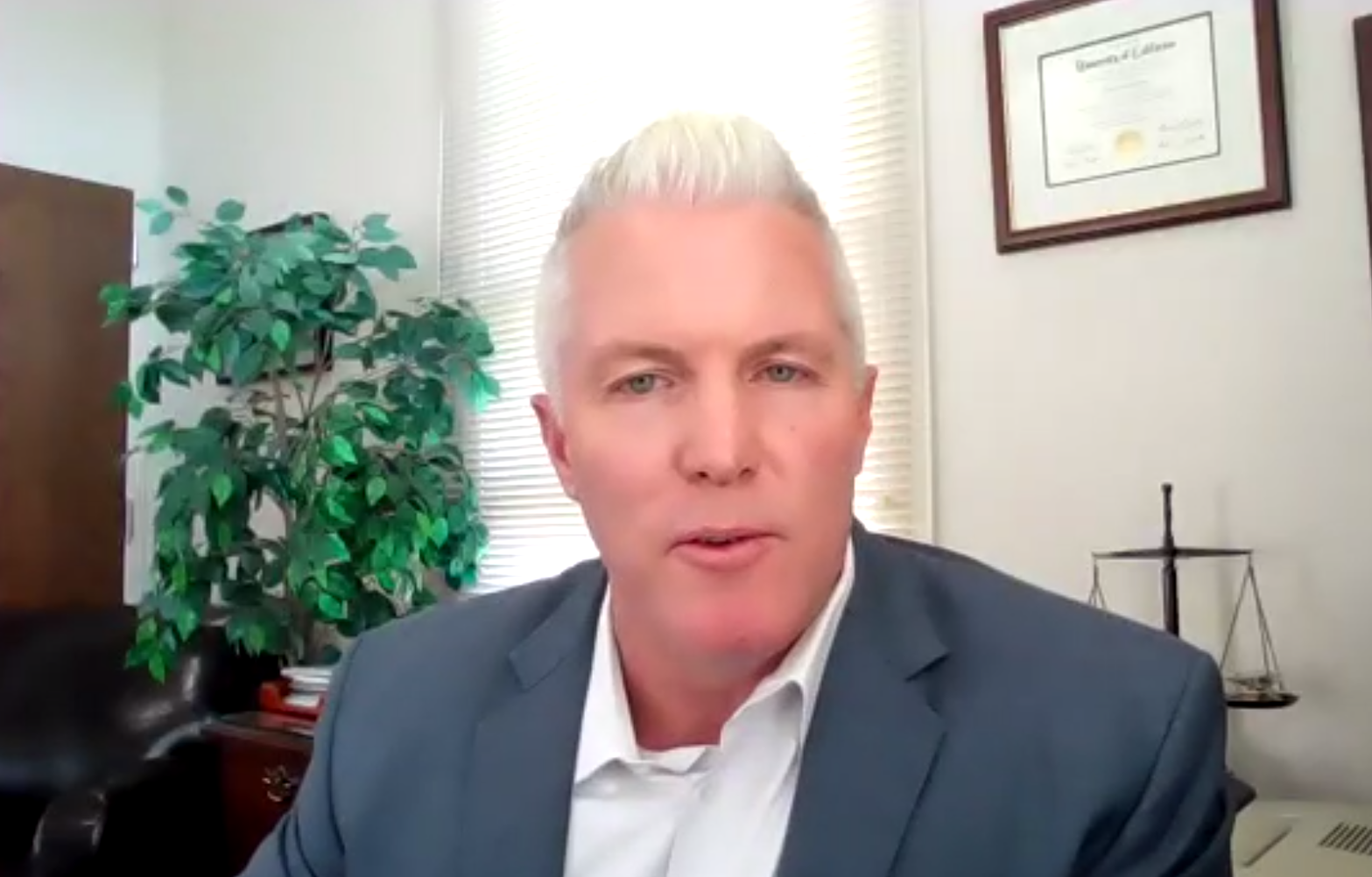 Woodland, CA – I watched Yolo County DA Jeff Reisig give a presentation at his monthly townhall on his new Data Transparency Portal.

As he explained, “Several years ago because of my passion for data and criminal justice transparency I wanted to have a portal where anybody could go to look at any piece of data out of the DA’s office.”

The DA’s office approached the non-profit Measures for Justice, a non-profit out of Rochester, to help them create a transparency portal.  This seems to be a trend across the country—Yolo’s is frankly more detailed and better than most of the ones I have seen.

On the other hand, as I will unpack here, the DA’s office suffers from the lack of a real data analyst—some of this data needs to be analyzed more fully, some of it is poorly defined, and there are some contradictory claims that the DA is making with regard to findings, findings that the data is really insufficient to support.

On Tuesday he made the point: “I’m a big believer that frankly prison is not a place where people go to get, well, certain people have to go to prison, no doubt, but a lot of people shouldn’t go to prison because we have

The data shows a decline in drug prosecutions but a rise in property and violent crimes, the DA claims.

“In 2014, the voters California passed Proposition 47,” he said.  “The big thing it did was it decreased the penalty for the personal possession of heroin, cocaine, methamphetamine, and those types of drugs from a felony to a misdemeanor. And that had a pretty profound effect on how those crimes were then investigated and enforced. And so when you see the drug offense line steadily decreasing… that’s what it is. Prop. 47 was passed and we see a marked decrease in the number of drug cases that the police agencies were sending to the DA.”

With respect to the increase in property crime and violent crimes which he said have crept up since 2017, he explained that voters in California passed Prop. 57 “which allowed for the early release of felons from prison for certain offenses.”

As a result he said, “We have seen an increase in the recidivism rate among many of those people who’ve been released.”

Reisig continued, “I’m not surprised that you started to see an uptick in violent crime and property crime. Since that initiative was enacted.”

He noted a study that found in California “that seven in 10 prisoners were rearrested within five years of release. That’s a 71% recidivism rate during that period of time. And I just find that to be a staggering recidivism rate and just more evidence that, you know, prison is a failure to rehabilitate people.”

“When I look at this, I’m seeing those initiatives on seeing failed policies. I’m seeing that we have a lot of work to do,” he said.

But he also said that he saw opportunity and local reform that he says is occurring in Yolo County. 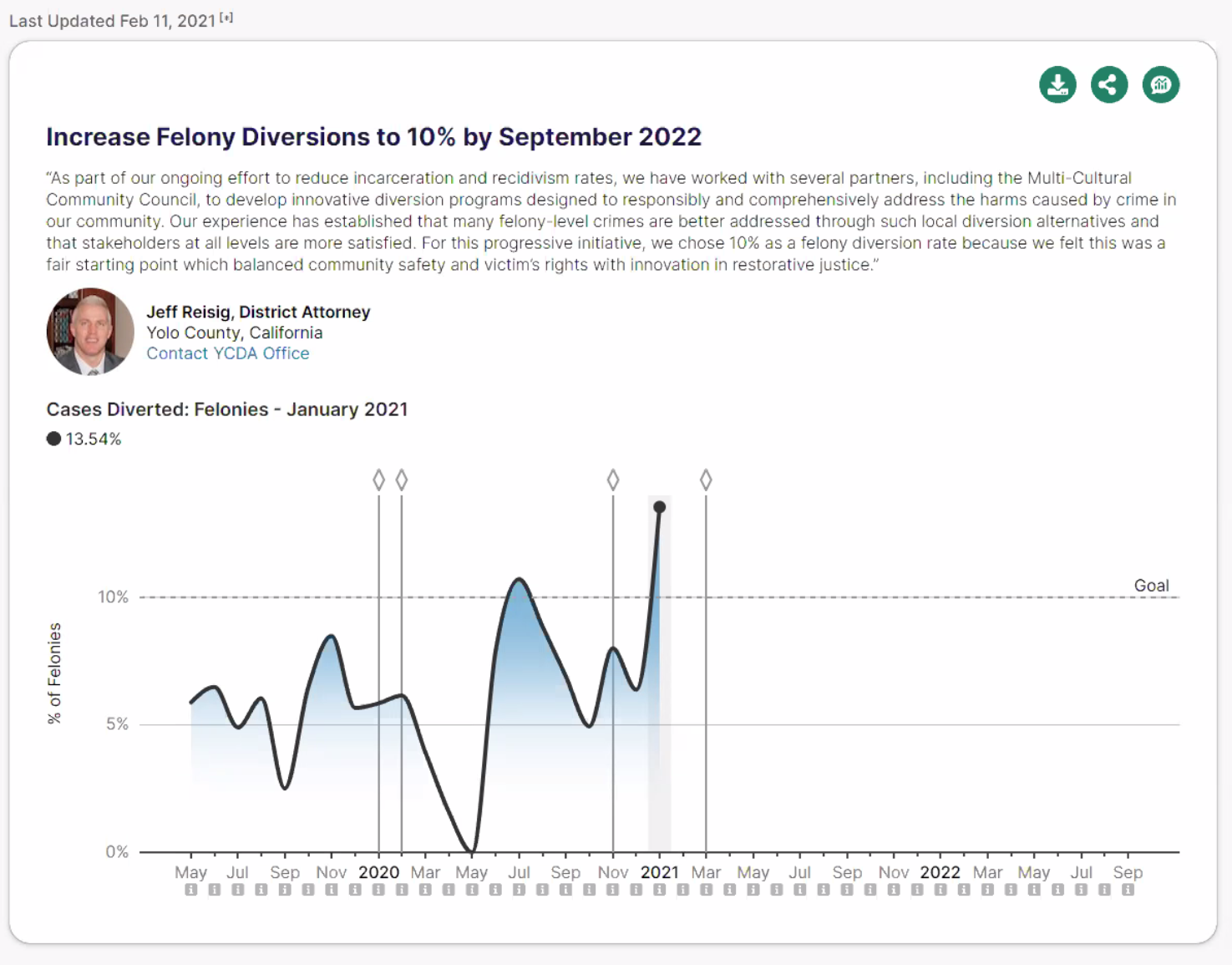 “One hundred percent this is criminal justice reform at the local level,” he said.  “You’ve heard me say many times that while certain people need to go to prison, a lot of people don’t and they shouldn’t because prison makes people worse.”

He argued, “The data on just those two programs alone, the mental health diversion that we run here in Yolo county and the addiction intervention program blow the state prisons out of the water, our success rate is really high on those.”

Reisig added, “Instead of sending people to prison or jail, we’re sending them to these diversion programs. And the data shows that the recidivism rate is much lower and people going to prison at least 37% lower than anybody that goes to the prison.” 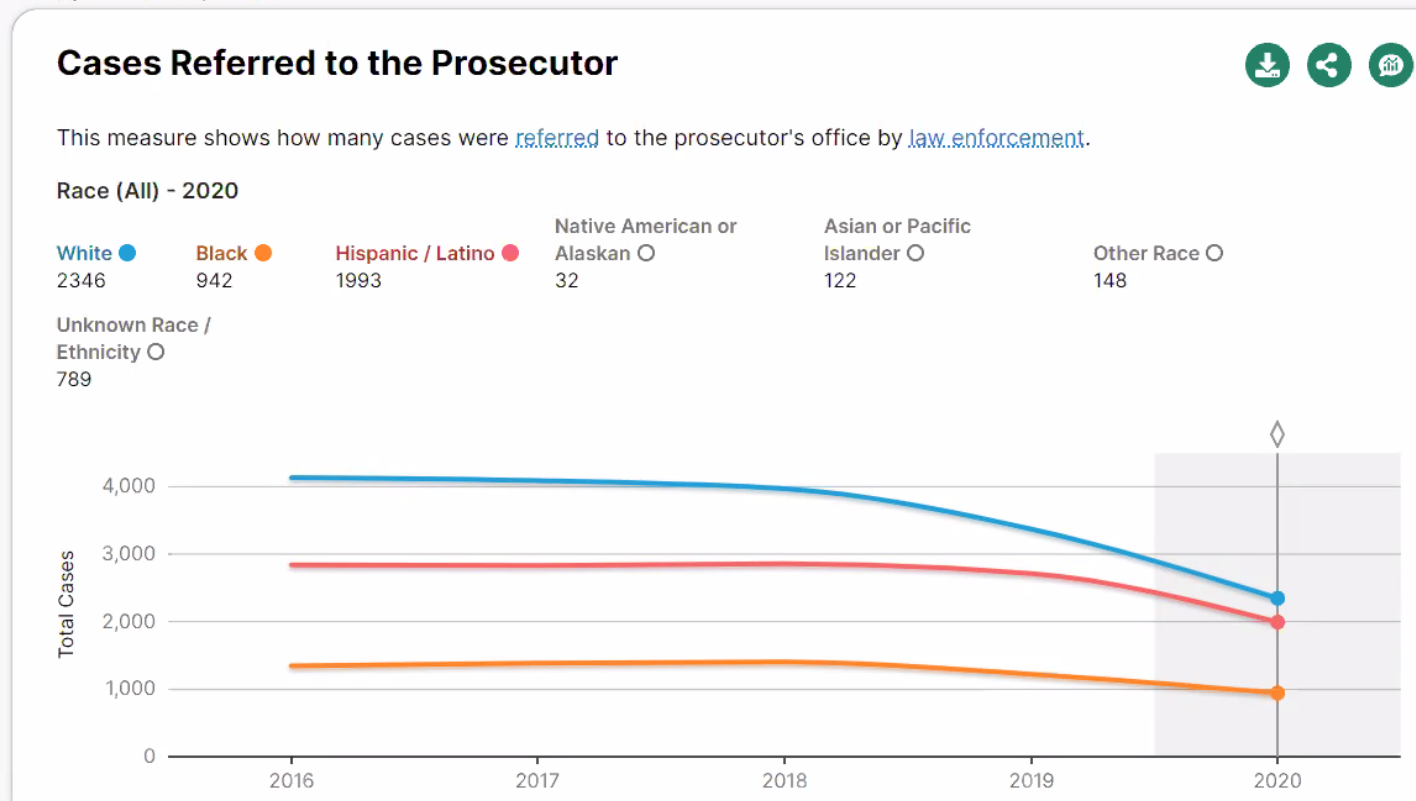 The slide refers to the cases referred to the prosecutor over time since 2016—the number of cases has dropped over that time, but much faster for whites than for Blacks or Latinos.

The question is what is driving this trend.

DA Jeff Reisig acknowledged, “This is the hard stuff that we all need to talk about.”  He said that “this has been the conversation of our country for, you know, well more than just the last year, certainly in the last year.”

He said this is very serious and also said it’s very “complex.”

Reisig said, “We need to look at beyond just are the cops doing something wrong? Is that possible? Sure. Do we need to look at that? Yes. Do we need to make sure that there is not overt or implicit discrimination or bias at every single level of the criminal justice system? Yes. We need to root it out, get rid of it, but there’s also deeper things going on.”

But at the same time, he shifted the blame away from policing.

“We have to just acknowledge that there’s things that are happening at home, at school. Um, not enough church, I don’t know, but we need to start talking about this stuff as a community because what this data shows us clearly is that there is a disproportionality or disparity of blacks in being referred to the DA’s office,” he said.

Blacks represent 2.4 percent of the population in Yolo County and “that number [being referred] is way higher than that.”

He said, “I don’t have the answers.”  He continued, “But acknowledging that this fact, this is real data and it’s problem, or at least it’s a disparity that we can’t ignore is where we have to start.”

His solution has been the racially blind process—a process that might help if the problem that is driving this is overt bias or unconscious bias, but probably not if there are embedded systemic factors here. 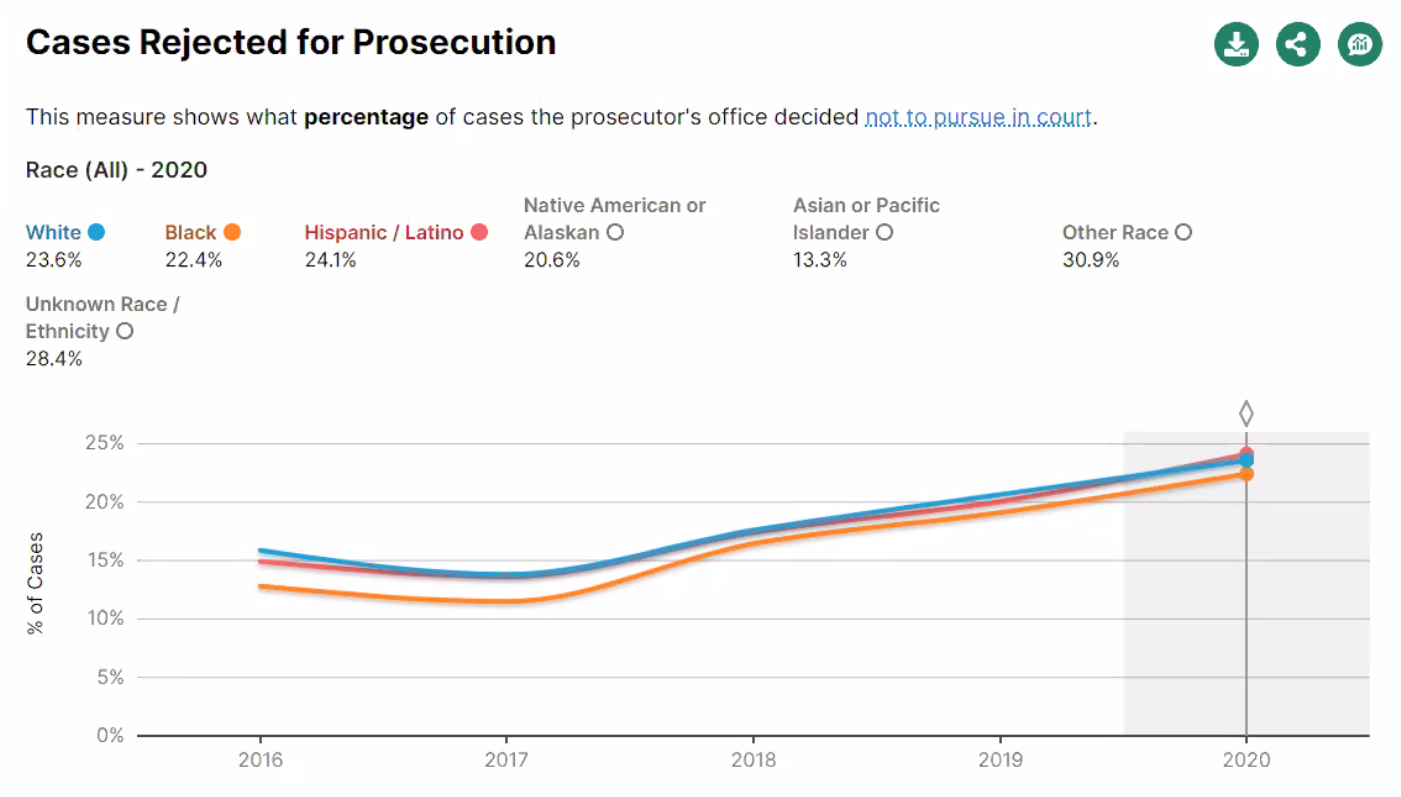 The rejection rate does really show a huge amount of bias.  The trend lines are running together.

These are not declination rates, however.  These are based on an assessment of the ability to charge the case.

A lot of this data raise more questions than answers—in part because, again, there is no data analyst or graduate student able to analyze the data, do things like multiple regressions rather than bivariate graphs, and do a deeper dive.

I find it odd that he considers diversion an answer but Prop. 47 and Prop. 57 a problem.  At the end of the day, you can divert people from misdemeanors just as much as you can from felonies.

The question I would have is what cases is he diverting if he’s opposed to Prop. 47.  Overall he is only diverting a very small percentage of cases to begin with.

I don’t think we have good enough data to support the supposition that Prop. 47 and Prop. 57 are driving changes in crime rates—particularly given the lack of rigorous analysis and the nationwide trends we are seeing in areas where there is no Prop. 47 or Prop. 57.

A second problem is what the decline-to-file category means and whether that is actually meaningful.  It may not be.  If it is strictly based on ability to prove the case (which actually I would argue is a step forward) then we should not be surprised that there is probably no statistically significant difference along the lines of race.

But it is perhaps not that helpful if all he is doing is judging whether he can prove a case rather than a declination where he would be creating policies where certain classes of cases do not get filed.

And there is now data that we have previously presented that show the value of not filing misdemeanors over even diversion.

One thought on “Analysis: Data Transparency Is a Good Start, but DA Reisig Needs a Data Analyst”