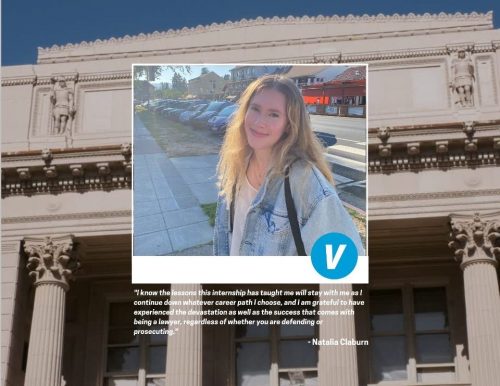 Despite a slow Wednesday shift this week, the case I wrote about Thursday of this week was action packed and very captivating, and it helped me reflect on what I have experienced in my time with The Vanguard.

Throughout my shift on Wednesday in Sacramento County Superior Court, Depts. 14 and 63, I saw hearings that mainly consisted of continuances and plea/set hearings that did not provide sufficient information to write about.

During my time with The Vanguard, what has continued to strike me about public defense attorneys asking for a continuance is that they always seem to be very anxious because of the amount of work they have been assigned.

Defense attorneys refer to these situations as “an overload,” and it is disheartening to see how the people who are assigned to people who cannot afford legal counsel are often unable to spend the amount of time they want so they can build a strong case for their clients.

Ending my Wednesday shift, I had no cases to write about and with no alternative assignments available, my day ended early. However, I did not anticipate the cases I would hear the following morning.

On Thursday, Aug. 19 in Sacramento Dept. 29, I heard two very complex preliminary hearings involving a felon’s unlawful possession of ammunition, assault with a firearm from a previously convicted felon, and a felon resisting three deputies while in jail for multiple other crimes.

The first case I encountered was about Tiffany Andrade, who was pulled over during a traffic stop with two friends in the car. As a previously convicted felon, Andrade was subject to search and seizure in which officers found a handgun and firearm magazines located in the purse she was wearing.

A convicted felon being in possession of ammunition was already breaking the law but could be charged as a misdemeanor due to the defendant having only one previous strike. But having a firearm alongside multiple firearm magazines filled with 17 and 32 rounds of ammunition complicated things.

No pleas were entered as the defendant and her counsel made the decision to go to trial in early November of this year.

The second case which I chose to write an article on was even more shocking. Dewaze Whitfield was driving recklessly around an apartment complex parking lot when he cut off a woman driving in her car.

She yelled out her window, “Dude, really?” to which Whitfield did not respond well. Whitfield then exited his car and started a verbal fight that quickly escalated to physical assault on the victim.

The defendant pulled out his firearm and pointed it at her, screaming “I don’t give a fuck about your life!” His fiancée, who was in the front passenger seat, did nothing to intervene.

Whitfield eventually got back in his car and drove away only to be pulled over 10 minutes later by authorities recognizing his license plate that the victim had given to the police.

He was arrested after the police searched him and his car, finding a firearm alongside firearm magazines in his fiancée’s purse.

As someone who is considering a career working in law, seeing that Whitfield’s fiancée did nothing as an innocent woman was being threatened with a gun left a knot in my stomach.

Nevertheless, having to face the reality of extremely sad allegations such as sexual assault, molestation, domestic violence, and more helped me to appreciate the opportunity that The Vanguard has offered me.

We see lots of hearings or trials on television shows or movies that show five-minute dramatic scenes with yelling, lots of people interrupting one another, and emotional outbursts.

But court in real life, as intense as it can be, is not that messy. It’s about preparation, focus, and the ability to stay calm in the midst of a disagreement that you feel very passionate about.

I know the lessons this internship has taught me will stay with me as I continue down whatever career path I choose, and I am grateful to have experienced the devastation as well as the success that comes with being a lawyer, regardless of whether you are defending or prosecuting.