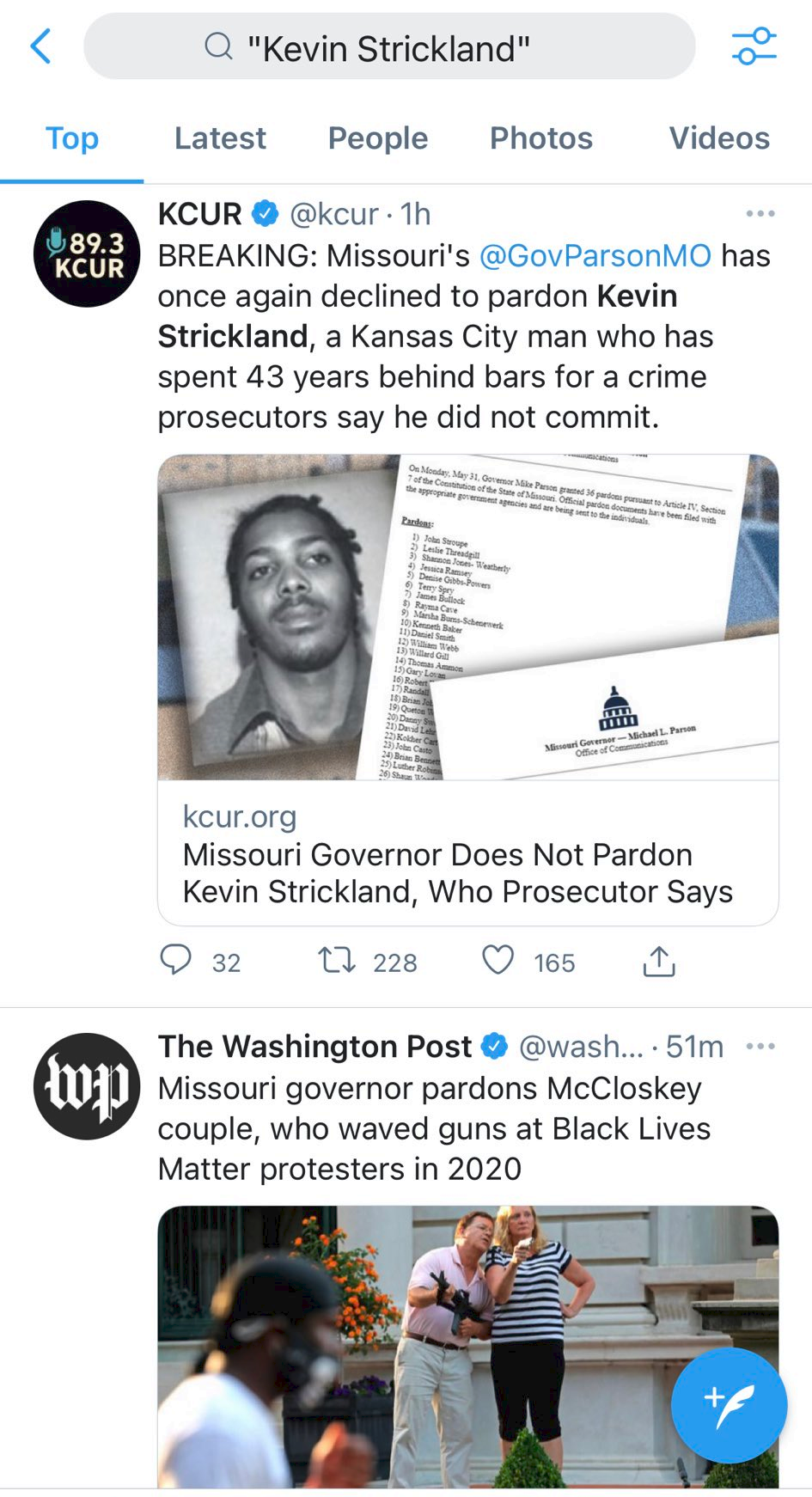 I saw this earlier in the week.  I actually clipped the image to use it later, but things got too busy and so by the time I got around to write it, the Washington Post already put out an editorial on it.

Here’s the thing.  This week, Missouri Governor Parson declined to pardon Kevin Strickland, a Kansas City man who has spent 43 years in prison for a crime that even the prosecutors in his own county prosecutor’s office say he didn’t commit.  (I interviewed Kenneth Nixon, himself wrongly convicted and release on the Strickland case this week).

In the meantime, the same day, Governor Parsons pardoned the McCloskey couple.

This juxtaposition is interesting.  This is not an isolated case.  Lamar Johnson was convicted out of St. Louis, Kim Gardner, the prosecutor has been attempting to get the conviction overturned, in fact, it appears everyone agrees that this is a wrongful conviction, but the supreme court ruled on a technicality against him and Parsons will not pardon him.

About this point our dutiful commenter Keith Olson will stop reading, will rush to the comment section and point out that the little old McCloskeys were just victims, they were only protecting their property from the evil Black Lives Matter  and were wrongly prosecuted by progressive prosecutor Kim Gardner.

Oh spare me.  The McCloskeys have been so persecuted that they have been able to speak before the Republican National Convention, they have misdemeanor charges and will not spend a day in custody.

This is about two innocent men who have spent 69 YEARS in PRISON for CRIMES THEY HAVE BEEN PROVEN INNOCENT OF.  In both cases, the actual killers have pleaded guilty.

Meanwhile Mark and Patricia McCloskey, were photographed brandishing firearms at peaceful protesters outside their St. Louis mansion last year.  They took misdemeanor pleas last month.  And they were ordered to pay fines.

Writes the Washington Post: “it is mind-boggling — and truly appalling — that the individuals Missouri Gov. Mike Parson (R) has found time to pardon are the unrepentant gun-toting McCloskeys and not two Black men who have suffered the grave injustice of being locked up, with no end in sight, for crimes they did not commit.”

If Ol’ Keith is still reading at this point, if he’s being honest, he will probably opine well, maybe the Governor should pardon all of them.

While I don’t agree that the McCloskeys deserve a pardon, that is certainly a more moral defensible position than the one the actual Missouri Governor has taken.

Writes the Post: “The U.S. Supreme Court has called clemency the “fail safe” of the judicial system, empowering executives to correct unjust outcomes — such as a wrongful conviction or a too-severe sentence — on a case-by-case basis.”

But Parson’s position is this not a priority.

He noted that Strickland was tried “by a jury of his peers” and found guilty. But he added that he knew there was “a lot more information out there.”

This issue is in fact about priorities.  Parson in a press conference this week, said he has a backlog of 3000 clemency requests.  Further, ABC News reports, “He issued almost no pardons before his reelection in 2020 but has since begun issuing a group of pardons monthly.

“When something like that comes up, we look at those cases, but I don’t know that that necessarily makes it a priority to jump in front of the line,” Parson said during a Monday news conference. “We understand some cases are going to draw more attention through the media than others, but we’re just going to look at those things.”

But wait a second – didn’t the politically connected McCloskeys do just that?

The facts in the Strickland case SCREAM for justice and justice was not served by the original prosecutor, by the jury, by the criminal legal system and now by the Governor of the State of Missouri himself.

As the Post points out: “Strickland had been found guilty by a jury of his peers. Never mind that prosecutors removed the only four Black people on the list of potential jurors, ensuring he faced an all-White panel overseen by a White judge with White lawyers.”

Never mind the Post adds, “evidence amassed by the Midwest Innocence Project persuaded the local prosecutor to take another look at the case. The local prosecutor’s findings, corroborated by independent review by federal prosecutors, determined that Mr. Strickland is innocent of the charges for which he was convicted.”

As the Post points out: “In most states, when defense lawyers and prosecutors agree that someone is innocent — as is the case with both Mr. Strickland and Mr. Johnson — they are freed, but Missouri law limits local prosecutors’ ability to correct wrongful convictions and gives an outsize role to the state attorney general.”

They have recourse though and that is the Governor.

But the Governor is not going to prioritize the release of a 62 year old man who has served 43 years in prison for a crime that he did not commit.  He will do it however for a well off couple who served nary a day in custody.

And that is what we call unequal justice.