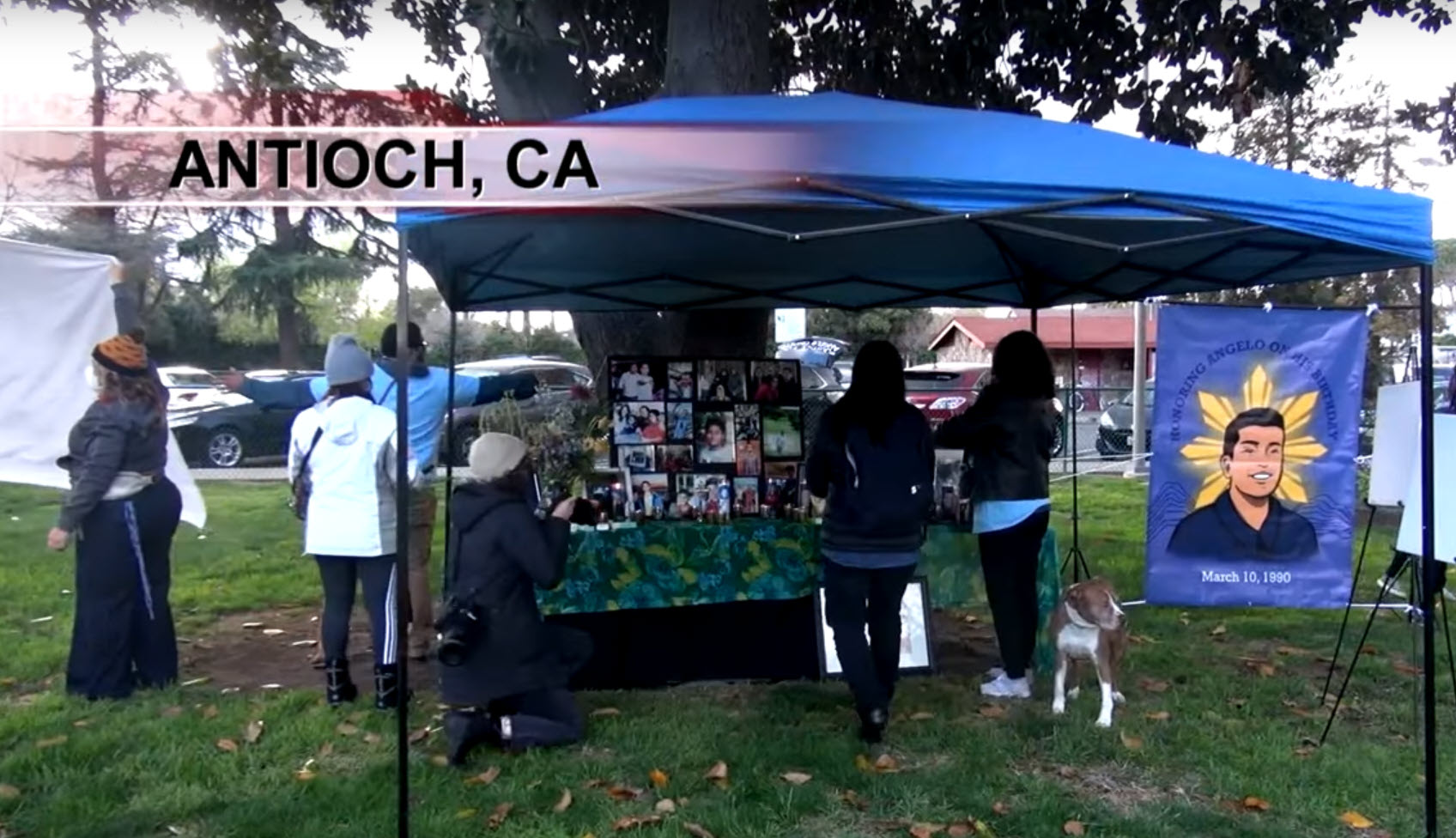 Antioch, CA – When I spoke on Friday afternoon with longtime civil rights attorney John Burris about the coroner’s inquest in the Angelo Quinto case, and he told me “accidental death” and “excited delirium” I spit out my coffee.

Hasn’t that been debunked? I calmly asked.

“We don’t believe in excited delirium,” Burris calmly responded.  “We had our own medical examiner who determined that there was a deprivation of oxygen to the brain caused by restraint asphyxiation that was caused by the officers being on his back and on his neck, his diaphragm pushed against the floor and his legs pulled up in like a boat position—compromising his airway.

“My point of view is they never really addressed the issues that we think are germane to the case,” Burris said.

I’ll say.  Why is it that everyone with a 200-pound officer pinning them down, who ends up dying what must be a horrifying and terrifying death, dies because they suddenly get so excited?

Ben Nisenbaum, an attorney who works with John Brurris, was a bit more animated.

“Generally speaking, it’s a bunch of nonsense,” he said.  “To me it’s right up there with spontaneous combustion.”

Nisenbaum said that it might be theoretically possible that you get “so excited that you die” but the reality is “people who die from excited delirium die with a police officer on top of them, which doesn’t make any sense.”

He said that there are cases where people in an agitated state do in fact die, but that’s usually accompanied by severe hyperthermia where they are running fevers over 105 degrees.

Nisenbaum said that when paramedics arrived at the scene, Quinto’s body temperature was normal.

He called them out: “It’s all a bunch of nonsense.  Most of the time the police know that he’s just died and you have a ‘Weekend at Bernie’s’ situation where they’re trying to act like the person’s still alive.”

When I was done with the calls, I got to work and did some research to confirm my thinking.

In a press release in June, the AMA said they oppose “’excited delirium’ as a medical diagnosis and warns against the use of certain pharmacological interventions solely for a law enforcement purpose without a legitimate medical reason.“

They believe that “current evidence does not support ‘excited delirium’ as an official diagnosis, and (the organization) opposes its use until a clear set of diagnostic criteria has been established.”

This spring when Derek Chauvin was on trial for murder in the death of George Floyd, the defense team blamed the death on… excited delirium.

As Radley Balko explained in April, “According to proponents of the idea, about 10 percent of people suffering from excited delirium simply drop dead, usually of heart failure, often while heavily restrained or after being shot with pepper spray or a stun gun.

“It’s a convenient diagnosis for law enforcement,” Balko points out.  “It provides both a justification for what otherwise might look like excessive force, and impunity when that force coincides with a suspect’s death. “

But he noted—even before the AMA release, that “excited delirium isn’t recognized by the World Health Organization, the American Medical Association or the American Psychiatric Association. Studies have found it disproportionately diagnosed in Black victims.”

And he adds that “one of its biggest proponents isn’t a medical organization, but Axon Enterprise, the company formerly known as Taser International, which for years has hosted conferences and published literature to sell the idea to medical examiners. The reason ought to be self-evident — it’s a liability-ducking explanation for why hundreds of people in the United States have died after getting shot with a weapon that isn’t supposed to be lethal.”

A 2015 Slate article noted, “Police often blame suspects’ deaths on ‘excited delirium.’ Is that a diagnosis or a cover-up?”

They also point out the lack of medical agreement.

Instead, in 2014, the International Association of Chiefs of Police issued a white paper that tried to bridge the gap, concluding, “Despite what it is called or whether it has been formally recognized, it is a real clinical concern for both law enforcement and the medical communities.”

Slate points out: “Emergency room doctors and medical examiners insist that members of the larger mental health community don’t acknowledge the condition because they never see it.”

Slate does give police an olive branch: “Doctors in hospitals have successfully tranquilized people with symptoms of excited delirium, and the patients have survived. But when cops—armed with nightsticks and Tasers—try to subdue someone with excited delirium by force, the person may die. This doesn’t mean cops are causing the deaths, but merely that they are not in a position to avoid them.”

Color me skeptical.  And this misses the real point: would Angelo Quinto have died from this if a 200-pound cop hadn’t been on his back, knee on his neck, bending his legs up and backwards toward his back for six to eight minutes?

And what about the fact that paramedics were the first ones to notice that he had died?

Just like in George Floyd, Burris alleges that “they never checked to see the responses that might have saved this guy’s life.

The paramedics’ report is crucial to understanding this situation, Nisenbaum points out.  The paramedics arrive, find him both unresponsive and not breathing. “They say that he’s been that way for an unknown period of time.  That means it doesn’t just stop.  It didn’t just happen.  They were restraining the guy who was dying and did die underneath them and they want to call that excited delirium.”

He previously pointed out from the paramedics’ report that they had Quinto in a prone restraint for over six minutes and likely closer to eight.  And “they want to call that excited delirium.”

Nisenbaum goes on to state: “The length of the prone restraint is shocking, but even more so is what the officers involved, the chief and the Antioch Police Department have done since then to mislead the media and the public.”

When I see excited delirium as an explanation—when all this happens—it definitely looks less like science and more like the law enforcement quest for the Holy Grail.

Way back in 2009, Mother Jones pointed out the extent to which ER doctors and medical examiners get their information about excited delirium from Taser International—which makes this look like an ad hoc explanation by Taser to protect themselves from liability when someone hit with their product dies.

Amnesty International, back in 2005, compiled data on 334 fatalities following the use of Tasers between 2001 and 2005, and of those, in 69 of these cases autopsy reports specifically cited excited delirium as the cause of death.

“Of all in-custody deaths [not involving firearms], excited delirium syndrome is the most common form,” notes Vincent Di Maio, a Taser expert witness, retired Texas medical examiner, and coauthor of the 2005 book Excited Delirium Syndrome: Cause of Death and Prevention.

On the other hand, even back then, the medical establishment was skeptical.

“We have no idea what any of the causes are, what the biology behind it might be, what underlies it, how being in this state leads to death with supposedly some intervention with a Taser or other force,” says Matthew Stanbrook, a faculty member at the University of Toronto Medical School.

As retired forensic pathologist Di Maio explains in his book on the subject, excited delirium is only determined after an autopsy “fails to reveal evidence of sufficient trauma or natural disease to explain the death.” You work backward to the diagnosis.

In fact, I would argue again that this was an explanation concocted by Taser to indemnify them from wrongful death suits, and it works the same way for cops.

So why are we still using it today?  I’m sorry, but given what we have seen with George Floyd, we have other and better explanations for the death of Angelo Quinto—particularly given the actions and inactions of the cops here.

Fortunately, the sheriff and coroner do not get the final say here.  Contra Costa County happens to have a progressive DA, Diana Becton, and we also have the AG, Rob Bonta, with the authority to take over these investigations as well.

It is time for both to step up—because this one smells.