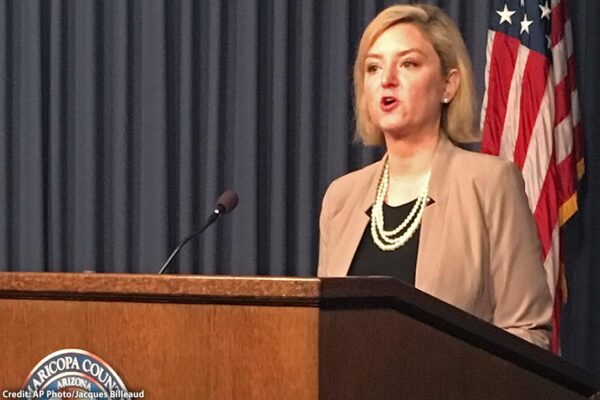 Who is more audacious than a prosecutor who jails people for substance use while suffering from a substance addiction herself?

An elected prosecutor who goes out-of-state for weeks or months for in-patient addiction treatment on the taxpayer dime, while refusing to resign her seat.

Meet Allister Adel, the top prosecutor of Maricopa County, Arizona, who released a media statement wherein she explains that she “sought in-patient services at an in-state facility on Sunday, Aug. 29.” She also noted in the statement that, a week later, she “moved to a different location with the same behavioral health organization.” She is currently undergoing treatment in California, despite still actively serving as the Maricopa County Attorney—the DA for the third most populous county in America.

Drug addiction stigma is awful, but it impacts different people differently. The downtrodden man stocking shelves at the grocery store late at night who has been in rehab several times will get fired if caught drinking on the job, no questions asked. But many people feel for a suffering prosecutor, someone whose work is about locking purported “bad guys” up. Top prosecutors like Adel can then take advantage of burgeoning anti-stigma narratives to get away with not doing the job for long stretches of time, despite having a crucial job as the chief law enforcement officer of a major metro area.

This is not the first time this has happened. Shockingly, when Hennepin County (Minnesota) Attorney Mike Freeman of Minneapolis entered in-patient alcohol treatment for five months in 2019, he somehow managed to keep hold of the DA seat the whole time. He was presumably getting paid his taxpayer-funded salary the whole time.

This does not have to be the way, as Dallas realized when former District Attorney Susan Hawk spent chunks of her year and a half in office in in-patient mental health treatment. She was not doing her job. She was suicidal and repeatedly misusing drugs to the point of not being in control of her life. Despite her most ardent supporters arguing that no one would ask her to resign if she had cancer, calls for her resignation mounted until she left office in September 2016.

As an aside for those who think these issues are not about public safety but opportunistic politics, Texans understood that Governor Greg Abbott would appoint a fellow Republican after Hawk’s departure. And the Governor did — former judge Faith Johnson, who got in trouble for throwing parties in her courtroom while sentencing people to die in prison, took Hawk’s spot. Johnson, who was defeated in her re-election bid by reformer John Creuzot in 2018, was terrible for advocates of a more humane legal system, but at least she did her job.

A better alternative to blind empathy for hurting DAs is drug and alcohol realism. If someone is using a drug, whether alcohol, cocaine, or heroin (and whether it’s on or off the job), and it is not disrupting that person’s ability to fully and ethically discharge the duties of his or her job, leave that person be. But if that person cannot conform to the expectations of the job, then he or she should be replaced. In Adel’s case, she should resign or be forced to resign.

This is not to suggest that Adel should be barred from public office or running for the same seat in the future. If she resigned, only to run again in the future, it would be unjust for voters to judge her since she did the right thing by not wasting taxpayer money or jeopardizing her constituents’ safety. But, like in any other job, taking weeks or months off out of nowhere after floundering due to a personal crisis is simply unacceptable. If she can’t take the heat, it’s time to get out of the crime-frying kitchen.

23 thoughts on “Commentary: Maricopa DA Refuses Calls to Resign Despite Being in Substance Abuse Treatment”