For most of his career, Jeff Rosen has attempted to pass himself off as a reformer.  Maybe not in the light of George Gascón and Chesa Boudin, but his office partnered with the Northern California Innocence Project on creating a Conviction Integrity Unit, at a time when many of those units were window dressing.

But we also saw a different side of Rosen last year when he went off on then-public defender Sajid Khan.

Khan is now his opponent for DA.

We see that side emerging again.

In a campaign letter, he writes: “I have worked hard to make our criminal justice system more humane and rehabilitative while strengthening public safety and providing justice, compassion, and concrete services to crime victims.”  He continues: “I am asking voters for four more years to continue proving that my progressive, balanced and measured approach to criminal justice reform is the right strategy for deep and long-lasting change.”

He later continues this kind of middle ground approach to reform, saying “it’s clear that a measured and balanced approach is the most effective way to promote justice, equity, and public safety.”

But then the kicker is “the extremists are not interested in supporting any reforms that prove their highly partisan views wrong.”

In another email, he writes: “For the first time since I was elected, I may have an opponent from the political extreme.”

The word extremist is interesting particularly in light of Sajid Khan’s Muslim heritage.

Remember last year’s battle.  It was a blog post published June 3 about the George Floyd protests.

“When police officers act flagrantly in violation of the constitution and our laws,” Khan wrote, “when they illegally stop and frisk a black man walking on our city streets, when they racially profile and pull a car over driven by a black man without reasonable suspicion, when they beat, choke, punch, baton, tase, unleash dogs upon, shoot at and/or kill black men who pose no imminent threat—it is the DA’s office that is responsible for prosecuting those police crimes or at the very least not endorsing that callous and illegal behavior by using the fruits of those unlawful police intrusions as part of their prosecutions.”

Rosen saw this as a threat.  He filed a “whistleblower” complaint, demanding that the county investigate Khan because of his writing.

He wrote that his staff took “burn it down” language in the post literally and that “many feared they would be trapped in the building, unable to go home.”

But the message here is clear—Rosen is using heated language to describe his opponent and implant in the mind of voters a sort of danger.  Not just the danger that perhaps Todd Spitzer sees in Pete Hardin in Orange County, but the danger of extremism and the threat perhaps of more than just dangerous ideas.

Mountain View Mayor Ellen Kamei has endorsed Sajid Khan for Santa Clara County District Attorney in 2022. Mayor Kamei was elected to the Mountain View City Council in 2018 and was chosen by her colleagues on the city council to serve as mayor in 2021.

Mayor Kamei, born and raised in Silicon Valley, has been a leader on addressing housing and homelessness, working to increase available housing and provide protections for vulnerable residents. She has also been an advocate for racial equity and justice on the city council.

“We need a leader dedicated to tackling the root causes of crime in order to build safer communities. That leader is Sajid Khan,” said Mountain View Mayor Ellen Kamei. “Sajid’s commitment to restorative and racial justice is what we need in the Santa Clara County District Attorney’s Office. I’m proud to endorse Sajid for Santa Clara County District Attorney and look forward to working with him as our next DA.”

“Mayor Kamei has been a tireless leader for her city and the communities she represents,” said Sajid Khan. “Mayor Kamei has served her community long before she was elected and is committed to tackling many of the toughest issues facing our communities, including homelessness and racial inequity. I am proud to have her support and look forward to working with her as the next Santa Clara County District Attorney.” 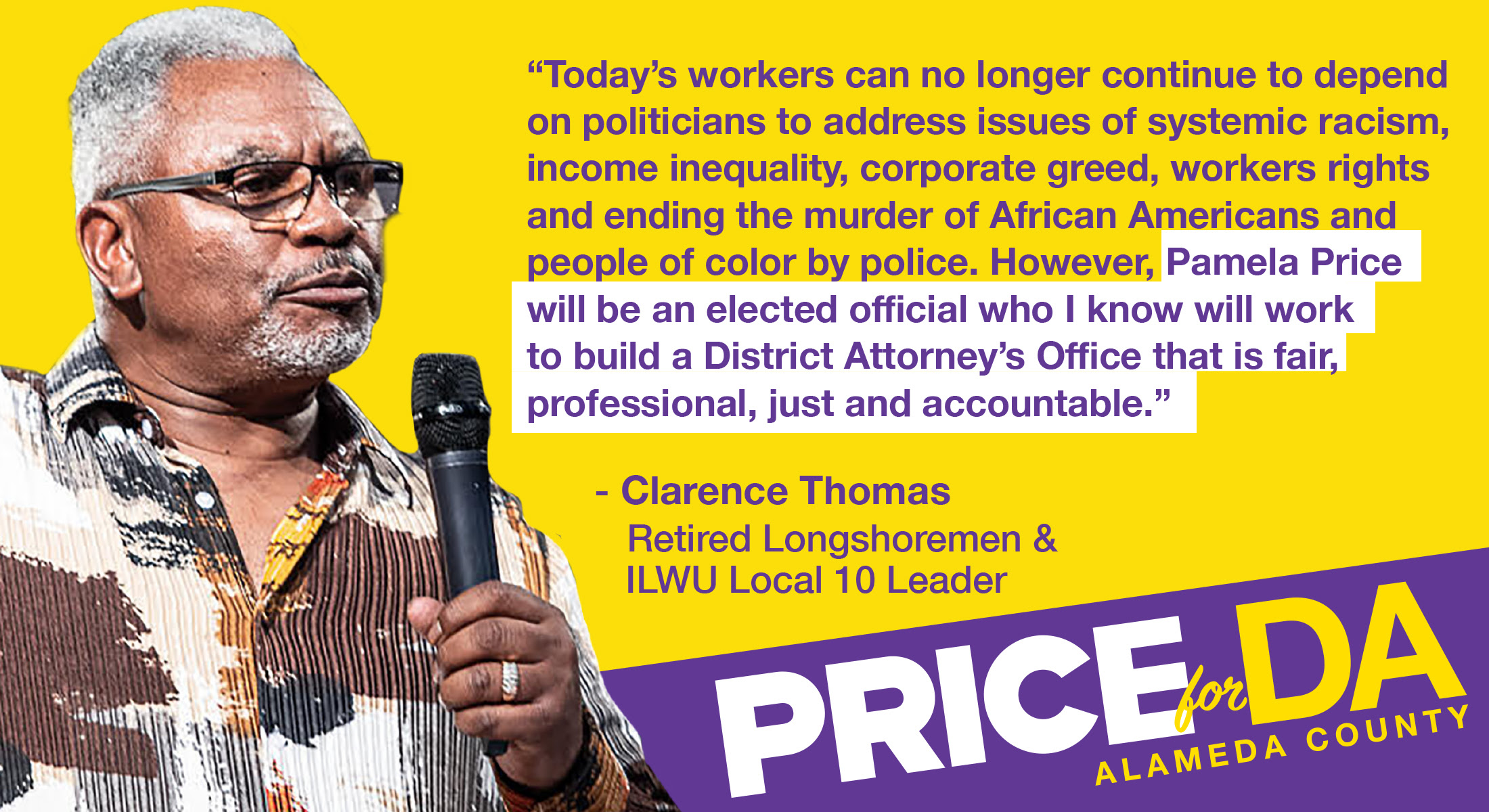 Clarence Thomas comes from a long line of longshore workers who were members of Local ILWU Local 10. Thomas recently edited and published his first book, Mobilizing in Our Own Name: Million Worker March—an anthology of the decades of ILWU-backed protests.

Another prominent labor leader who has endorsed the campaign is Patricia Ann Ford. Pat Ford made history in her 31 active years with SEIU, becoming the first African American and second woman to hold international office when she was elected Executive Vice President, a position she held for eight years. In the early 70s, as a 24-year-old clerical hospital worker, she helped lead a successful effort that created SEIU Local 616, representing Alameda County workers. She rose from the ranks of a rank & file activist, becoming the first African American to hold the top position of Executive Director of a local. 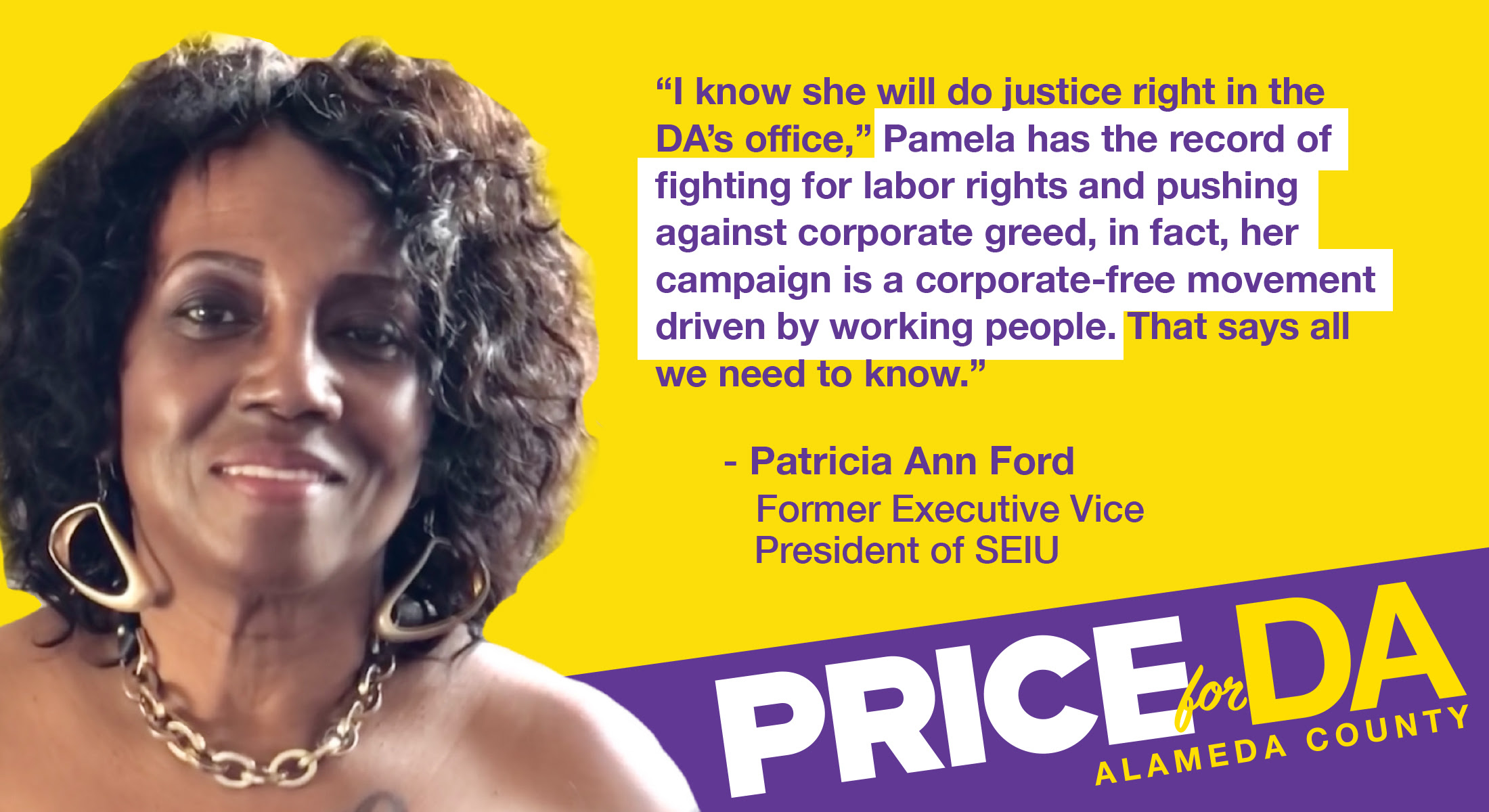 “We cannot improve the lives of our members at work if we ignore the problems they face at home, in their communities and abroad. Many of us have struggled against injustice and discrimination that was based on the color of our skin, or where we came from, or who we love and marry, or our legal status,” stated Ford previously.

“In addition to Clarence Thomas and Pat Ford, I am inspired and humbled to also have the endorsements of other union leaders like,” Price said…