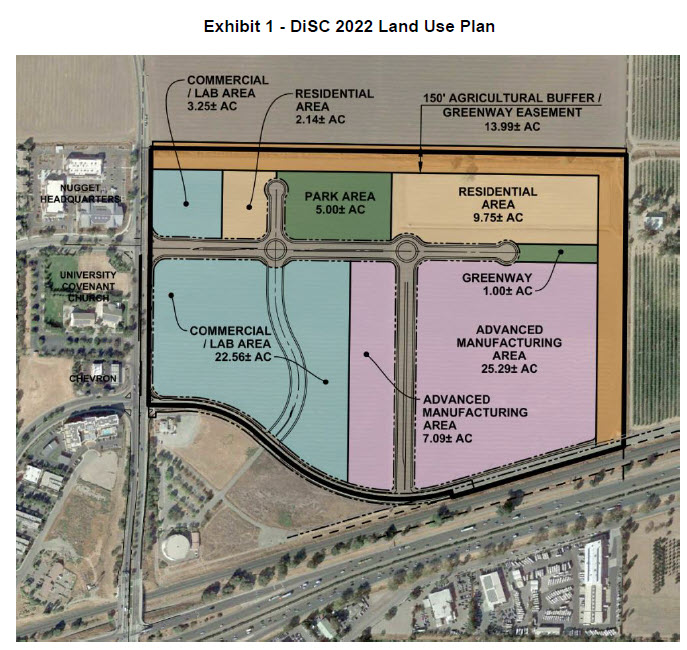 Davis, CA – Nine months after a narrow defeat at the polls last November, DISC (Davis Innovation Sustainability Campus) comes back to the council as staff looks for them to provide direction on processing the new application.

The original DISC project was submitted to the city in June 2019, went through a public outreach process which culminated in a council approval last July and defeat by the voters in November by a 52-48 margin.

Staff points out that the “most notable difference between the original DISC project and the DISC 2022 project is the reduction in size of the project. The project is roughly half the size it was in 2019.”

The revised proposal reduces DISC 2022 from 194 acres down to 102 and reduces the office, laboratory and advanced manufacturing space from 2.6 to 1.1 million square feet, and reduces the number of proposed housing units from 850 to 460.

Staff writes, “The applicants believe that the modified project will serve the economic development and innovation needs of UC Davis and the City for the next decade, will do

so in a manner that is responsive to community feedback, and reflects the realities of a post-COVID work environment.”

The goal would be that it would receive ballot consideration by June 2022—which would mean a tight timeline requiring council to take action on the project by February 15, 2022 ( just five months away).

Staff says, it “believes that returning to the commissions that reviewed the prior proposal for the purpose of confirming that their prior recommendations are still valid and to see if there are any modifications they feel should be made to address the scaled-down proposal would be helpful.”

Under the proposed timeline the project could go to commissions: Open Space, Rec and Parks, Tree and NRC (Natural Resources) in October.  It would then go to BTSSC (Bicycling, Transportation and Street Safety), Finance and Budget and Social Services in December.  That would mean a January Planning Commission hearing and a February council meeting.

The return of DISC 2022 was announced back in July.

“Because the demand is strong and growing for an innovation center close to the university, we’ve decided to try one more time to get a plan approved. We believe there’s an appetite in Davis for a smaller plan that is responsive to the community and the market,” said Dan Ramos, vice president of Ramco Enterprises and DISC 2022 project manager.

“The changes we’re making are in direct response to what we’ve heard from the community,” said Ramos. “We also now have insight into what post-COVID work environments will look like and our updated plan reflects those realities. What hasn’t changed is the need for research and advanced-manufacturing facilities to deal with global challenges like climate change and food security, especially so close to a leading research university like UC Davis.”

The original project was put on the ballot for a vote in November 2020 where it was defeated by 1300 votes.

Critics of the project complained about traffic impacts as well as the overall size last year.  In addition, many observers felt that the uncertainty created by the pandemic and the absence of students on campus were causes of the voter denial.

Critics have argued that the reduced size of this project simply means that the owners will return for a second vote at a later time.  Some have suggested using the Reynolds and Brown property on the north side as mitigation land.

In the meantime, there were generally positive comments from various stakeholders in Thursday’s release.

“As the voice of the Davis business community, we’re planning to play an active role in communicating broadly about the plan’s many benefits for the city,” said Cory Koehler, executive director of the Davis Chamber of Commerce.

According to Ramos, numerous tech firms have expressed interest in locating at the DISC. “We know there is strong demand within and outside of the region for the type of facilities we plan to develop. There will be no problem finding leading-edge tech tenants when the plan is approved,” Ramos said.

Local tech leaders also have indicated they are supportive of the DISC 2022’s implementation.

“There isn’t enough space in Davis to accommodate all of the innovation-focused businesses that would like to be here. We need DISC 2022 to retain more of the companies that are being formed through research done at UC Davis,” said Justin Siegel, a Davis-based entrepreneur and founder of five biotech companies.

The project could potentially go on the ballot for June 2022 vote.