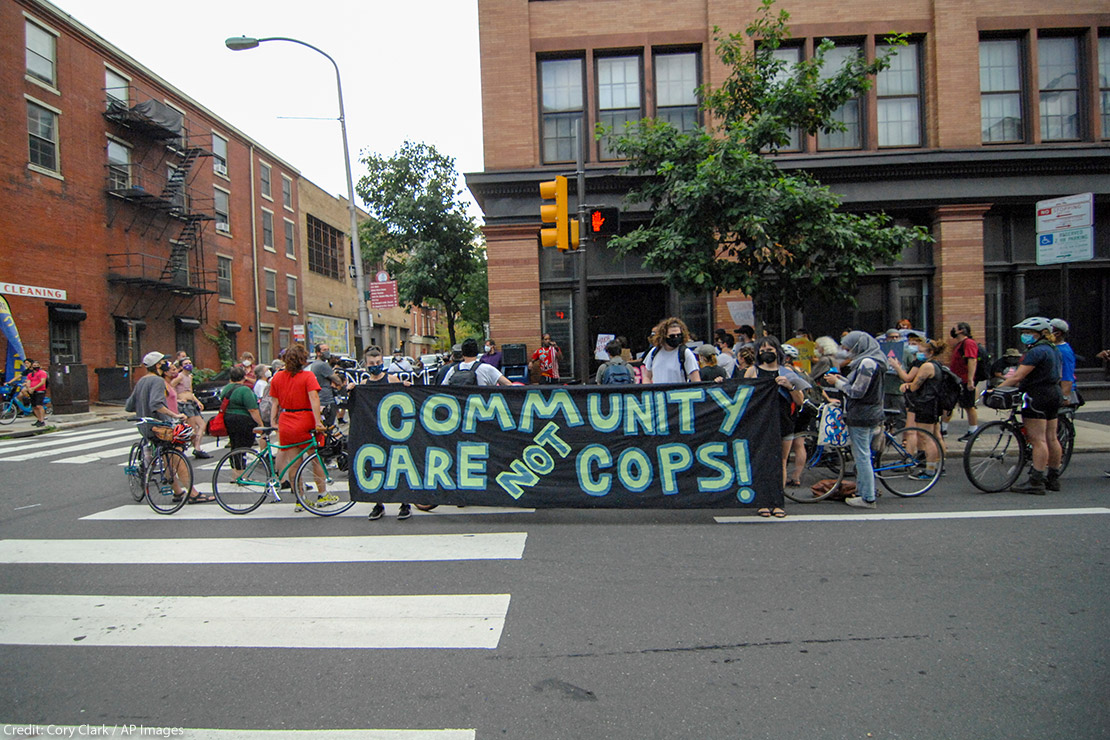 As communities grapple with violent crime, calls for more police have increased. Here’s why policing isn’t the solution to violence, and some viable alternatives.

By Paige Fernandez and Taylor Pendergrass

“With violent crime on the rise, we must invest in more police.” You’ve probably heard this recently from the media, elected officials, and some people directly impacted by gun violence. The pain of communities facing the threat of interpersonal gun violence demands that something be done to protect families, create safer streets, and save lives. If you combine that desperate need for solutions with a society where police have been legitimized as the first, last, and only resort, it’s easy to understand why people would clamor for more police right now.

While this may seem like a logical response, the facts show more policing is not the answer. Let’s explain why, and what alternatives communities can invest in to help effectively reduce violence.

The 10 points below unpack why prioritizing alternative responses to harm and violence is more effective and longer lasting than shoveling even more money into policing, and without the increase in racial injustice and harassment that comes with more officers. These points will also help you see right through cynics who cry “law and order!” for reasons

that have nothing to do with actually addressing violence or repairing communities.

1. There are many effective approaches to reducing violence that don’t involve police.

Investments in housing, health care, jobs programs, education, after school programs, gun control, environmental design, and violence interruption programs have all been proven to quantifiably reduce violence. For example, one study found that every additional community-focused nonprofit in a medium-sized city leads to a 12 percent reduction in homicide rate, a 10 percent reduction in violent crime, and a 7 percent reduction in property crime. In Philadelphia, simply cleaning vacant lots in neighborhoods below the poverty line resulted in a 29 percent decrease in gun assaults.

2. Policing is not especially effective at reducing violence.

Police typically deal with violence only after someone has already been killed, injured, or otherwise harmed. Even then, many police departments are alarmingly ineffective at holding anyone accountable for violent crimes, as reflected by low “clearance rates” (whether any suspect is ever charged for a reported crime). For example, a recent study found Chicago has a homicide clearance rate of about 40 percent, which drops to just 22 percent when the victim is African American.

3. Investing so heavily in policing is not evidence-based.

The uniquely American dependence on police as first responders to every social problem is the product of decades of reliance on antiquated and disproven theories about safety, the fearmongering of powerful police lobbyists, and policymakers’ racist support for devastatingly harmful militarized policing in communities of color. Policing as a one-size-fits-all solution to violence is simply a bad and dangerous policy choice made by elected officials — one they now have a responsibility to correct.

4. There is no connection between violence and police budgets.

America has steadily increased police funding year-over-year regardless of whether crime rates are going up or down. There is no documented connection between the two. In 2020, for example, Houston, Nashville, Tulsa, and Fresno all increased their police budgets — and all saw increased homicides. Most experts believe the recent increase in homicides in some cities is due to the pandemic, economic stress, unprecedented gun sales, and the defunding of community services — not a lack of resources for police.

5. There is a connection between violence and defunding social services.

As noted above, community investments have proven effective at reducing violence, and the converse is also true: Underfunding and defunding these supports for decades in communities of color has a deeply destabilizing effect that increases the likelihood of homicide, violence, and other crime.

In addition to long-term investments in social infrastructure, “violence interruption programs” — community-driven interventions to prevent or peacefully resolve conflict — are proving remarkably effective. For example, in Baltimore, directly impacted staff and volunteers of the Safe Streets Program engage in conflict resolution and connect people to services and resources. Since last June alone, the group has peacefully resolved over 400 conflicts without police, 70 percent of which involved a gun.

7. Most communities are still safer than they have ever been in modern history.

While any and all loss of life to violence is tragic and unacceptable, elected officials who are charged with crafting sensible policy would be wise to keep some long-term perspective in mind. In 1980, there was an average of 10.2 murders per 100,000 people nationwide; in 1991 it was 9.8. In 2020 there was an average of 6.5 murders. In recent months, although homicides in particular have ticked up, overall violent crime continues to fall or remain near all-time lows. For example, in New York City, violent crime overall is currently down and homicides down 2.4 percent compared to the same time last year.

8. Many more police officers could focus on violent crime without increasing police budgets or adding officers.

The data show officers spend more than one-third of their time responding to non-criminal calls, and about 80 percent of the arrests they make are for low-level and non-serious offenses like “disorderly conduct” and substance use violations. Just 5 percent of arrests and 4 percent of police time are spent on the most serious forms of interpersonal harm. This focus on low-level arrests fuels racial injustice, harms families, and sows distrust. It also means police departments are spending a fraction of their enormous budgets on investigating violent crimes. Starting today, mayors and police chiefs could follow the lead of other cities that have prohibited officers from focusing on some low-level offenses, and shift more officers and resources into investigating homicides and violence, while investing new dollars in non-police alternatives that will actually address the root causes of violence.

Violence is caused by many different things, including poverty, alcohol, guns, interpersonal conflict, unmet mental health and social needs, juvenile trauma, and more. It is no wonder then that relying on a single approach — policing — has not worked in the past and is not going to work to meet the moment now.

10. We know what works to build safe and healthy communities.

Reducing violence is difficult and takes time, but the solutions are not mysterious. To see them in action, just look at a nearby affluent (likely majority white) neighborhood or community. You’re likely to find a neighborhood where people have stable, well-paying jobs and access to well-funded public services, experience little violence, and have a fairly small police force that responds only when it is wanted. Instead of fully and equitably funding all these same approaches in low-income communities and communities of color, we overfund police year after year after year.

This is a critical moment to decide which path we are going to take to combat violence. Are we going to continue the racist, harmful, and dangerous status quo of endlessly cutting blank checks for police while neglecting proven alternatives? Or will we finally decide to fully invest in a more effective multi-pronged approach to public safety and community health?

As you are reading this article, there is a good chance that your city leaders are debating whether to increase their police department budgets instead of spending those dollars on violence interruption programs, affordable housing, or recreation centers. They are likely weighing decisions about how to spend billions of dollars in new federal funding that can either be allocated to police or to alternatives like mental health care services.

Paige Fernandez is Policing Policy Advisor for ACLU.  Taylor Pendergrass is Deputy Director of Campaigns for the ACLU.

Share:
Tags:ACLUPolicingViolence
Previous : Guest Commentary: Restorative Justice a Viable Option for Those Who Are Incarcerated
Next : Opponents of DISC-2022 Push Back against Another Project, June 2022 Timeline

One thought on “Guest Commentary: 10 Things to Know about Combating Violence in America”