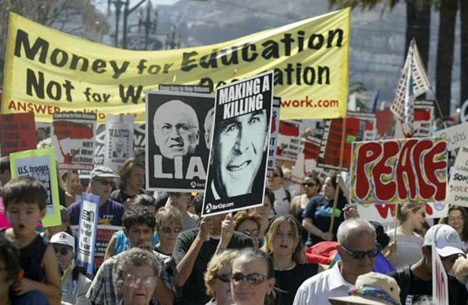 In remembrance of those that were harmed and killed, I vow to continue to take a knee at the playing of the anthem as a public display of solidarity for those that die at either end of a US made gun, wherever one is fired, and for those who put their bodies on the line to wage peace.

At 40, a privileged citizen with a young family and a job, I was completely aware of my responsibility to own what my country did or did not do. I wrote and protested and consistently stood against the illegal war declared against Iraq.

I was sad to know that not enough Americans had spoken out against the war, most not willing to learn the lessons of Vietnam. I died a little when the Afghan war started on October 2001 and died some more in March of 2003 at the start of the Iraq war. I cried with millions of others for the service men and women and the people of Afghanistan and Iraq that we had failed.

And I had entered 2001 with such hope. As the new millennium approached, our nation’s media and institutions had just learned how to be able to say the words “global warming” (that’s what they called climate change then.) I had just gone “all-in” to start one of California’s first commercial solar PV companies. It was a moment when US leadership seemed to have been cornered and had no choice but to address the international climate crises. And then poof ! The nation found a war squirrel to chase instead.

The Afghan war was a blunder from the start. Afghanistan could have used care and diplomacy to enable their own self-determination after previous decades of war. Afghanistan’s’ population

was not armed or interested in being terrorists. Instead of service, we delivered American jingoism and more social and economic displacement.

Of the huge amounts of war money, there was none to pay for a culturally schooled, Farsi speaking, US contingent. “Rag heads”, we raged, after the Twin Towers fell. We reacted by taking out a nation whose entire GDP would barely pay for one US aircraft carrier and whose people had 50 cents a week for health care.

After October 2001 and before the Iraq war, many of us were part of the largest anti-war protests. The world’s largest anti-ware protest took place on September 11th 2002. At least 36 million marched. This expression of democracy, along with federal laws, were trampled with lies (weapons of mass destruction) in the lead up to the Rice and Powell sanctioned war with Iraq that started in March 2003. The Rumsfeld’s and Wolfowitz’s of the world wore, as a badge of honor, the wasted opportunity for the US to be a moral and practical 21st century leader.

The war machine seemed all too prepared. Questions about the 2000 Presidential election haunt. Surely the 527 Florida votes more for Bush would have been overcome by the tens of thousands of black and brown Floridian votes disqualified by the “sunshine” state. What if Gore had been reading that children’s book in that classroom that 9/11 day. Would Gore have paid attention to the warnings from the security department and prevented the terrorist attack? Would war be an option to distract a nation from an unpopular president? Had war been the plan all along?

With the nation again fully engaged in Afghan and Iraq wars, the 40-year alt-right effort had succeeded in routing whatever remained of the hope of a peace centered Age of Aquarius US government (or society). The People’s Park struggles, that made strides during the Kennedy and Johnson Administrations, were recast as a legacy of ignoble domestic insurrections. With this 20-year war came much more police militarization, incarceration industry expansion and an onslaught of evangelized sociopathic toxic alt-right media.

Such is the wasteland of these last 20 years, where we have endeavored to keep our families firm and our friends from despairing. It has taken all that I am to be positive and hopeful that we shall yet rule by decree of care for each other and for the miracle of our thin layers of fertile soil and breathable atmosphere.

At the close of the Afghan war, we again vow to wage peace.

Scott Steward is a Davis resident

23 thoughts on “Guest Commentary: A is for….Afghanistan and America”