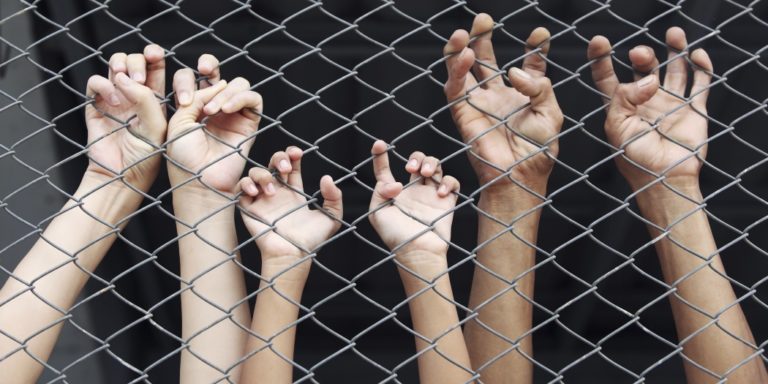 I am one of the 2.3 million people locked up in prison and one of the 92% who are fathers. But this data doesn’t tell you who I am or the damage that has been done to my family with me in prison.

I grew up in a close-knit family that cried together, partied together, traveled together and supported each other. I have two older sisters and two older brothers, and I was raised by my mother and father. I was an amazing first-time dad to a baby boy from the first moment I held him.

At 18 years old I had just finished high school and had been accepted into the International Academy of Design and Technology. But I didn’t have a legal job. I was a gang member, drug dealer, and all-around hustler. I took care of my son and bought him anything and everything I could. I spent every available moment I had with him.

I was also considered the greatest uncle by my nephews. I helped teach them how to read, dance, fight and so much more.

One of my greatest memories was having my son in bed and playing with a Tickle-Me Elmo teddy bear that laughed when you squeezed it. Elmo’s laughter brought about so much joy in my son that I couldn’t help but laugh along with him. We sat in the room for about a half hour laughing ourselves into tears until my sister came to see what was going on. Then she started laughing too.

I wanted to stop selling drugs once I finished college and opened a business creating interior designs for houses and business spaces. But less than three weeks before I was supposed to start college, I was arrested for murder and attempted murder and later convicted under the theory of accountability.

As quickly as it took for the police to place me in cuffs and walk me out of my home, the trauma of that day would become the thread that would affect my family for years to come in ways that I could never have imagined.

My mother would come see me in the county jail and tell me about how my son was trying to open the door to my old room to see if I was in the room. He was only 16 months old when I was arrested, but he knew what room we used to be in together. She told me how it brought her to tears because he didn’t understand I was gone. The story haunts me too.

My sister would come see me and tell me how my nephew cried for me after they brought him to see me, or when I talked to him on the phone. She didn’t really want to bring him to see me anymore because it hurt her to not be able to tell him when his uncle will be home again. She said she cries in her room so her son doesn’t see her.

My father was in prison at the time of my arrest, and he shared the pain too. He told me about how he found out I was in jail in his cell when my name flashed across the bottom of the news on television. He went to the shower area and cried in a shower stall so no one could see him.

Eight months after my arrest, my brother was kidnapped and killed. That was enough pain to cause my father to relapse and start using heroin again while in prison. My mother said she also would cry for days, not going to work or outside, and when she couldn’t sleep, she would drink herself to sleep.

As time moved on, I lost my pre-trial motion hearings, trial, and my appeal. After being found guilty, I got on bad terms with some of my family because they thought I should have plead guilty. Because of the lifestyle I had led, not even my family believed that I didn’t have something to do with this crime.

The problems with my son and nephews only continued to get worse as did my family bonds. While we all blamed each other for the things going wrong, we didn’t pay enough attention to the kids and each other.

My son was acting out in school, having fights and being disrespectful to his mother, grandparents and aunts. My nephews were becoming more angry, disrespectful and violent.

Life seemed to start aligning with studies about the antisocial behavior of kids with incarcerated parents.

My nephews and then my son got involved with gang banging, selling drugs and running the streets. My son had been arrested more than 25 times before he turned 18 years old. My youngest nephew had been to prison twice before he turned 22. And as I pen this essay, my son and one of my nephews are sitting in the county jail both fighting separate cases of murder and attempted murder.

According to a 2002 report, “children of incarcerated parents are five to six times more likely than those without imprisoned parents to enter the criminal justice system.” My family was now part of that statistic.

After losing several appeals I found myself wondering if I ever would be free again, or if I would be released before I became an old man.

On November 23, 2018, the members of the Illinois Torture Inquiry Relief Commission found it more than likely that I could’ve been tortured by detectives during my interrogation after my arrest. My sentence is supposed to be reviewed in an evidentiary hearing, but in the meantime, an appeals court overturned part of my case, reducing my sentence.

I’m 17 years into a 48-year sentence for an act I have said from the start I didn’t do. And even though I’m so happy to have the chance to be resentenced to any time less than 40 years, I can’t help but wonder about the damage this time away has done to me and my family.

Prison has made me cold-hearted to other people’s pain, and I feel I have grown apart from my family in more ways that once made us close. This time away has planted seeds of distrust about people’s intentions, and I have lost years that can never be given back.

I will forever wonder what if I had gone to college and my son and nephew had grown up with me, watching as I worked and then opened my own business, what would’ve become of their lives and my life.

Share:
Tags:Prison Journalism Project
Previous : Defense Attorney Ordered to Show Cause after Failing to Check in Six Times on Five Cases
Next : Looking Back: NYS DA’s Association’s Endorsement of Videotaped Police Interrogations Does Not Obviate Need for Legislation