Davis, CA – Every so often it is a good idea to put Davis within a national context.  Davis has now fundamentally changed the way it handles certain types of calls for services—moving mental health calls to be handled by crisis responders rather than simply cops and moving homeless services, for instance, to a department of social services.

Matt Ferner, reporting in Safer Cities, notes that not only is it a trend, but it has strong backing from the public.

For one thing, “Medical professionals are better equipped to handle these calls. Their training means that they are better able to deescalate these tense situations and to connect the person in crisis with services and programs that will address the trauma and reduce the likelihood of future calls for service.”

Moreover, “Police officers are spread too thin. Asking officers to respond to homelessness-related calls or mental health crises means they are not doing the most important job that they are uniquely trained and qualified to do: solve serious crimes like murders and rapes.”

One of the points I tried to make earlier this week is that, while the city has not been able to find the funding to add 5 to 7 new police officers (which is a lot more than $434,000), by re-routing mental health crisis calls they could free up their existing officers to be more responsive to other calls.

officers to focus their efforts and limited resources on that critical work.”

New polling from the two is reported this week.  They conducted a national survey of 1223 likely voters using a web panel survey.  The sample was weighted to be representative of likely voters by age, gender, education, race, and voting history. The margin of error is ±3 percentage points.

The findings here are pretty informative and give how far left Davis voters trend on such issues, and are probably in line with the public in Davis.

In addition to more than two-thirds of the respondents favoring medical professionals as first responders, they also found that nearly three-quarters support the creation of a new agency.

“73% of voters support creating a new agency of first responders, like emergency medical services or firefighters, to reroute some 911 calls away from armed police officers to medical professionals who are better situated to respond to mental health and homelessness related situations than armed police officers. (Net Support = +52)” 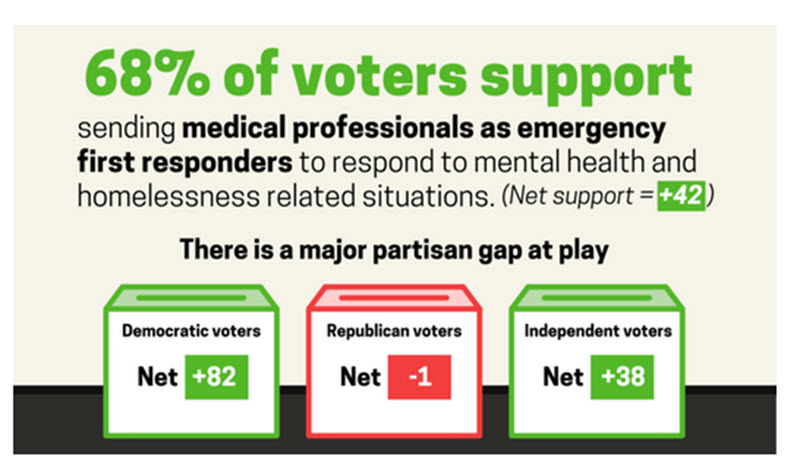 That means there is strong support nationally, therefore, to do what Davis has just done.

There is a rather sizable partisan split here.  Overall, 73 percent of respondents supported a new agency, for example.  But for Democratic respondents the number was 91 percent, with 49 percent of them strongly supporting and only four percent of Democrats opposing.

For Republicans, however, the support was more a modest 55-37 and just 16 percent strongly in favor.

There is a sizable racial gap as well.  Just 29 percent of whites were strongly supportive, but 70 percent overall.  For Blacks it was 86-11 with 53 percent strongly in support.

All of this dovetails with our experience in Davis where there really was no opposition to the changes.  Neither the police chief nor the DPOA weighed in.  While council over the last year has received thousands of communications in support of the changes, they reported at the last meeting that they hadn’t received any opposition to it, at least in advance of the last meeting. 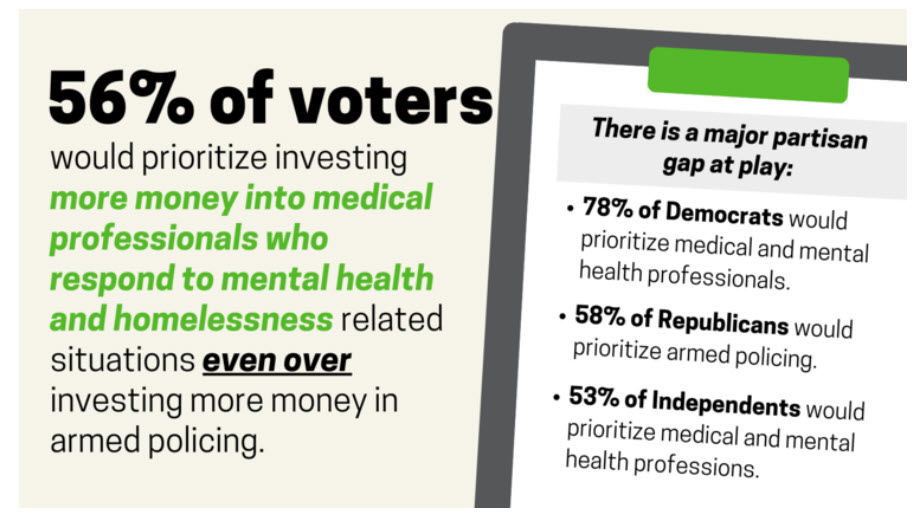 There are partisan gaps in the responses to both questions, but once again, Republicans and Independents, while less likely than Democrats to support these kinds of changes, still are more likely than not to support them.

“These results should send a loud signal to public officials that putting safety first means building and funding programs that recognize the difference between threats and trauma and tailor responses that work in parallel to and complement traditional policing,” he concludes. “Of these programs, very few of them are as popular with voters as enlisting medical professionals as emergency first responders.”

While we don’t have local polling on these questions, the magnitude of Democratic support combined with who responded publicly to the proposals is suggestive that the Davis community is probably in line with national Democrats as well as voters overall on this crucial issue.

7 thoughts on “Commentary: Moves by Davis City Council on Policing Part of a National Trend”