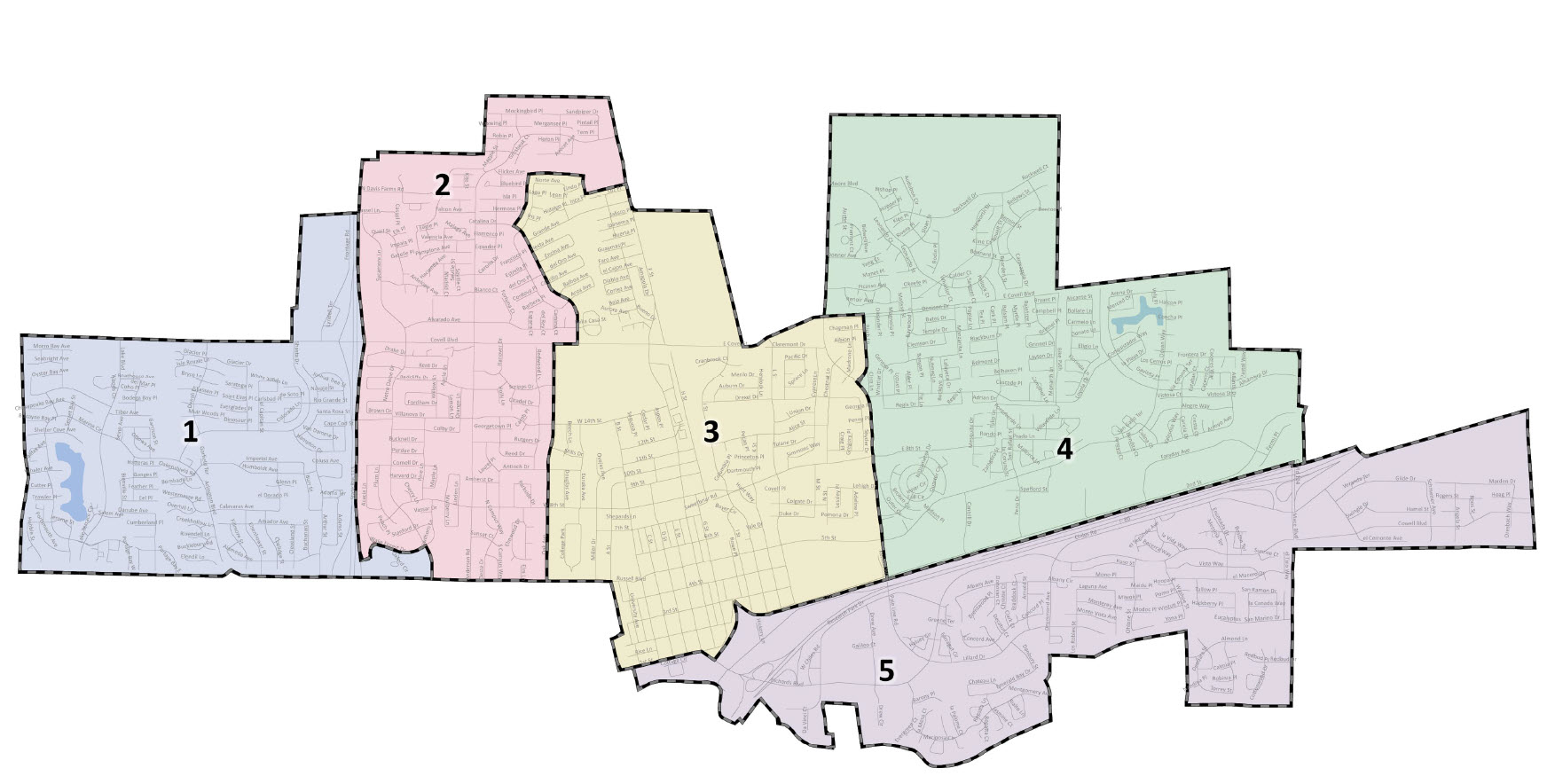 Davis, CA – It seems like the city of Davis just did this.  In quick fashion in 2019, the city of Davis, responding to a potential lawsuit by Matt Rexroad on behalf of his clients, Davis shifted to a district election system and drew maps for the 2020 election.

But 2020 will likely be the only time those maps are used.  In preparation for the 2022 November election—the next council election—and for the next decade, the city will now undergo a redistricting process.

“Following each decennial census, cities are required to review, and if necessary adjust, the boundaries of its districts to ensure compliance with the Voting Rights Act,” city staff wrote. “Even though the City of Davis recently transitioned to districts, we must still engage in the process of redistricting using 2020 census data.”

In 2022, elections in District 1 (Dan Carson) and District 4 (Gloria Partida) will take place.  While that completes the full transition to district elections, it also means the previous boundaries were never used for those two districts.

Costs related to the redistricting process are in the current budget and will be funded through the General Fund.

“Redistricting Partners will provide demographer services at a cost of $44,000, and an online community engagement mapping software license was purchased for $7,000,” staff reports.

The city is proposing a schedule that will begin on November 2, 2021, and end on February 15, 2022  They will receive input, share first drafts of the maps by January, finalize the maps on February 1, and two weeks later they will vote on the final version of the maps.

In order to get there, “City Council must hold at least four public hearings to provide input regarding the composition of districts. The early hearing(s) are intended to explain the process and gather information; the subsequent 2-3 hearings are to share draft maps and ultimately approve a final map.”

As before, the public will be requested to provide input regarding Communities of Interest.

“The COI feedback relating to the 2022 redistricting process will help City Council in considering how any proposed changes to the 2019 districts may impact protected classes or other identified groups,” staff writes.  “Some COI are considered ‘protected classes’ in that they have rights through civil rights or voting rights laws.”

In Davis, that is everything from locations, to demographic groups, to students and renters.

According to staff, “Maps must be based on legally required redistricting criteria and take into consideration many things, including the existing lines from the 2019 district map, census blocks, voting precinct, neighborhood associations, existing planning areas, major roads, and COI feedback.”

In addition, “Cities must redistrict based on total population data (including population adjusted to count incarcerated people at their home address, not their prison address). Districts must be substantially equal in population, although deviations of less than 10% are generally constitutionally acceptable.”

The following legally required criteria, in order of priority, must be observed when redrawing districts:

According to early data released from the 2020 decennial census, Davis’ population is 66,850, which translates to an ideal district size of 13,370 each,” staff writes.

Finally, staff notes they are “not recommending City Council pursue a commission process at this time.”

They write, “The City recently conducted an extensive community process in late 2019 during the transition from at-large to by-district elections. Time and effort was spent by City Council on education and outreach to educate and involve the public.”

6 thoughts on “Council to Lay Out Redistricting Process”