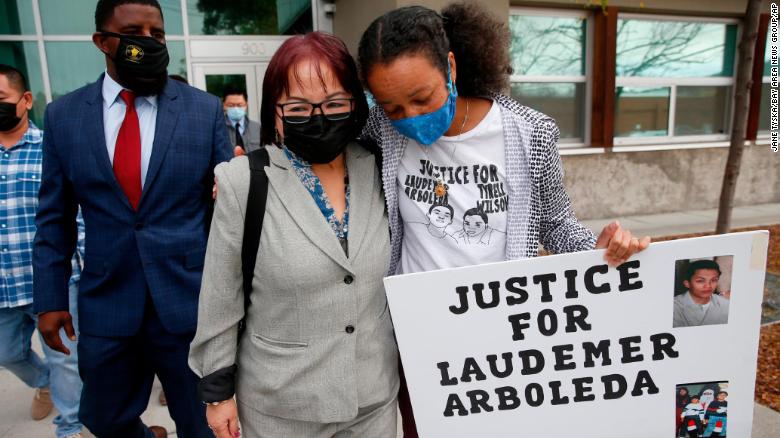 But the jury found Andrew Hall guilty of assault with a firearm.

According to the prosecution, Hall used “excessive, unreasonable and unnecessary” force when he shot Arboleda nine times as he fled police in a low-speed pursuit.  The defense claimed that Hall feared for his safety and argued that police need to make split second decisions.

While not the verdict her office sought, Contra Costa County District Attorney Diana Becton said on Tuesday this marked a measure of justice.

“Today’s guilty verdict holds accountable defendant Andrew Hall for his excessive use of force in the fatal shooting of Laudemer Arboleda,” Becton said in a statement released by her office.

She added, “Deputy Hall’s actions were not only a crime, but they tarnished the badge and they harmed the reputation of all the good, hard working police officers that work for our community. My office extends our condolences to the family of Mr. Arboleda.”

With the hung jury, Becton’s office could retry the former officer.  She did not commit to a course of action on Tuesday.

Becton said, “With regards to the voluntary manslaughter count, we will take the matter under

review to determine the appropriate next steps.”

On Facebook, Adante Pointer, one of the attorneys who represents the mother in a civil lawsuit, along with John Burris and Melissa Nold, said:

“Today the jury returned a historic verdict holding disgraced and two time killer Andrew Hall criminally responsible for the death of Laudemer Arboleda. While the jury did not give complete justice to the family I KNOW that getting a district attorney to even criminally prosecute killer cops is hard – let alone a jury to convict one on any charge,” Pointer posted.

He told media on Tuesday, “We received partial justice, but it was a big step, a big step towards holding Andrew Hall responsible.”

Becton told the media, “I certainly hope that there’s an understanding that there is really no one in our community that is above the law.”

An advocacy group, Conscious Contra Costa, issued a statement following the verdict stating that it was glad “to see Andrew Hall be held partially accountable in this case of the unjustified and egregious killing of Laudemer Arboleda.”

The group called it “an historic ruling in support of police accountability in our county.”

Meantime, Contra Costa Sheriff David Livingston was not happy with the verdict.

“Although I wish the jury had returned a not-guilty verdict on all counts, I respect their service. We ask our officers to make split-second decisions and many of the jurors understood that,” said Sheriff Livingston in a statement. “I urge DA Becton not to retry this case. I also urge her to take down the posts on her reelection campaign social media where she touts this prosecution.”

Danville actually contracts with the sheriff’s department for policing service.

A sheriff’s investigation after the 2018 incident cleared Hall of any wrongdoing.

But the district attorney’s office announced it was pressing charges in the 2018 case after Hall was involved in a second shooting earlier this year.

At a press conference back in April, Civil Rights Attorney John Burris announced that lawsuit after Hall shot and killed Tyrell Wilson, a homeless Black man diagnosed with schizophrenia.

The lawsuit described Hall as “a murderer hiding behind a badge and a District Attorney’s office who has never in recent memory prosecuted a police officer in an Officer-Involved Shooting, and a police department and Sheriff’s Office that let this murderer back on patrol.”

That shooting is still being investigated by the Contra Costa DA’s Office.

In both instances, the families of the deceased said the men suffered from mental health issues.