It was a horrible story out of Alamo, Georgia, as CBS News reports: “A man accused of gunning down a Georgia police officer during his first shift with the department ambushed him in retaliation for the officer’s arrest of an associate hours earlier,

But instead of mourning the senseless killing of the 26-year-old Dylan Harrison, Orange County DA Todd Spitzer tried to use the opportunity to attack his political opponents… in California.

The tweet at 12:18: “Progressive DAs are cheering. Their outrageous policies embolden criminals to kill police. Shameful. Cop, 26, shot dead first day on job with armed suspect on the loose.”

That seemed way over the top, even by the standards of this particular DA.  I felt compelled to respond, so I screen shot the initial tweet and tweeted myself: “Really? Why is @toddspitzeroc politicizing a horrible tragedy? Shouldn’t this kind of rhetoric be out of bounds in a civilized society?” 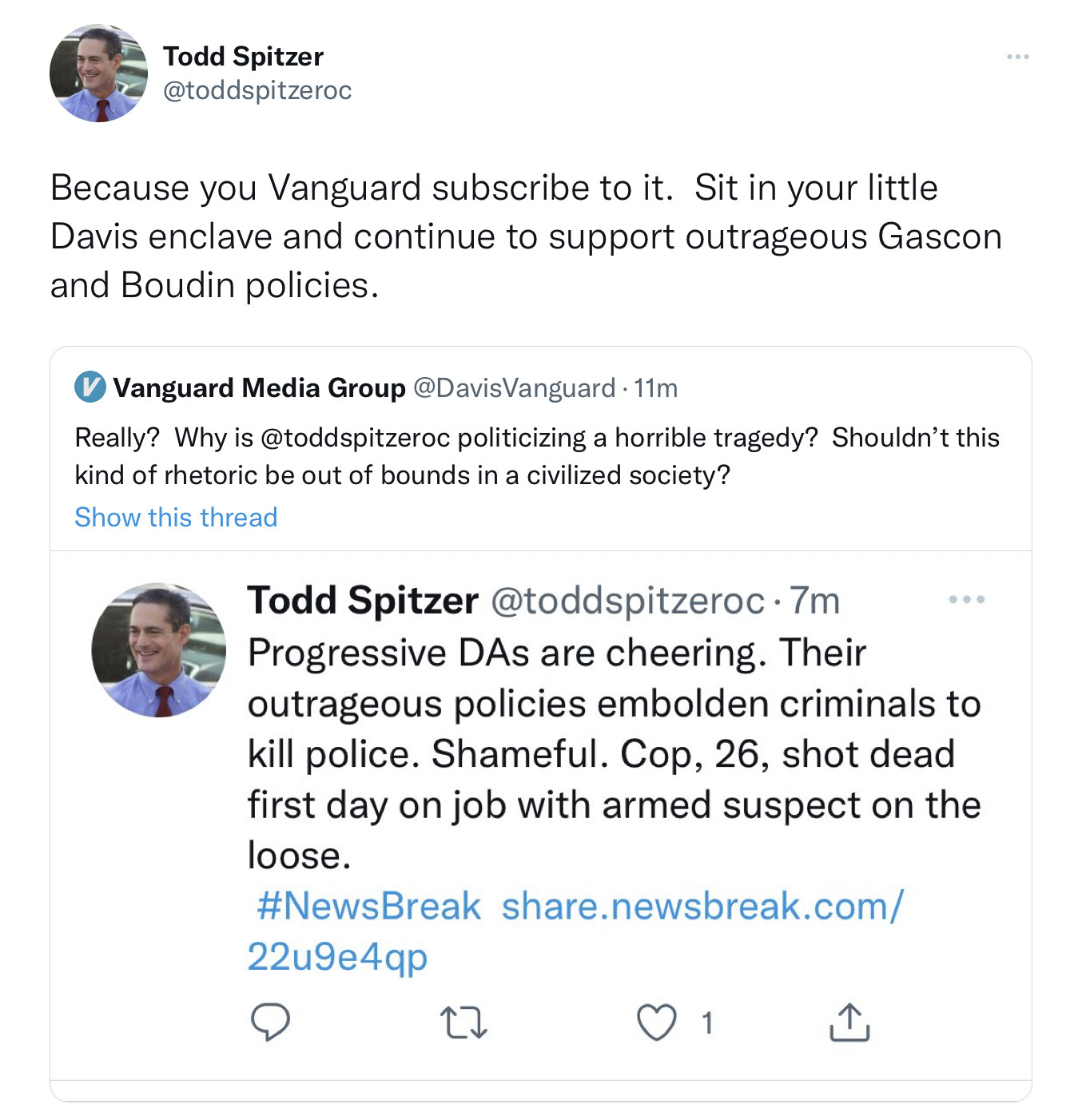 Instead the DA responded: “Because you Vanguard subscribe to it. Sit in your little Davis enclave and continue to support outrageous Gascon and Boudin policies.”

In addition to my initial tweet, I also have pointed out, as I have many times, that officer-involved shootings are actually fairly low at the moment.  This year, just 47 officers have been shot and killed in the line of duty this year—that is too much, but it’s also less than half of what it was at its peak in the early 90s.

On the other hand, the leading cause of death for police officers?  COVID.  Yet, as we have seen, police are fighting vaccinations.

I tweeted in follow up: “According to current statistics, *just* 47 officers were killed by homicide this year year compared to 224 by COVID. Perhaps a vaccination drive might be more fruitful than overheated rhetoric about police shootings?” 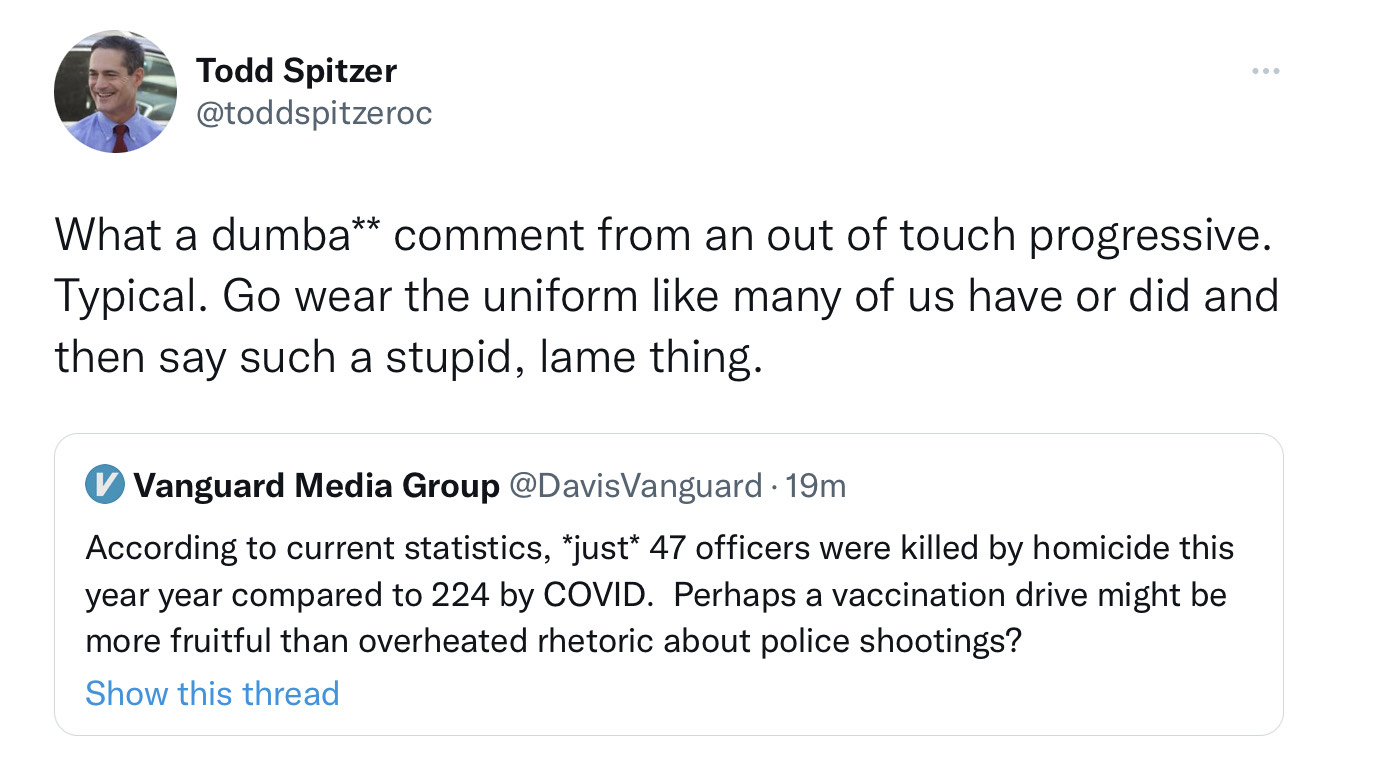 Spitzer responded: “What a dumba** comment from an out of touch progressive. Typical. Go wear the uniform like many of us have or did and then say such a stupid, lame thing.”

This is the continuation of a very strange career.  Todd Spitzer in 2018 ran against incumbent Tony Rackaukas following a series of very damaging and confirmed allegations in the informant scandal.  Backed by the same groups he is now attacking, Spitzer, a former Republican Assemblymember, defeated the incumbent.

But Spitzer himself came under fire when he seemingly did little to clean up the informant scandal and a new scandal emerged—the evidence scandal—where it became clear that sheriff’s deputies were mishandling huge volumes of evidence they were supposed to be securing and then producing as discovery.

As LA Times reporter James Queally put it in a tweet, “The D.A. of increasingly purple Orange County, who is facing a progressive challenger in 2022, appearing on hard-right/fact-allergic Newsmax is certainly … a choice?”

He added, “Ain’t here to referee people’s media choices, but seems an odd political choice considering where these people are (or could be) running campaigns.”

Personally I was a bit surprised that Spitzer immediately came out attacking Pete Hardin by name—which is generally not something you would see in a political race where the incumbent does not generally want to give the challenger name recognition.

It’s all a strange turn around for a guy who ran as a reformer.

When he first announced, he stated, “I refuse to stand by as Tony Rackauckas destroys the District Attorney’s office and uses it as his own personal fiefdom for him and his cronies while the public’s safety suffers.”

Last year he told the media, “Trying to restore the integrity of the office is not easy.  If we’re going to run a system the public trusts, we’ve got to abide by the rules.”

But, increasingly, supporters have said, he is no better than his predecessor.

“Todd Spitzer staked his entire campaign on reform, but at this point it feels like a bait and switch,” said Laura Fernandez, a senior Liman Fellow in Residence at Yale Law School and a national expert on prosecutorial misconduct.

Fernandez continued: “Instead of the transformation he promised, moving the OCDA toward transparency and accountability, what we’ve seen from Spitzer is the preservation and, in effect, validation of the very system he railed against as a candidate.”

And now what they are seeing is a politician who is acting in an increasingly erratic manner.

In a tweet, Hardin responded in April, “Rather than focus on the pressing issues confronting Orange County, DA Todd Spitzer spends his days fear mongering on Newsmax.”

Or apparently taking to Twitter on Sunday afternoon to throw insults at members of the media.