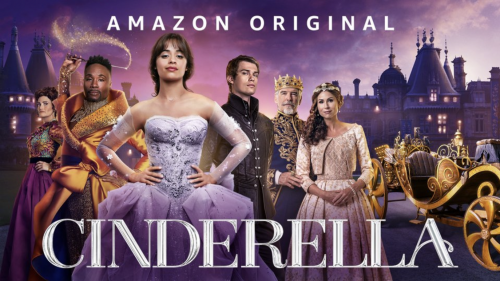 DAVIS——The 2021 Cinderella movie, available to stream on Amazon Prime, offers a new take on the classic tale. The well-known singer Camilla Cabello stars as Cinderella, accompanied by Pierce Brosnan (as King Rowan) in a progresssive and musical film. Many live action Cinderella movies have traditionally held similarities to the original film, but producer and director Kay Cannon provides a more refreshing retelling.

The film clearly has progessive traits. For instance, instead of being called by the given name Cinderella, Cabello’s character adopts the name Ella to demonstrate her independence from her given name. In addition, instead of dreaming of marriage like other girls her age, Ella dreams of running a clothing boutique and becoming a businesswoman. Similarly, the so-called villainous stepmother, or Vivian, is given more depth as a character rather than simply retiring to the qualities of vanity and selfishness. Her cruelty branches from personal disappointment in being unable to pursue her career, and her compulsive need to wed her children is due to her pragmatic attitude towards life. I personally enjoyed this new spin on the Cinderella story and I feel that the new dimensions it added to the characters subtly addressed important issues related to gender roles and character stereotypes.

This film also gives women a greater role in politics and government compared to its counterparts. According to Screenrant, to respond to dated genders roles in society during the medieval times, Princess Gwen, one of the main characters (and sister of Prince Charming), is recognized for her efforts in trying to improve the kingdom, giving the political ending of the story a surprising twist. The film does not reinforce gender stereotypes and as a result, is more enjoyable to watch in my opinion.

In addition to having female empowerment, the film also has many comedic scenes of Gwen hiding behind portraits or objects in order to further her ideals, which I personally found amusing.

One interesting twist Cannon added was making the fairy godmother “genderless,” which is a powerful move, as shown through Billy Porter according to Deadline. The film portrays “magic” as genderless and indirectly encourages people to be more open about their sexuality. Porter is the first openly gay African-American actor to ever win a Grammy and since has taken roles that promote gender fluidity.

While there is some representation for LGBTQ+ groups, the fairy godmother character does not have a huge part within the overall movie, according to the New York Post. It would be more interesting to see characters like these have more developed roles, in my opinion, though this Cinderella movie was a good start. Additionally, it would be engaging to see a Cinderella film where the main protagonist does not need a “prince on a white horse” to satisfy or achieve her happy ending.