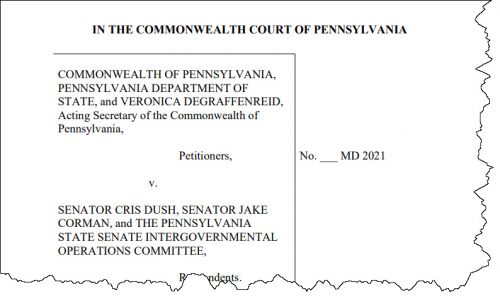 Now, civil rights advocates and eight voters have joined the Pennsylvania Attorney General’s lawsuit against the state Senate Republicans to declare the subpoena unconstitutional for violating the privacy rights of voters.

The American Civil Liberties Union of Pennsylvania and the law firm Schnader Harrison Segal & Lewis LLP will be representing the advocates and voters in filing their motion to intervene.

There is no statement from the Pennsylvania Senate as to how the voters’ personal data will be protected during the analysis process.

However, chair of the Senate Intergovernmental Operations Committee, Senator Cris Dush, addressed that the review process may parallel Arizona’s review that was conducted by security consulting service Cyber Ninjas.

The ACLU of Pennsylvania and Schnader Harrison Segal & Lewis LLP are asking the Commonwealth Court to deem the subpoenas unenforceable for violating the constitutional privacy rights of voters in Pennsylvania.

“These subpoenas are a frightening violation of voters’ privacy and an egregious abuse of power,” said Common Cause Executive Director Khalif Ali.

“Some of the data subpoenaed is usually exempt from public release because of privacy concerns, and that information could be a goldmine for identity thieves. Pennsylvanians deserve to have their private information protected by the people they elected to office,” Ali added.

“With this sham election review, Pennsylvania legislators are intentionally injecting discord into our election process and threatening the personal privacy of millions of voters,” said Terrie Griffin, president of the League of Women Voters of Pennsylvania.

“Pennsylvania’s 2020 election was executed safely and securely. This election review is a blatant attempt to weaken voters’ trust in our election system while exposing their sensitive data to possible exploitation and manipulation. Voters’ private data must be protected,” noted Griffin.