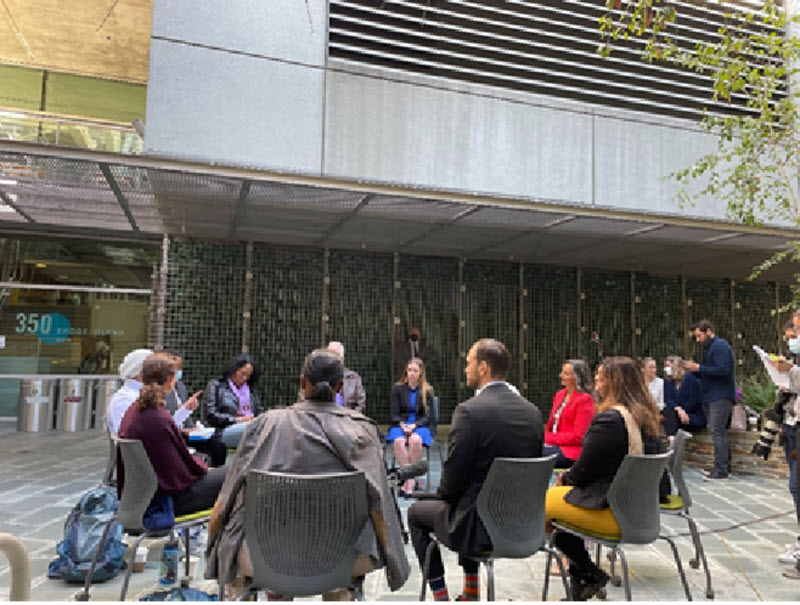 SAN FRANCISCO, CA – San Francisco District Attorney Chesa Boudin held an open and honest space for survivors to speak to their traumas and calls for action this week in a session also attended by Contra Costa District Attorney Diana Becton and an advocate from the Prosecutor’s Alliance.

The goals of the morning were to simply listen and hear from the seven survivors and understand how reform can be made within the District Attorney’s office.

“We want to make sure your [the survivors’] voices are at the center of that discussion,” DA Boudin stated.

Each survivor began by introducing themselves to the group and briefly describing the type of crime that had impacted them.

The first survivor was a victim of gun violence at the 2019 Gilroy Garlic Festival, and also a victim of a hit and run car accident that left her with life changing back surgery.

During the 2019 Festival, a gunman murdered three individuals and left 17 others injured, according to the

This survivor stated that she experiences a lot of PTSD and is often triggered by loud noises, as well has a lot of financial issues with little to no sick days off at work.

The second survivor also experienced gun violence when he was present at the 1993 California 101 shooting in San Francisco, noting “It’s been over 28 years and it still affects my life…it just changes you,”

The third survivor was a mother of a 19 year-old-girl who was shot and killed one day when she was out with friends. Around the mother’s neck was a purple button of her daughter’s face pinned to a purple scarf.

“I have to…fight for her…and make sure those involved are held accountable,” because her family is still investigating the murder, she told the group.

“I never talk about that experience,” she said, but decided to be present with DA Boudin and the others in order to share her story and be an advocate for change, noting, “Criminal justice is about the criminal not the victim,” she said, “the justice system is not about me.”

The fifth survivor experienced domestic violence and the death of her brother.

At just 20 years old, this survivor’s brother was murdered, and to this day she still experiences survivor’s guilt.

She explained that after the incident occurred, she got pregnant and considered taking her own life due to the immense trauma and suffering she was facing – “You don’t overcome losing somebody,” she said.

She says she now advocates for her daughter who saved her life. She explained how the impact on others who were not even there at the incident, like her daughter, is immense and generational trauma needs to be dealt with and addressed properly.

When trying to access victim services, this survivor’s father was turned away by former DA Kamala Harris who told him “if you or your family show up [to an event] you will be arrested.”

This survivor nor her father were ever treated with basic human dignity, she said.

The sixth survivor was assaulted and hit over the head with a butt of a gun by a teenager on the streets two years ago, experiencing head trauma, loss of hearing, and an eating disorder.

Today she is hyper vigilant of people around her and their actions, she explained to the group.

After her assault, she was unable to skip work or claim affordable medical care for her injuries. Today this survivor still does not know who attacked her and is still paying for forms of therapy that should be covered by the Victim’s Compensation Board.

The seventh and final survivor experienced the murder of two of her brothers and the subsequent death of a third.

In 2013 one of her brothers was murdered at 22 years-old while he was committing an alleged crime. Because of this fact, her family was not eligible for services from the Victim’s Compensation Board.

In 2017, she lost her other brother to murder and shortly after her third brother took his own life as a result of the trauma and suffering.

This survivor shortly became the provider for her family as everyone around her was grieving. She “had to take days off work” and felt the effects of that.

Today, this survivor works to end mass incarceration but also pushes for victim’s rights and services so that another family does not have to go through what her family did.

“What is justice for us?” she asks, “it’s too narrow, noting proper justice and services are important because “unaddressed trauma plays a huge role in all of our life experiences.”

DA Boudin then thanked all the survivors for being vulnerable and open to sharing their stories.

Each survivor stated they were never truly helped or compensated and only had negative things to say about the VCB – one in four victims get access to the services the Victim’s Compensation Board offers, survivor #7 said.

For many of the survivors there were too many barriers for eligibility and simply navigating the website was too difficult. The website is confusing and there is no explanation of what the services actually are nor how they work.

“They’re full, they don’t contact us or call us back,” survivor #3 said, “sometimes I feel like I have to be the detective for my daughter’s case.”

On top of that, on the rare occurrence that survivors are contacted the turnaround time is very slow and there is no direct line of communication for those who are experiencing emergencies.

For survivor #5, her parents spoke little English and no interpreters were offered to help them fill out the proper paperwork and survivor #6 waited one full year to get her compensation.

Survivor #4 gave up searching for help a long time ago, arguing “I’m not looking for them to help me anymore,” she said, “I just wished they had someone for us to go to… I want change.”

For survivor #2, it has been 28 years since the afternoon of the incident, but he wants services to be ongoing because he said trauma never leaves – “You can see everyone was damaged in some way,” he stated heavily.

Survivor #1, and the others who were present at the Gilroy Garlic Festival, were never contacted even though the ticketing company had access to everyone’s names and email addresses.

“I was falling into a deeper and deeper hole and there was no ladder long enough to pull me out,” she said in between tears.

The discussion then finished with each survivor explaining their wishes for reform and change within the system and within the DA’s office.

Many of the survivors spoke of the police and media’s response to their incidents and that the way they handled it was unhelpful, inappropriate, and just made the situation worse.

Directly after the 101 California shooting, the survivor was interrogated and followed by media who were asking him to re-explain everything that happened inside the building.

“There needs to be some real rules” in regards to media training with trauma victims, he suggested to DA Boudin.

Survivor #3 suggested that the community come together to support one another so that no other mother has to see their child die.

“Everybody needs to wake up and take part,” she stated.

She, along with all of the other survivors, suggested that follow up reports need to be made and in a timely manner.

“Being helped early on would solve a lot of issues,” one survivor said.