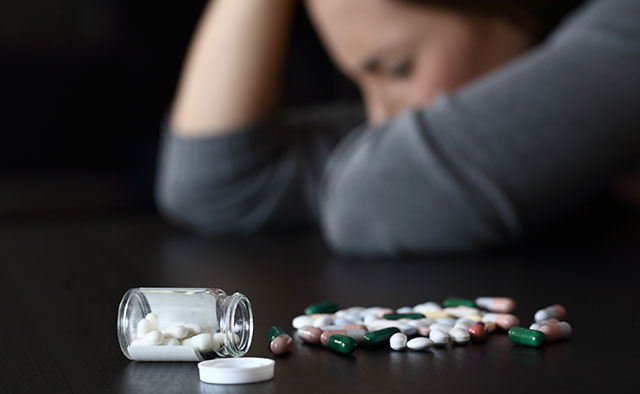 We have years of empirical data which show that arresting drug dealers and applying harsh penalties does not reduce drug use.  So why would we embrace war on drug policies?

And yet we continue to do so.  Every year the US spends about $51 billion on drug enforcement efforts.  In 2020 alone, 1.16 million people were arrested, 90 percent of those for possession and only a small percent for sales.

Moreover, the system is racially biased—Blacks accounted for 24 percent of those arrested despite making up just 13 percent of the population and despite consistent findings that Blacks and whites use and sell drugs at similar rates.

While the war on drugs is not the only driver of mass incarceration, 20 percent of those incarcerated are there for a drug offense.

The current DA in Yolo County on the one hand seems to recognize that we cannot enforce or incarcerate our way out of a drug problem, but on the other hand wants to charge drug dealers with murder if someone overdoses.

The reality of course is that they are not going to get the top drug traffickers that way, because the chain of custody is so

long and difficult to track, you will never connect a person ODing with someone at the top.  And, even if you could, drugs get cut and mixed so much it would be hard to track anyway.

In a way, the fentanyl crisis is a self-inflicted wound.

For years doctors have over-prescribed pain pills.  I remember in 2003 when I had my blood clot, I got a series of medicines starting with Tylenol, with codeine, then Vicodin, then eventually morphine and Percocet.  That was legit pain and I definitely needed those medicines and I could tell I was feeling better when I was willing to endure pain and got off the Percocet.  But often back then, they would hand out Vicodin like candy.

The problem is a lot of people would stay on those meds, they would get addicted and some would recognize that they could get the prescriptions so easily that they could sell them on the black market and make some money.

The result was a huge opioid epidemic.  Two things happened as the result.  One is that Kaiser and other providers became much more reluctant to prescribe narcotics, even when you really need them.  And two, people either unable to get prescriptions or for whom the prescriptions were no longer working, went to stronger stuff like heroin.

We had a podcast a few years ago and one lady told me that she was taking 17 pills at a time just to get a mild high.

It seems to me that the overdose rate really started to jump when they started cracking down on prescriptions.  That forced more and more people to turn to illegal drugs. 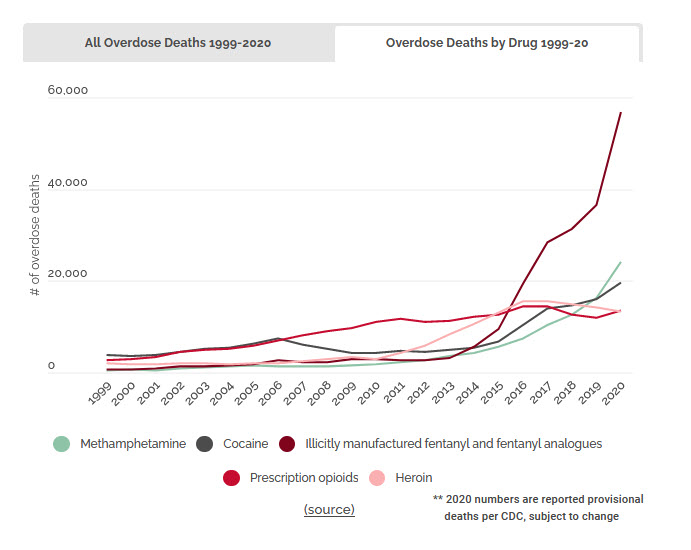 The chart from DPA shows that that overdose levels were relatively flat until around 2015.  They were going up slowly for prescription opioids, but what drives the chart here is fentanyl flying up, but the backside increase of meth and heroin is not unrelated.

The DEA has warned that there is a sharp increase in fake prescription pills containing fentanyl and meth.  “Drug traffickers are using fake pills to exploit the opioid crisis and prescription drug misuse in the United States, bringing overdose deaths and violence to American communities,” the DEA is warning.

The problem with heroin is that it’s expensive.  And so what has happened is that dealers are cutting the heroin with fentanyl.  Fentanyl has two advantages, first it is extremely potent.  And second, because it is synthetic and thus not produced by opium poppies, it is far cheaper.

But if you think you are taking heroin or a prescription pill and actually take fentanyl or fentanyl and meth, that is a lethal combination.

Moreover, because all of this stuff is on the black market—pills, heroin, fentanyl—there is no portion or quality control.

So what are the answers?

This is where the war on drugs mentality does not work.  We have been attempting to arrest our way out of this problem for 40 years.  The reality is that as long as there is a demand, someone will scheme to get rich off it.

In 2020, 92,400 people in the US died from an accidental drug overdose.  That’s far more than the number of people who died by murder or vehicular collisions.

We are spending $51 billion on policies that do not work and I would argue actually make the problem worse.

While we have a problem with prescription drugs, what would that overdose number look like if didn’t cut off people’s supply to safer prescription drugs?  By cutting that supply off, they turn to the black market, where there is no quality control, people don’t know what they are getting and people are using far more dangerous drugs like heroin and fentanyl.

The Drug Policy Alliance pushes for harm reduction and treatment.  Only 27 percent of outpatient programs offer medications for addiction treatment for opioid use disorder.  That is things like methadone.

Should we go after the distributors?  It’s expensive and not very effective, because as long as there is demand, someone will supply it.

But many states have counterproductive policies.  DPA notes, “911 Good Samaritan laws protect people who see an overdose and call for help from prosecution for low-level drug offenses.”

However, “many of the same states that have implemented 911 Good Samaritan laws have also arrested people for ‘drug-induced homicide,’ the act of providing someone with drugs that results in death.

“These cases often charge friends, loved ones, and low-level sellers with murder in cases of accidental overdose. Drug-induced homicide laws undermine 911 Good Samaritan laws, since people who could save lives are unlikely to call 911 if they fear being charged with murder or manslaughter.”

It sounds good to charge someone for murder when they overdose on the product.  The problem is who they end up getting is not the top-of-the-chain supplier.  We end up getting the people who are convenient to get, because it’s impossible to trace.

It is also more dangerous to do it this way.  If we treated this as a health problem we would be far better off.  You can wean people off the medication.  You can use things like methadone to help.  Or you can just make sure there is a safe supply of pills for people use—a lot of opium addicts are very functional and so long as what they are taking is safe and inexpensive, probably would not be hurt by it.

The least effective thing is what we are doing now—keeping the pills illegal, uncertain, and unsafe.  Plus we spend billions on fighting something that we really can’t win.

Share:
Tags:Drug Policy AllianceJeff ReisigOpioidsWar on Drugs
Previous : Six Men on Oklahoma Death Row File Injunctions to Halt Executions on Basis of Being Required to Choose Own Execution Method
Next : Sunday Commentary: We Won’t Be Ending Measure J Any Time Soon, So What is the Answer?

5 thoughts on “Sunday Commentary: We Need To Recognize That the War on Drugs Failed”