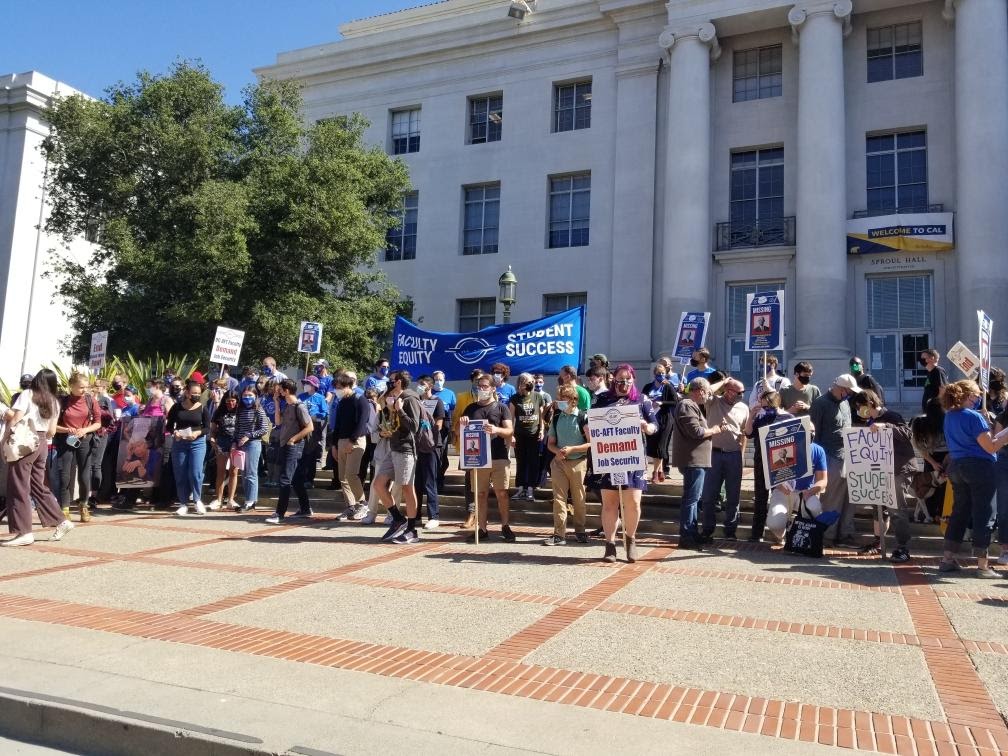 BERKELEY, CA— On Wednesday, September 29, the University Council American Federation of Teachers (UC-AFT) Union, representing 6,800 educators across the UC system, held a rally at Berkeley’s Sproul Plaza demanding that UC President Michael Drake meet with them and discuss their demands. Union members and guest speakers repeated their warnings of a strike if UC officials continue to ignore their concerns, including an annual median salary of under $20,000 for lecturers, according to the UCLA Daily Bruin.

Union members and student supporters alike attended this rally, held at UC Berkeley’s Sproul Plaza, a historical site renowned for decades of social justice activism. As Crystal Chang Cohen, a UC Berkeley lecturer in Global Economy and Global Studies, stated in her speech during the rally, 1,200 UC-AFT members work at UC Berkeley alone, and have continually been met with obstacles in attempting to negotiate with the administration.

Cohen then contextualized why the focus of the rally was specifically on President Drake, claiming, “We are here to call on the one person who has the power to bring everyone to the table and settle a contract. He has not said a word since taking office about our contract negotiations. And he would like to ignore us but we will not let him ignore us. We will not let him silence us. This rally today is to call attention to him to make him have to respond”

Shannon Garland, a member of the union and a lecturer from UC Merced, also mentioned the emphasis on meeting with President Drake to negotiate. “We are asking President Drake to avoid another strike by signing a contract with simple, common-sense measures that will bring job security,” Garland said.

Mia Mciver, a UCLA lecturer and the current president of UC-AFT, concluded the event by stating, “If we are forced to strike, it would be over things that most workers take for granted and most employers take for granted. Performance reviews, merit-based retention, consistent workload standards, and sustaining wages. If we are forced to strike over these things, it would be because President Drake’s administration is not reasonable. The future of our university is at stake. Our teaching is the beating heart of this university and our teaching deserves more, our students deserve more, and we deserve more.”

Throughout the rally, speakers emphasized the importance and potential impact of students supporting their cause. The event’s speakers energized the crowd of students, faculty, and community members with chants such as: “Whose university? Our university!” and “Hey yo Drake! Are you a flake? We teach for the students’ sake!”

One student attendee who wished to remain anonymous voiced her support for the union, noting that “One job should be enough [to make] a living wage.” Student organizations such as the UC Berkeley Young Democratic Socialists of America (YDSA) also attended the event in support of the union’s efforts.  “It’s unsustainable and morally reprehensible to put our lecturers in this position. It’s unfortunate that the people who are meant to build foundations for our education and future success have to face inhumane conditions trying to do that… When they suffer we suffer,” said Khamisa Kever, a student speaker on behalf of YDSA.

This story is developing and ongoing updates will be posted regarding the UC-AFT potential strike.

Diana Ochoa writes for the Vanguard at Berkeley's Social Justice news desk. She is a UC Berkeley student studying Political Science and Public Policy. She is originally from Southern California.