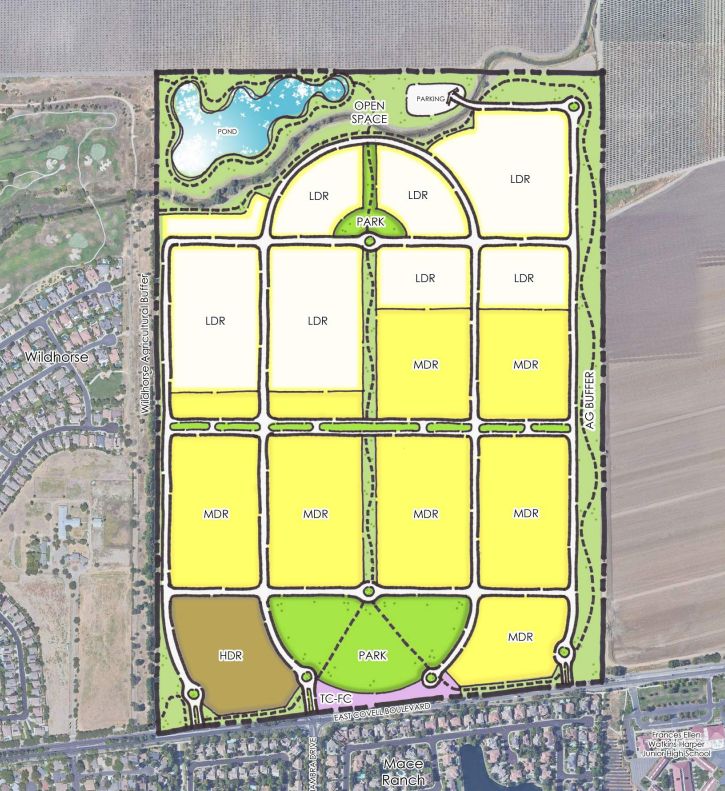 Davis, CA – With the housing crisis facing Davis like much of the rest of the region, housing projects are starting to come forward to help address the housing shortfall.  Last summer, a new project came forward from the Taorminos at Wildhorse Ranch and now, next door at the Shriners property, a new pre-application has been submitted proposing development of that property.

“The purpose of this submittal is to formally begin a dialogue with city staff and decision makers on the development potential of the property. The submittal itself presents preliminary development concepts for a quality new residential neighborhood that provides community building amenities benefitting all Davis residents, while also addressing the City’s critical need for new housing,” wrote Greg Bardini, President of Morton and Pitalo in a pre-application letter dated October 19, 2021.

The proposal calls for the development of a 234-acre parcel located north of Covell to the East of Wildhorse and Wildhorse Ranch.

The submittal explains, “While no longer owned by the Shriners, the property has been commonly referred to as the Shriners property.”

It explains, “The proposed new residential neighborhood would include a range of 1,100 to 1,200 residential units geared toward

families in varying lot sizes and densities on approximately 145 acres.”

The proposal would naturally be subjected to a Measure J vote and, while it could help the city address its housing crunch, it is unlikely to reach the ballot during the next election cycle.

“The primary objectives of this proposal are to create both a new residential neighborhood geared toward families for the City of Davis and new amenities for current residents to enjoy,” the submittal explains.  “Such a new residential neighborhood would contribute substantially to the City’s critical need for more rental and ownership housing at diverse price points.”

The project is aiming to address critical housing needs in the city.

“It is well documented that California is currently experiencing a housing crisis. Davis is no different as the housing supply at all densities and price points is in short supply,” they explain.

“These median home prices have only increased over the intervening six months,” they write.

They add, “This proposal for 1,100 to 1,200 new residential units offers a meaningful contribution to mitigating the City’s dire need for additional housing.”

Included in the proposal is Big “A” affordable “in the form of multi-family rental units consistent with the City’s Affordable Housing Ordinance, that will be affordable to low, very low and extremely low-income households.”

The applicant adds, “An additional 10% of the total units proposed are Price Point homes targeted to sell at an average price of 70% of the City’s median home price.

“While not deed-restricted, these homes will be designed and priced to be more attainable when compared to existing and other new housing stock in the City,” they continue.

Finally, “the proposal includes constructing additional for-sale homes at a more affordable level in collaboration with a housing non-profit builder.”

The applicant also sees an impact on Davis schools.

“The short supply and high cost of housing in Davis have had negative impacts on Davis Joint Unified School District (District). The District finds itself accommodating an unprecedented number of students from outside district boundaries,” they write.

Currently, Davis “has 20% fewer families with children per capita than the average U.S. city.”

They attribute this to the lack of affordable housing in Davis which has led “to the shrinking demographic of families with school-aged children in Davis.

“This ongoing shrinking number of students coming from Davis presents long-term challenges to the fiscal health of the District, as well as the vitality of the entire City,” they write.  “The new for-sale and rental housing proposed will make a meaningful contribution to the City’s housing supply and bring much needed new in-district families with school-aged children to the District and the Davis community.”

The also note that lack of housing has led to a jobs/housing imbalance in Davis.

“The jobs/housing ratio in Davis when including the jobs and residential units at UC Davis is out of balance compared with other cities in the region,” they write. “This negatively impacts the ability of the City to recruit and retain private-sector employers. The project proposal creates opportunities for employees to live in the same town in which they work, thereby helping to attract private-sector employers, reducing commutes of those already working in Davis, and building a more vibrant economy in Davis.”

The timeline for this project is not clear, but it could go on the ballot either in late 2022, or more likely perhaps in 2024.