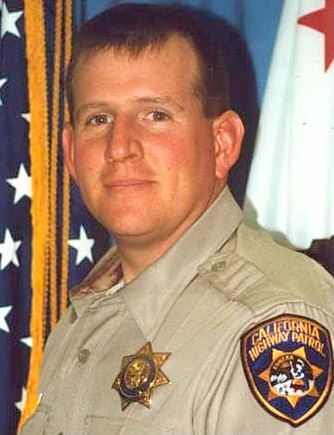 Woodland, CA – Yesterday the Yolo County DA’s office tweeted out, “Today we honor the memory of CHP Patrolman Andrew ‘Andy’ Stevens, who was murdered in the line of duty on 11/17/05, the result of gunfire.”

The murder of Andy Stevens was indeed a tragedy.  Brendt Volarvich was driving down a rural Yolo County road, was pulled over by Stevens, and shot and killed him.

Volarvich was in a fog, as he described in a 2017 letter to the Vanguard.  High on meth and not thinking clearly, “I began to panic,” he said, believing that friends had set him up and that Stevens was somehow not a real cop.

He said, “So I reacted.  I fired once.  And unfortunately I killed him in what I believed was self defense.  It wasn’t until moments later, driving away as fast as I could that I saw no one else lurking, lying in wait to get me, that I realized I just killed an innocent man.  I’ll never forget any of that.”

Volarvich was tried and convicted of murder—as he should have been.

He said, “It was a paranoid/delusional meth fueled bad decision, I took the life of a good man, But I didn’t know what I was doing.”

The problem is that the DA also tried and convicted Greg Zielesch for conspiracy and felony murder.  Under SB 1437, Zielesch could get resentenced when the case finally gets through the Yolo County system.  He would still have the conspiracy charge, but the 57 to life could become a possibility of parole by the end of the decade.

In a July 2017 letter, to the Vanguard, Volarvich said as much: “An innocent man is current(ly) doing life in prison for a crime he didn’t do.  His name is Gregory Zielesch.  That crime is murder of a police officer.  Specifically CHP officer Andy Stevens.”

The prosecution’s theory was that Zielesch had given the gun to Volarvich for the purpose of committing the separate crime to kill Doug Shamberger.  Rebecca Pina testified that she had overheard a conversation in which  Zielesch asked  Volarvich to kill  Shamberger and offered him a gun.

The testimony of  Pina and Lindsey Montgomery, which  Zielesch believes was perjured, was the only piece of information linking  Zielesch to the crime.  During the trial, attorney Stephen Naratil called several witnesses to challenge the credibility of  Pina, but ultimately, after the jury initially hung, they would convict  Zielesch.

The defense had always maintained that the weapon found in the field was indeed his, but believed that  Volarvich “must have taken it without his knowledge.”

In fact, Vollarvich in his letter says exactly that.

He described Becky Pina going to the bathroom in Greg Zielesch’s place.  “Then she came back out.  She had a fanny pack looking bag in her hand.  After looking back over her should to ensure Greg was asleep she said quietly to me and Lindsay “check this out.”  Inside the bag was a resolver.  A .357.  She knew I liked weapons of all sorts.  So she showed it to me.  I wasn’t that impressed.  So she told me that that was the gun Greg kept ‘in case Doug Shamberger came back’ which I took to mean Greg was afraid of Doug.”

Then Pina “took the gun back.  I watched where she put it.  Underneath the sink, there was a kind of shelf space.”

Becky Pina and Brendt Volarvich then had a fight.  At this point, Brendt went to use the bathroom.  He describes, “Inside the bathroom, I remembered the gun.  I knew a guy who would pay me $200.00 or trade me a half ounce of meth for such a gun.  So I put it in my pants down the front.  Then quickly exited the bathroom.”

These are hard cases to disprove.  There is no physical evidence of Zielesch’s involvement.  It was all hearsay and eyewitness testimony.  Pina had reason to hide her involvement because she’s actually the one that supplied the weapon to Zielesch.

There is considerable evidence that the Vanguard has dug up over the years that she benefitted greatly from turning state’s evidence against Zielesch here in the form of reduced and dropped charges in a variety of cases.

What is clear from my ten years of looking at this case, Zielesch should not still be in prison.  The quickest path to his release would be resentencing under SB 1437 and then either wait for parole, or the Yolo DA could utilize 1170(d) for his early release.