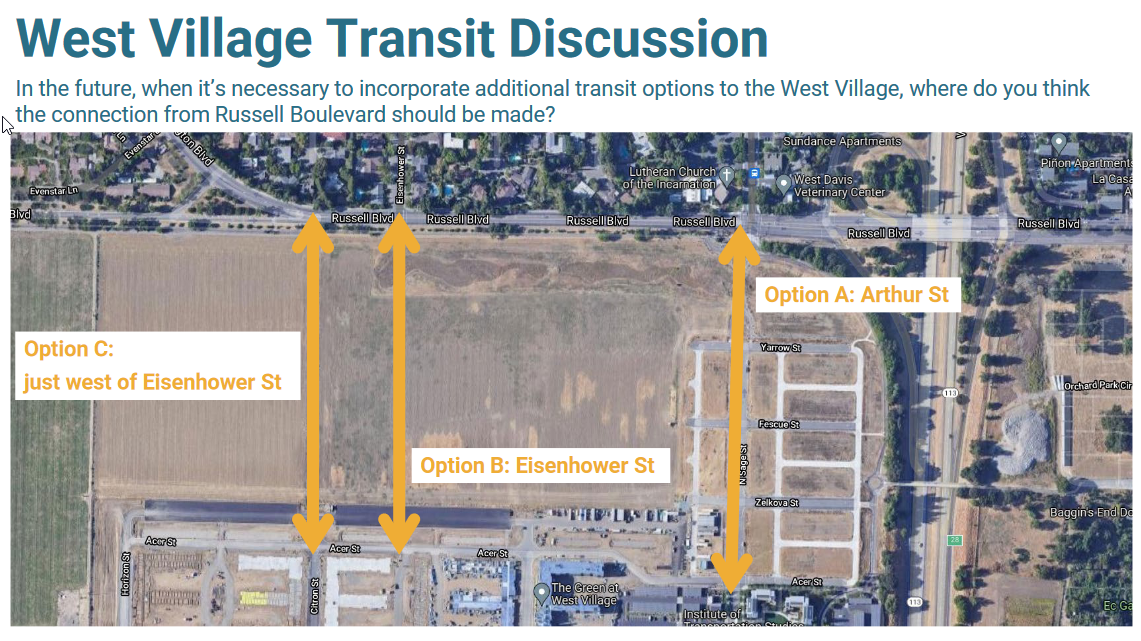 The city and university originally reached an agreement to not allow West Village to have connectivity by automobile through Russell Blvd.  That never made sense – it essentially cut off West Village will eventually have not only student housing, but faculty and staff housing from the rest of the community.

Now should be time to revisit that mistake.

In the staff report, it notes that “In 2018, UC Davis updated their LRDP, stemming from a multi-year planning effort to understand and anticipate the necessary steps to realize the campus of tomorrow.”

As part of the MOU between the city, council and university was a commitment made by UC Davis for $2.3 million in traffic improvement projects.

The city is now working in partnership with UC Davis to conduct “a planning effort for street design, public outreach, landscape and gateway master planning and design, for Russell Boulevard. The Plan is a collaborative planning and conceptual design effort to reimagine the 3.0-mile shared road boundary between the City of Davis and UC Davis from B Street to the City’s western jurisdictional boundary west of Lake Boulevard.”

Part of what they looked at was removal of on-street parking between B St and 113.

During outreach meetings last month, “The overall consensus was a preference towards removal of on-street parking and introducing continuous bicycling facilities shown in Concepts 1 and 2; however, there were some concerns expressed about the impact of displacement of parking.”

They were also asked where they would like to see transit connect to the West Village.  The presentation presented options at Eisenhower, just west of Eisenhower or at Arthur.

Overall, the community that they talked to seemed against the idea of a connection at Eisenhower.

“Most groups noted there are ongoing issues with the development of the West Village in the community, with a history of community protest,” staff notes.

“Participants had many concerns and questions,” staff noted.  Their preference was to discourage connection at Eisenhower, they prefer a “natural connection” which “won’t create additional traffic.”  They are “not opposed to transit connection but it needs to be mitigated.”

“If we block Eisenhower then we have transit exit here,” they said.

To me it never made sense to not have traffic access to West Village.  There is already a lot of the infrastructure needed at Arthur St, you simply connect the roads.  How much traffic would that generate for Russell?  I think we could study it.  But that would definitely help to bring West Village into the overall community and the worries about massive traffic impacts are probably overblown, even with plans for West Village connection.

Even discussing transit options which I assume did not include full traffic access, there seemed to be a good amount of pushback.

In a discussion on NextDoor a few weeks ago, former Mayor Joe Krovoza noted, “One of the worst public meetings ever in the history of Davis was at the Emerson MPR about this issue. UC Davis promised no connection to Russell. I don’t recall any caveat. The public behavior at the meeting was terrible and threatening, and there was a physical assault on a UC Davis staffer, and the campus halted the meeting and John Meyer had his staff leave. That was the right call. I attended to speak and was so intimidated that I stayed back and kept quiet. I certainly hope nothing like that happens again. It was unbecoming a community like Davis.”

The overall reaction was somewhat mixed with many stating that they are opposed to this.

Others noted, “I think that there should be connections. It would benefit the West Davis community to not force all traffic onto Russell.”

But the reality is that right now, everyone is forced either onto the highway or to come onto Russell at Anderson and LaRue.

Providing another access point might have only minor impacts on overall traffic.  However, given the history of the contentiousness from a little over a decade ago, neither side may be eager to revisit it.  Nevertheless, it seems like bad planning and probably bad for VMT and GHG.

As one person put it, “An environmental assessment report will be able to determine the need and effect of a road on to Russell to existing neighbors. Especially increased traffic, noise, and impact on surrounding area.”

Seems like that might be a good start for a discussion – but in the end, panicked voices are likely to prevail.

47 thoughts on “Commentary: Should the City Re-Think the West Village Connection?”