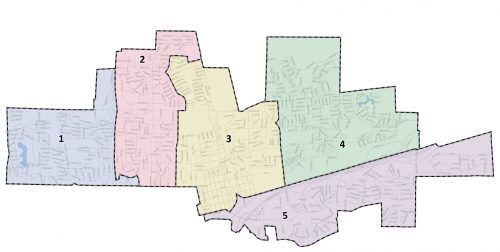 DAVIS – On Nov. 2, 2021, the Davis City Council met to discuss its redistricting process.

The goal of this meeting was to set a foundation and become aware of the redistricting parameters and guidelines. This is the first of five hearings that will be held to discuss the redistricting

Stitt began by stating that redistricting is, “the act of equalizing population among districts.”

It is intended to create a balance of population in each city district. This is an important task because it allows equal representation to be achieved through the 14th Amendment. Residents can advocate for themselves and their needs, such as city safety.

This also accounts for the “one person one vote” law where every resident has a chance to elect a candidate of their choice so that the rebalancing lines can be fair.

It is important to note that over the years, redistricting processes have evolved into having transparency and open redistricting, meaning there is more encouragement for community participation.

The Fair Maps Act is extra criteria that must be met by the city of Davis, so no political disadvantages are present. It allows for increased transparency of the redistricting process and encourages the public to get more involved since the city drafts will reflect residents’ concerns and opinions.

To allow further involvement of the public, Stachowicz presented an online mapping tool to demonstrate redistricting preferences to each resident. A resident can plot out their mapping preferences and be provided with a visual representation of the layout. There was an intention to host a workshop this week however the tutorial is not ready to be launched. The city will release information regarding the workshop and tutorial on their city page dedicated to the redistricting process.

She explained that section two is the majority minority districts and “if there is a citizen voting age population of 50 percent or more of a protected class under the Federal Voting Rights Act … and there is racialized polarized voting then they would be protected under section 2.” This section would allow legal action to be taken in order to protect those voices. Section five has been effectively deemed inactive due to Shelby v Holder in 2013 but was used to preclear the maps with the federal government.

When it comes to redistricting, there are five main redistricting principles that need to be met to prevent gerrymandering. They are: having a relative size district based on population, maintaining a contiguous district, keeping “communities of interest” intact, following designated boundaries provided by census and city, and keeping districts compact by not passing a nearby population for one farther away; meaning that the nearby population of the district should not be neglected for a population that is distant from the district.

The current district lines are based on data collected in the 2010 census. The redistricting process will analyze data collected in 2020 and may represent the absence of students due to COVID-19 by having a loss of population in some districts.

Stitt indicated that the goal in the redistricting process is to keep the deviation of population under 10 percent however, it is currently at 26 percent. Based on this high deviation, adjustment is necessary to keep the districts balanced.

The next redistricting hearing will be held on Dec. 7, 2021, where the city will continue to receive public input and community participation in order to produce a pre-draft map.

Share:
Tags:Redistricting
Previous : Even the Attorney General Getting Into Act on Housing Crisis – Bonta Launches Housing Strike Force
Next : Commentary: In the Long View of Justice, Tuesday Was Not a Setback But Another Turn in the Track

Jordan Varney received a masters from UC Davis in Psychology and a B.S. in Computer Science from Harvey Mudd. Varney is co-editor in chief of the Vanguard at UC Davis.

One thought on “Davis City Council Prepares for Redistricting”