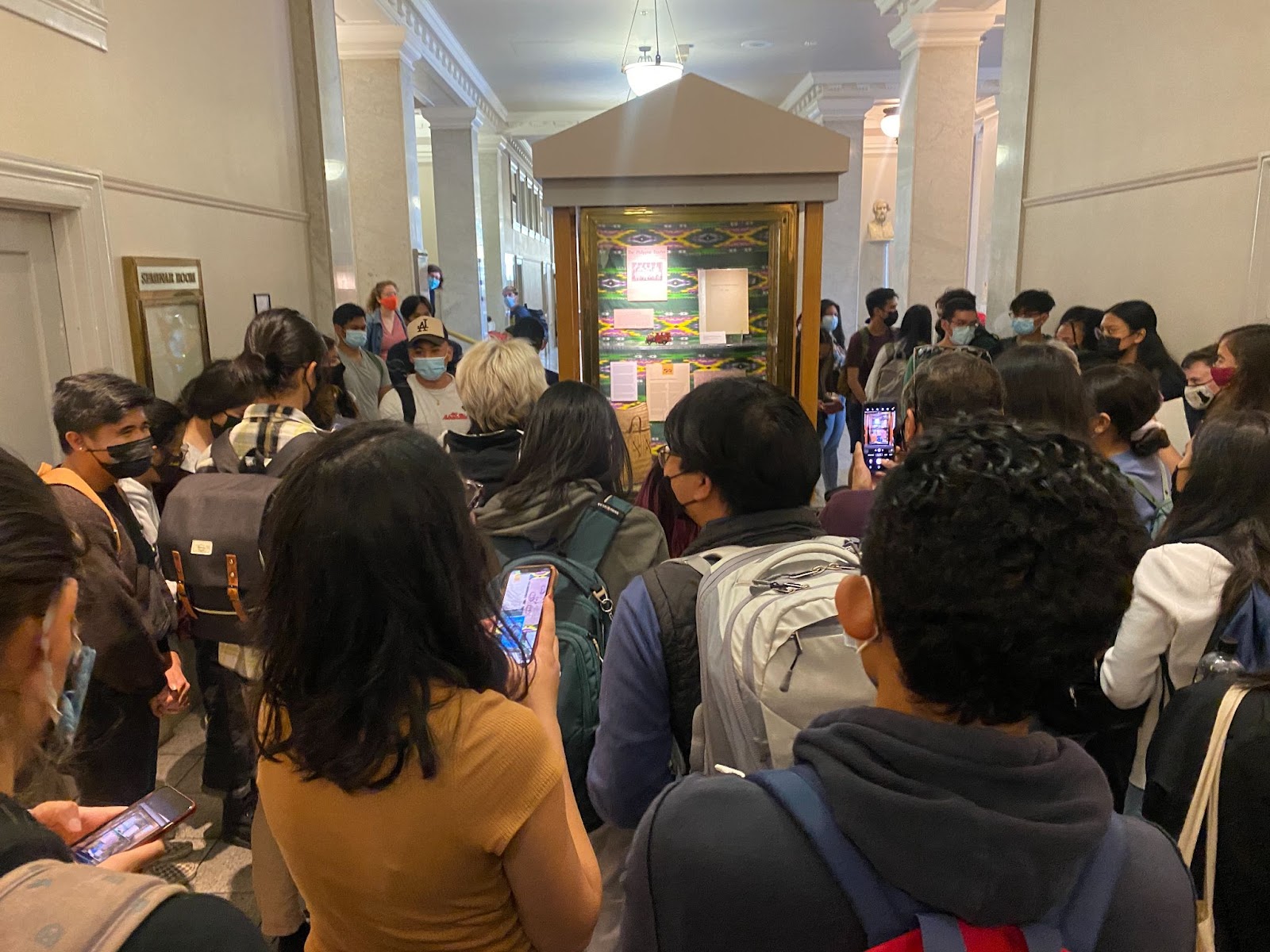 BERKELEY, CA– On Thursday, October 28, Filipinx students and faculty at UC Berkeley organized a rally on the steps of Doe Library, condemning the library’s display for its celebration of colonialists and racists. These speakers demanded proper representation of their scholars, community, and history.

The display is titled ‘Celebrating 50 Years of Excellence: South and SouthEast Asia Studies Scholarship and Stewardship at Berkeley,’ and highlights the work of those such as David Prescott Barrows, Alfred Louis Kroeber, and Bernard Moses.

One speaker, Alex Mabanta, a graduate student at Cal, explained why the display’s celebration of Barrows’ work is condemnable, noting that “The display on the Philippines features the book ‘A History of the Phillippines’ by David Prescott Barrows. First published in 1905, the book is a history textbook for high school students that was used in schools in the Philippines until 1924 which claimed that Filipinos possessed ‘an intrinsic inability for self-governance’ and were ‘an illiterate and ignorant class’ to be brought into modernity through the benevolence of American rule.”

“I want you to imagine the consequences of history. An entire generation of youth in the Philippines were taught to believe they could not read and could not lead,” Mabanta stated.

Mabanta continued, explaining who Barrows was in order to contextualize his role in the colonization of the Philippines, “David Prescott Barrows was general superintendent of education of the Philippines from 1903 to 1909 during the American colonial period before transitioning to become a faculty member here at UC Berkeley from 1910 to 1942 and UC president from 1919 to 1923.”

In the past year, UC Berkeley has renamed buildings such as Barrows Hall and Kroeber Hall as their namesakes perpetuated and uplifted views of white supremacy in their lifetimes. The speakers at the rally pointed out that the display is in direct opposition to the goals of the renaming of campus buildings. They also emphasized the timing of the display during Filipino American History Month as particularly disrespectful, as the library chose to celebrate those who participated in the oppression of Filipinx people while having almost no representation for Filipinx scholars or communities.

At the rally, students held signs with phrases such as, “Decolonize Our History,” “Imperyalismo, Ibagsak,” which is an anti-imperialist phrase in Tagalog, and “Take Back Our Education,” all of which represent the opinions and reactions to the library’s display from the UC Berkeley Filipinx community. At the end of the October 28 event, the rally’s attendants walked inside Doe Library to look at the display and see for themselves the names and works of Barrows, Kroeber, Moses, and others.

Activism surrounding the display has extended to the ASUC. Senator Stephanie Wong stated the list of demands by Filipinx students: amending the display in a way that Filipinx students and faculty see fit, representing Filipinx in a way that they would like to be represented and uplifting their authentic narratives, building and securing long term programs such as a resource center, language center, and Filipinx study program, and celebrating the Filipinx community genuinely by formally recognizing October as Filipino American History Month.

Last week, the ASUC unanimously passed a resolution as a response to the display. The resolution is “a piece of legislation which condemns the white colonial gaze with which this institution views its Pilipinx students and its students of color” Wong stated.

As of the writing of this article, no action has been taken by the library to change the display and contextualize the work and beliefs of the colonialists centered in the display.

UPDATE: The display has been taken down. It is unclear if it was taken down due to the protest or because it’s a new month.

The Cal Pilipinx American Alumni Chapter asks those who support their call to change and contextualize the display to sign a petition, linked here.

Diana Ochoa writes for the Vanguard at Berkeley's Social Justice news desk. She is a UC Berkeley student studying Political Science and Public Policy. She is originally from Southern California.