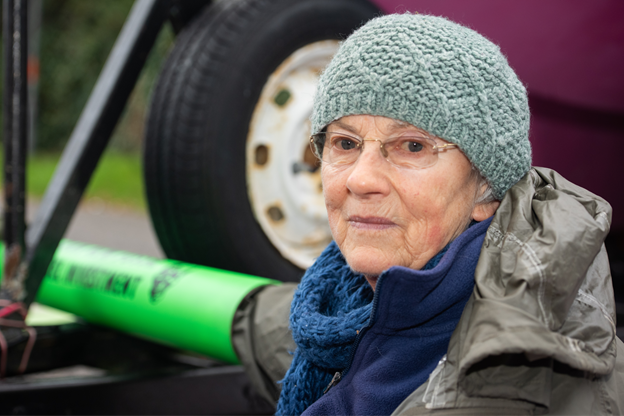 Wales, United Kingdom. — As she scampered down a rain-slicked, grassy hill to ford a gurgling stream in Devon, England, Mary Light, my husband’s 76-year-old aunt, explained why she was preparing to be arrested for the fourth time in recent years. She said with dignity, “I have grandchildren.”

Our family of four has returned to live for a year in Wales where our daughter Sumaya is attending the same public school — King Henry VIII — where her great-grandfather attended, and where we are re-connecting with Mary, one of millions of people of all ages taking direct action worldwide in defense of humanity,

nature, and future generations–in defense of a livable future.

My husband, Nick Buxton, and I are also here to attend the hybrid in-person and online, COP26 People’s Summit, a week of action, education, and strategizing on ways to rapidly and justly transition off fossil fuels, recognizing the particular responsibility of industrialized countries such as the United States, which has contributed nearly 40 percent of historical greenhouse gas emissions. A Global Day of Action for Climate Justice is planned for Saturday, November 6.

The purpose of COP26, also called the United Nations Climate Change Conference, held this year from October 31st to November 12, in Glasgow, Scotland, is to “bring parties together to accelerate action towards the goals of the Paris Agreement and the UN Framework Convention on Climate Change.” World leaders and climate negotiators are meeting in the Glasgow Events Campus to hammer out a plan to address what the UN has called a “Code Red” climate emergency and to hold global temperature rise to below 1.5 degrees Celsius. 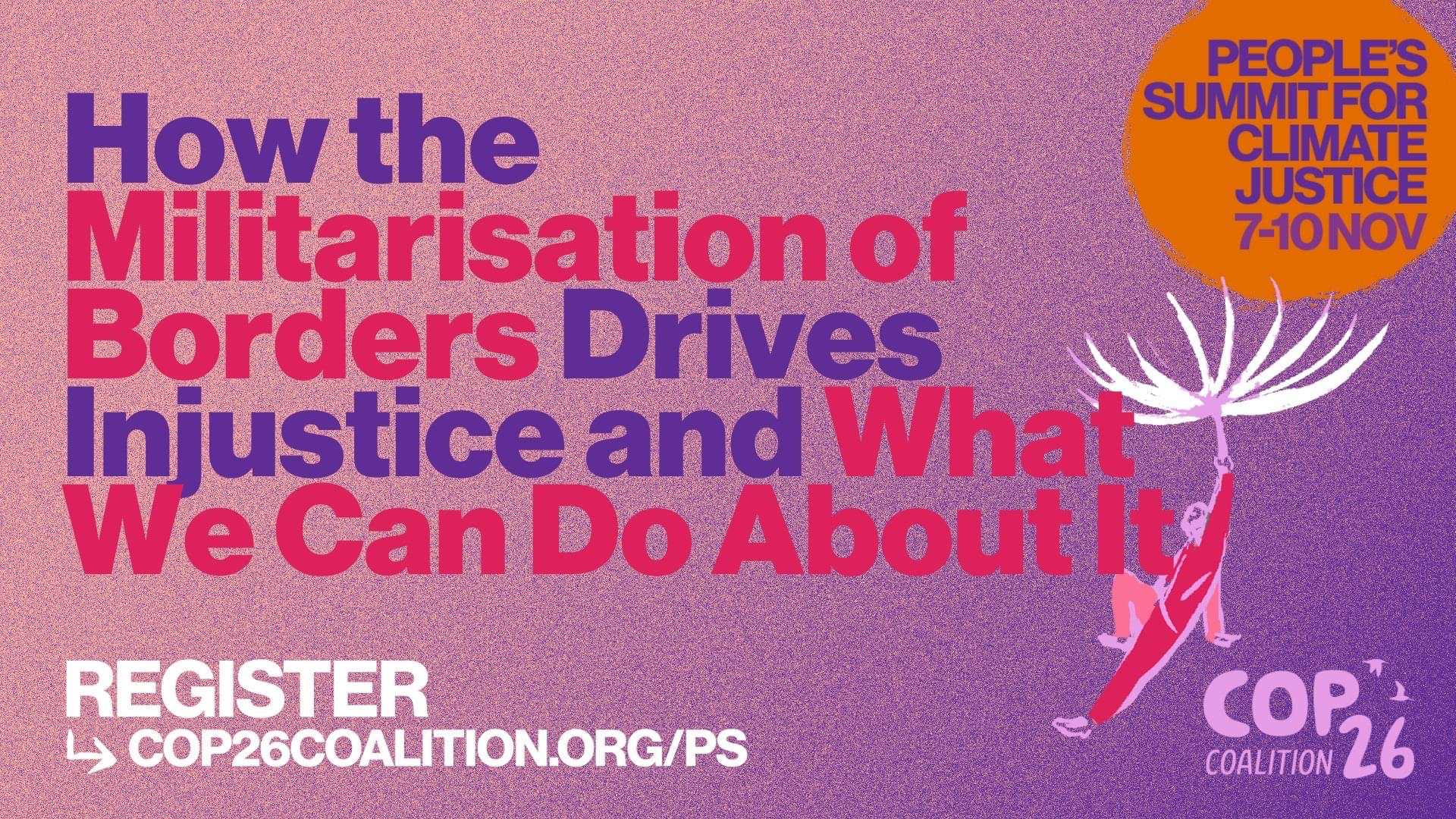 On November 8, Nick will be contributing to a People’s Summit digital event titled: Climate Walls – How Militarism of Borders Drives Injustice and What We Can Do About It,” with some stark findings from the Global Climate Wall report that shows how rich countries are disturbingly spending more militarising their borders than providing climate finance to the poorest countries.

Register for “Climate Walls – How Militarism of Borders Drives Injustice and What We Can Do About It” with contributor Nick Buxton and many more.

A lifetime of family activism

Nick attended the COP15 summit in Copenhagen in 2009 with the Bolivian government delegation. He and I had moved to Bolivia in 2006 to learn from social movements in this proud, predominantly indigenous country at the heart of the South American continent. This is where we met. Nick had been active in the Jubilee debt cancellation movement across Europe in the late 1990s while I was organizing in California for fair trade and local investment policies.

We moved to Davis to be close to my family for the birth of our first child. When Sumaya was two, we returned to Bolivia for the historic World’s People Conference on the “Rights of Nature and Climate Change.”

In 2009, Nick and I joined a march in the UK, similar to the one held last week by Extinction Rebellion, protesting the Kingsnorth coal-fired power plant with my pregnant belly displaying a “For My Future” message.

Last June, Mary supported her daughter Joanna and grandsons Fin (age 12) and Arlo (age 9) as they participated in a 60-mile march organized by Extinction Rebellion to demand that G-7 leaders meeting in Cornwall take bold, systemic action to prevent ecological collapse (G-7 is a summit of seven of the world’s most powerful countries including the US). Our family of four was involved in the planning of the Davis Youth Climate Strike in Davis in 2019, just before the pandemic hit.

Nick and I are grateful for the community that has nurtured our young family and are honored to call Davis our permanent home. We are proud to come from a place where both the city and county have declared a climate emergency. Acting “in alignment with the city’s values,” in 2017, the Davis city council voted 5-0 to divest its $125 million financial services portfolio from Wells Fargo bank in solidarity with the oil pipeline protests at Standing Rock.

Currently,  The City of Davis and Yolo County are drafting updates to their Climate Action Plans. The public is encouraged to submit comments on the City of Davis’ proposed climate actions and participate in a Nov. 10 community workshop.

With over $250 million in Federal American Recovery Plan funding flowing to our region to help the communities most impacted by the pandemic, with $19.7 million set aside for Davis, this is a good time to check in on how we as a community are responding to the converging environmental, racial, health and economic crises and whether we are addressing historic inequalities that are also being worsened by climate breakdown.

Are marginalized community members well represented in the process of distributing these funds? Are the projects truly transformative projects? Are we taking into account the disproportionate impacts of a rapidly destabilizing climate on historically marginalized communities including people of color, youth and women? Whose voices are we listening to; whose voices are being left out? To whom are we accountable?

Please share your response to these critical questions and your vision for a just transition to a decarbonized economy using the #yoloclimate hashtag. As COP26 unfolds, I will be posting news updates from Glasgow on social media to amplify the voices and solutions from frontline community members most impacted by climate chaos.

The Seeds of Justice learning community  started this fall by the Episcopal Church of St. Martin in partnership with Yolo Interfaith Climate Justice Alliance and Yolo Climate Emergency Coalition is also a space to explore our collective response to the questions: what is our responsibility as people who live, work, or worship in Davis to the original inhabitants of this land? What is the legacy of environmental racism in this region? How can we heal and repair the harm?

We would be wise to respect the Indigneous-led movements that are carrying out the work of the Cochabamba Declaration to guide humanity out of this existential climate and nature crisis.

Demanding real carbon solutions in the UK and US

Last week in Washington, D.C., led by Indigenous water protectors, activists, and tribal leaders from across the country, hundreds of people took part in a protest at the White House to demand that President Biden stop fossil fuel projects that are threatening Native communities from Appalachia to Alaska.

This week, Mary will link arms in an act of peaceful civil resistance with hundreds of Insulate Britain activists to disrupt motor vehicle traffic in London. The group has been pressuring the host UK government leading up to and now during COP26 to come to the table with real commitments to cut carbon emissions and address fuel poverty by funding a program to insulate leaky homes nationwide, starting with social housing.

As I said good-bye to Mary and wished her well for her upcoming action in which she would be locking her hands inside a plastic tube to another activist, I asked if she was scared.

She said, “No, I’m not scared. I’m grateful to be able to respond to this horrendous situation with meaningful action. We know from history — the suffragettes, Martin Luther King and the Civil Rights Movement – that disruption works.”

Yes, Mary, I responded, “You’re in good hands, the hands of the movement.”

— Juliette Beck is a lifelong climate justice activist. This article is the first in a series. Juliette will be submitting reports from Glasgow to our Davis community over the course of the two-week conference and summit. Follow local COP26 coverage at Climate Strike Davis Instagram, Juliette Beck FB and Twitter @juliettegaia and @nickbuxton. Contribute your climate justice news at #yoloclimate.

Juliette Beck is a Davis resident and climate activist