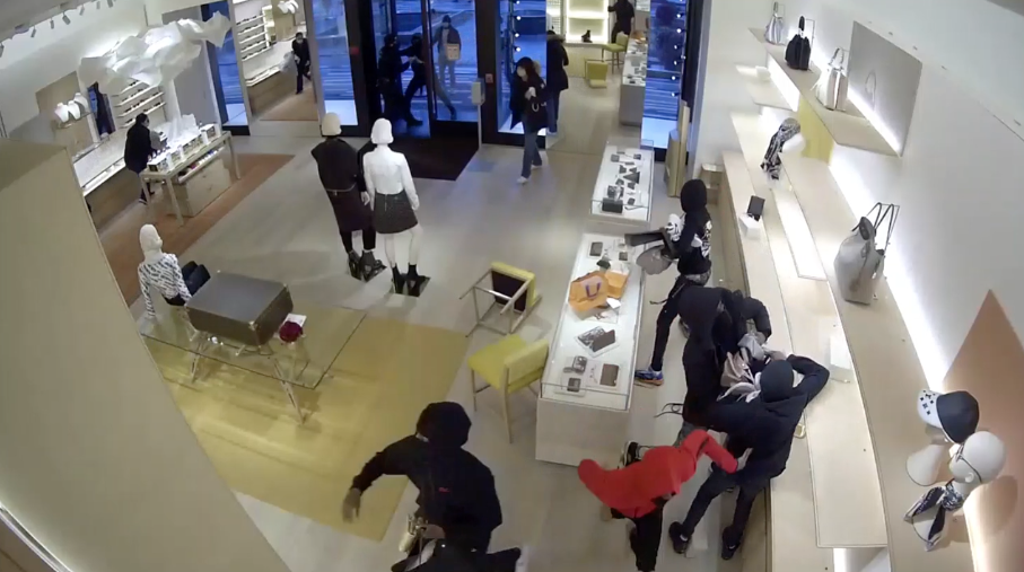 Woodland, CA – An incident that happened prior to Thanksgiving in Walnut Creek where a reported 80 people storm into a Nordstrom’s and stole merchandise has caught everyone’s attention.  On Black Friday there were numerous smash and grab thefts reported in California and elsewhere.

Is there a real phenomenon or is the media simply fueling a panic with little data or perspective to guide the public?

Last week, the Yolo County DA’s office put out a statement on smash-and-grab thefts – which is particularly notable since there has not been any in Yolo County.

“In response to a significant increase in the number of smash and grab thefts occurring across California, Yolo County Law Enforcement wishes to ensure the community that law enforcement is prepared to respond to Yolo County businesses or individuals being targeted,” said the DA’s office in a statement.

According to their account “numerous stores and shopping malls” across northern and southern California “have been victimized by large groups of thieves acting in concert, causing many businesses to board up their windows.”

“While Yolo County has not yet experienced similar crimes, law enforcement remains prepared to respond in the event our community experiences such crime,” the DA’s office continued. “The recency and growing frequency of these thefts is especially concerning with the holiday season now here.”

Sheriff Tom Lopez said, “Public safety is our top priority. In the event that thieves target Yolo County businesses as we have witnessed in other parts of California, we are prepared to collaborate together with all of our allied agencies across Yolo County to investigate and arrest those involved.”

Meanwhile DA Jeff Reisig assured the public “those arrested will be held accountable.”

He said, “Large scale theft crimes are detrimental to our community and we will continue to hold those who threaten the safety of our community accountable for their crimes, especially if violence is involved.”

But part of the problem is that these types of incidents are difficult to catch.  For example, despite the fact that the Nordstrom’s theft was caught on video and people were in the store, only three of the 80 people involved were caught.

Last Tuesday, the San Francisco DA’s office reported the arrest of nine of the people who broke into a Louis Vuitton store, along with other Union Square retailers.  About 20 to 40 people were estimated to be involved – they smashed windows and grabbed merchandise on display.  The nine were all charged with multiple felonies.

As a result, Boudin and the other DA’s in the Bay Area are forming a task force.

But is this a real problem or is it just something gaining attention because of the brazen nature of the thefts?

When we looked at media coverage over the last week – it was the same stories over and over again.  CNN noted 18 people who broke into a Nordstrom in LA a week ago.  There was also a similar theft in suburban Chicago where $100,000 in handbags and other merchandise were taken from another Louis Vutton.

The Hill yesterday likewise cited the LA incident along with one in Lakewood California and in Monterey, where $30,000 worth of sunglasses were taken by four people.

CNN asks, “So why so many recent incidents? Are they linked to the holiday season? Is it pandemic restlessness?”

They never bother to ask, are we really seeing a large number or it is just a few high profile incidents?

“This has nothing to do with the pandemic,” said Pete Eliadis, a former law enforcement official and founder of security company Intelligence Consulting Partners. “The pandemic is overused at this point.”

Evidence cited to support this claim?  None.

He blames, “defund the police” which has long since disappeared from anyone’s radar other than a few initiatives that police themselves support.

“The takeaway is we need the political will, more prosecution and backing of law enforcement.”

But that isn’t what we have seen this week?  Instead, we have seen press conferences and the rapid formation of task forces to deal with these kinds of threats.

It then shifts the blame to Prop 47 in California which raises the threshold for felony theft from $500 to $950.

“For the low-level criminal, the benefit far outweighs the risk, since the threshold for a misdemeanor offense is $950 — meaning that a person can steal up to that amount and only be charged with a misdemeanor,” Buel said.

There are also sorts of problems with this claim which CNN never teases out.

First of all, making a penalty a misdemeanor rather than a felony is not decriminalizing it.

Second, for some reason people continue to cite the $950 threshold out of context.  California is hardly the most liberal state in this regard, in fact, in Texas the threshold for a felony is $2500 not $950.

Buel told CNN, “Organized crime rings are often behind these types of “smash-and-grab” operations and pay low-level criminals to steal for them.”

“People see the ability to commit these ‘smash-and-grab incidents’ knowing that there is little consequence, especially if the thefts are kept below the threshold of a felony offense,” Buel said. “It’s easy, it’s fast, and the payback is good.”

But there are two other problems here.

Third is that in most of the highlighted cases, the amount stolen far exceeded felony thresholds.

And fourth, when people have been caught, such as in San Francisco, they are facing multiple felonies and probably years in prison.

One problem that has gone under-reported – it is hard to stop property crime.  When the Vanguard interviewed Chesa Boudin the SF DA a few weeks ago, he cited data showing that his office prosecuted about 80 percent of retail theft cases that came to them – their problem, only about three percent of such theft cases ever get to them, because police are unable to make arrests.

If thieves do not have a reasonable fear of being caught, it doesn’t matter what the penalty is.

But none of this suggests that there is an actual problem.  CNN reports for example, “It’s not unusual for “smash and grabs” to increase around the Christmas holiday season, Buel said.”

So are we actually seeing something unusual here or is the media just jumping on a narrative without a lot of context… again?

26 thoughts on “Monday Morning Thoughts: Yolo Officials Are Ready For Smash and Grabs – But Is It Actually a Threat?”