SAN FRANCISCO, CA – Civil rights attorney and executive director of Zealous, Scott Hechinger, went to Twitter to discuss the recent Walgreens shoplifting exodus, and why it may not be the fault of San Francisco District Attorney Chesa Boudin’s that it is happening.

He posted, “Buried in all this misleading information over shoplifting & Walgreens & fear is this: People who shoplift are stealing to survive. Suffering from substance abuse, poverty, houselessness, hunger, mental health, arrests & cages exacerbates all those issues.”

In another Tweet, Hechinger wrote, “Retail theft in particular is down almost 40 percent since YTD in 2018, a huge drop not plausibly explained by ‘ lack of reporting’.”

In June, a video shot in a San Francisco Walgreens went viral that showed a shoplifter filling a garbage bag with items from the drug store’s shelves, and then leaving the store on a bicycle. The suspected shoplifter was arrested, but the episode continues to reverberate.

Shoplifting has emerged as a hot-button issue in the Bay Area, and beyond. Retail theft is now said to be responsible for $45 billion in annual losses in the U.S., according to one trade association. 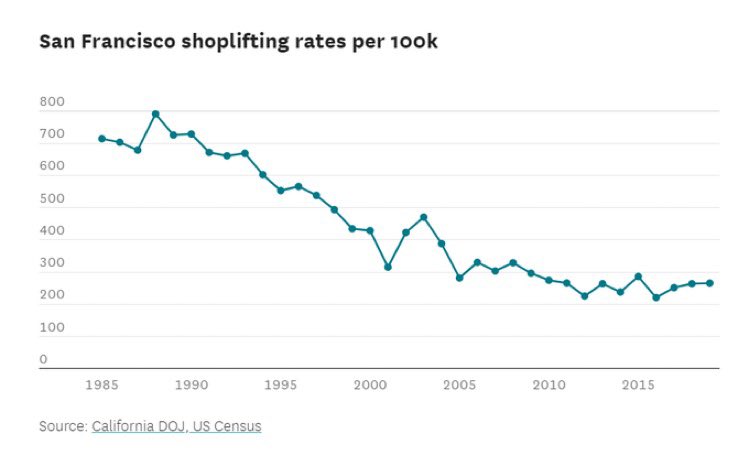 Walgreens has blamed organized shoplifting rings for the company’s recent decision to close five out of the 53 Walgreen stores in San Francisco.

The announcement put Walgreens at the center of one of the city’s most acrimonious debates. What started with closure of a small handful of chain drug stores in the city drew national media attention, fueled by increasingly bitter fights over how San Francisco prosecutes crime.

Mayor London Breed told reporters, “They [Walgreens] are saying shoplifting is the primary reason, but I also think when a place is not generating revenue, and when they’re saturated – S.F. has a lot of Walgreens locations all over the city – so I do think that there are other factors that come into play.”

Data that was released by the San Francisco Police Department does not support the explanation announced by Walgreens that it is closing five stores because of organized, rampant retail theft.

One of the stores that is set to close, located on Ocean Avenue, had only seven reported shoplifting incidents this year and a total of 23 incidents since 2018, the data showed.

Four years ago Walgreens told shareholders it planned on closing 600 stores nationwide. It wound up closing 769 in 2019.

The Illinois company said in the U.S. Security and Exchange commission filing that it would shutter 200 stores, or fewer than three percent of its 10,000 locations in the U.S. One of several cost saving measures projected to save $1.5 billion in annual expenses by 2022, according to the filings.

The SF Chronicle reported that crime “in Boudin’s first year of office, overall reports of crime in San Francisco fell 23 percent compared with 2019, driven largely by a pandemic drop-off in opportunistic thefts such as auto break-ins. Reported robberies dropped 23 percent, assaults 14 percent and rape 45 percent. This year, overall crime reports are essentially flat- down an additional one percent through early August.”

SFGate reported that San Francisco ranks low in total criminal incidents when compared to other major cities, with a 19.6 percent decrease. Violent crime has steadily decreased and is consistently down overall from previous years.

Adam Johnson wrote an article in the Column about Walgreens shoplifting, noting, “Even if one thinks that ‘something needs to be done’ about the ‘shoplifting epidemic,’ one also must concede that this story is very much about the internal business economics of a single retail drug store.”

According to Bloomberg News, “shoplifting is a centuries old crime that’s been tied up in American anxieties about youthful rebellion, mental illness, urban disorder, and economic inequality.

“Shoplifting has been a sin, a crime, a confession of sexual repression, a howl of grief, a political yelp, a sign of depression, a badge of identity, and a back door to the American Dream,” said the Bloomberg writer, adding that “the act mirrors our collective identity, reflects our shifting moral code, and demonstrates the power that consumption holds over our psyches.”

3 thoughts on “Police, Other Data Show There May Be More to Shopliftings, Walgreens’ Exodus in San Francisco”