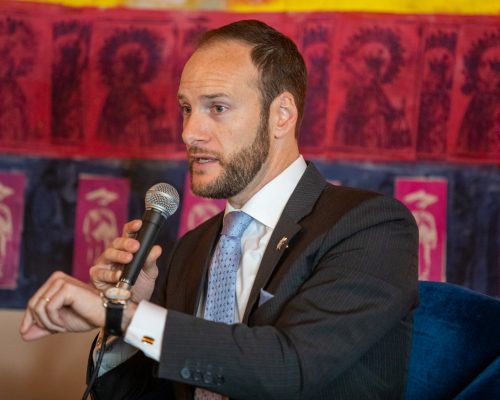 SAN FRANCISCO— When Chesa Boudin was elected to the position of San Francisco District Attorney in November of 2019, he expressed great hope for the office’s potential to transform the criminal legal system: “The people of San Francisco have sent a powerful and clear message … It’s time for radical change to how we envision justice. I’m humbled to be a part of this movement that is unwavering in its demand for transformation.”

While this commitment to “radical change” is precisely what drove San Franciscans to elect Boudin, approximately two years later, it is also what is fueling a potential recall election for the DA.

“Well, I think it was probably inevitable that he would be contentious because although the idea of progressive prosecutors has been circulating now for about a decade—and indeed, Vice President Kamala Harris in some ways was one of the country’s sort of premier political figures who sort of stylized herself that way—I don’t think perhaps we’ve ever had a prosecutor as committed to essentially challenging the basic commitments of the criminal legal system to its belief and aggressive use of incarceration and punishment” Simon said.

With the recall campaign submitting over 30,000 more signatures for support than the required minimum of 51,325, Boudin is likely to face a recall election sometime next year.

Supporters of the recall—which has received significant funding from the San Rafael-based political group Neighbors for a Better San Francisco—say that Boudin has been too lenient in his sentencing of criminal defendants, leading to an uptick of crime in the city.

These claims have been echoed by prosecutors who have quit their jobs in the DA’s office in past weeks, namely Brooke Jenkins and Don Du Bain. Jenkins says that “Chesa has a radical approach that involves not charging crime in the first place and simply releasing individuals with no rehabilitation and putting them in positions where they are simply more likely to re-offend.”

Boudin and other opponents of the recall efforts, however, maintain that such claims are inaccurate and politically motivated.

While it is true that burglaries and vehicle thefts in San Francisco have increased since Boudin took office, homicides have remained relatively flat and violent crimes (including robberies, rapes, and assaults) have largely decreased.

Simon outlines how the misleading perception that crime has exploded under Boudin’s leadership arises from a variety of factors: “One is that first of all, homicides have been up around the country. And while they may not be particularly high in San Francisco, people’s sense of where crime is happening is inevitably blurry because of the way our media is imprecise about where crime is happening.”

A second factor identified by Simon is people’s understanding of the threat that crimes such as burglaries and vehicle thefts pose to society. He says that “Auto burglary and even auto theft are relatively tolerable forms of crime. Mostly, they inconvenience us if we own a car and windows are broken, that’s really upsetting and annoying. But usually we can fix that for a couple of hundred dollars, which if you own a car, is probably not beyond your means. And even if your car is stolen, usually you have insurance for it.”

He further elaborates that “Right now, I think crimes like auto burglary and even retail theft/shoplifting have become sort of moral panics because they symbolize to a lot of people, they capture the sense that there’s a loss of basic social consensus about how to behave and that somehow the failure to punish these crimes or to enforce the law against people who commit them is somehow contributing to that.

“This is a very familiar pattern in history that we see people reacting that way—finding crimes in kind of a convenient place to articulate their broader concerns about the things that are going wrong with the political system.”

As documented by the United Nations Office on Drugs and Crime, such increases in property crime could be attributable to the economic insecurity wrought by the coronavirus pandemic. In a recent research brief, the office noted that “As observed in the past, economic crises increase unemployment and have a greater impact on vulnerable groups, thus putting additional stressors on people and limiting their opportunities for financial stability, which may in turn trigger a spike in property crime in the later stages of the COVID19 pandemic or even after its conclusion.”

Boudin’s current term as District Attorney ends in 2024. If he survives the recall efforts, this means that he will have at least two years to continue seeking his goal of transforming the criminal legal system, which is largely inspired by Boudin’s own experiences involving the incarceration of his parents.

As explained by Simon, “The impact on children and the next generation of the sort of over-incarceration since the 70s is one of the most important sort of features of the mass imprisonment story. And so the fact that he [Boudin] kind of embodies that and has tried to bring that into his leadership of the DA’s office is, you know, really makes him a kind of unique figure.

“And I think assuming he does and I’m pretty confident he will survive this, I look forward to it because of that in part. He really is a unique figure in helping the country define the values that it wants to see replace mass imprisonment.”