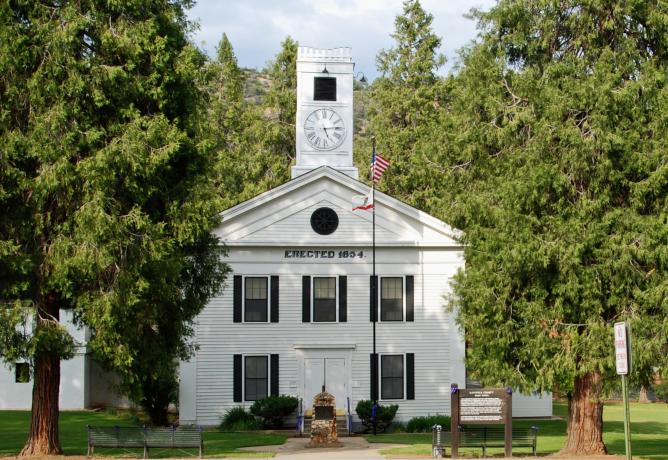 Image from Superior Court of California, County of Mariposa

MARIPOSA, CA— Mariposa father *”D—-” was arrested on charges of performing sexual acts on a minor in January earlier this year, and this week a hearing was held in Mariposa regarding the removal of D—-‘s ex-wife from the restraining order because she said she’s open to communication with him.

*NOTE: To protect the identity of minors, The Vanguard is not disclosing the real names of the family members, including the accused.)

D—-’s charges include willfully committing a lewd act with a child under the age of 14 with the intent of arousing the child or gratifying sexual desires, as well as a subsection of this penal code that applies specifically to an offender than is at least 10 years older than the child.

D—-‘s third charge is communication with a known minor with the intent to commit a crime, and his final count for the annoyance or molestation of a child under 18 years of age.

The hearing began with private defense attorney Martin Taleisnik stating that, to his knowledge, the family of D—- was seeking to modify the order in his probationary contract that prohibits him from having contact with them.

As of the hearing, the order in D—-‘s probationary contract restricts D—- from having contact with the victim and their family.

Taleisnik continued, specifying that he believes that *”JANE,” D—-‘s ex-wife with whom he shares two sons, was seeking “peaceful contact.” The attorney stated that the proposed order does not mention anything regarding D—-‘s daughters, whose restraining order would remain in full effect.

Deputy District Attorney Walter Wall then stepped in and explained his understanding of the situation. First, he stated that the court had previously heard this issue and referred it to family court. Family court proceedings on this matter never advanced, though.

DDA Wall was under the impression that there would be an arrangement, through some facilitation, between D—- and J—- for him to see “the two minor boys that (D—-) is the father of.”

J—- then spoke. She specified that she “wasn’t seeking anything in this situation, but I am willing to be open to communication regarding our sons and possible visitation.”

Following J—-‘s assertion, Judge Michael Fagalde stated he will reaffirm the court’s previous order on the matter. He remains confident that family court is better equipped to handle such circumstances.

Judge Fagalde said either party could request a visitation situation, and the family court would have full liberty to modify the no-contact order. He also asked that the clerk put a copy of the proceedings of the ongoing hearing into their family court file, attempting to advance this dissolution matter.

The judge justified his decision regarding the content of the order, stating that “I think the family court is in the best position, they have more resources than the criminal court does to determine what’s in the best interest of the boys….” He then restated that their best interest is of utmost importance in this case.

Wall then asked the judge to turn his attention to another matter, asking for further clarification on specific details of the restraining order. He and J—- were confused about whether or not she was included in this order.

Judge Fagalde then confirmed the order contains “victims and family,” implying that she would be included in that.

Taleisnik then stepped in, stating that they had previously discussed this specific issue in court and concluded that it should be left for the family court to handle.

However, the attorney explained that he was under the impression that D—-‘s family had requested that he be allowed contact with his ex-wife “and the boys.” Furthermore, they believed D—- could “help out quite a bit in other ways aside from just financial support.”

Taleisnik then confirmed with Judge Fagalde that if the family court granted permission on this matter, “nothing” from the criminal courts would prevent him from having such contact.

The judge affirmed this statement. He explained that due to the nature of this crime, he firmly believes that the family court is a better medium for this discussion.

The judge then addressed J—-, saying “the order essentially is no contact. Is that still what you requested, ma’am?”

J—- responded, “My understanding was that after the last court date …. the stipulation changed from victims and family to just minor children. My understanding this whole time is that I was not included in that…I am open to contact at this point if it’s best moving forward with family law and other issues that we might need to discuss.”

Following this revelation, Judge Fagalde stated he would modify the probation order, striking the term “and family;” therefore, there would still be no contact with the minor victims permitted.

Fagalde clarified that modified probation to contact J—- does not authorize visits with the sons. If such is desired, it still must be a separate discussion within the family court. Even if J—- thinks that the defendant should or can contact his sons, he cannot do so until family court permits.

Share:
Tags:Child Molestationlewd actpeaceful contactSexual Assault
Previous : Boyfriend Set for Trial on 3 Felony Counts after Choking Girlfriend and Her Juvenile Son
Next : One Trial Avoided, Another Maybe Not in Two Misdemeanor Cases