Visalia, CA – It was another case where a family called the police after their loved one was having a psychiatric emergency and the police came and the situation progressed to the point where the man suffering from schizophrenia ended up bitten on the face by the K-9, the family says while restrained and rendered helpless by the police.

The family along with Civil Rights Attorney James DeSimone announced a civil rights lawsuit on Tuesday in Visalia.

The family alleges that the Visalia Police violated Jordan Gutierrez civil rights when the set a K-9 loose on him while his arms were being restrained behind his back already.  They further allege they delayed getting him medical care following the incident.

doctors who treated him when they finally brought him to a local hospital,” the suit alleges.  “They then threw him in jail where his condition worsened as they denied him necessary medication and treatment.”

The lawsuit alleges that Gutierrez was left for two days in just a hospital gown, underwear and shoes, as his mental health deteriorated.

“Jordan’s mother called 911 for help to have her son brought to a hospital.” said DeSimone, the Marina del Rey, Calif., civil rights attorney representing Jordan Gutierrez and his mother Yajaida Keys. “Instead of rendering aid, they had a K-9 do their dirty work, attacking the helpless Jordan Gutierrez as he was being held securely by two Visalia Police officers.” 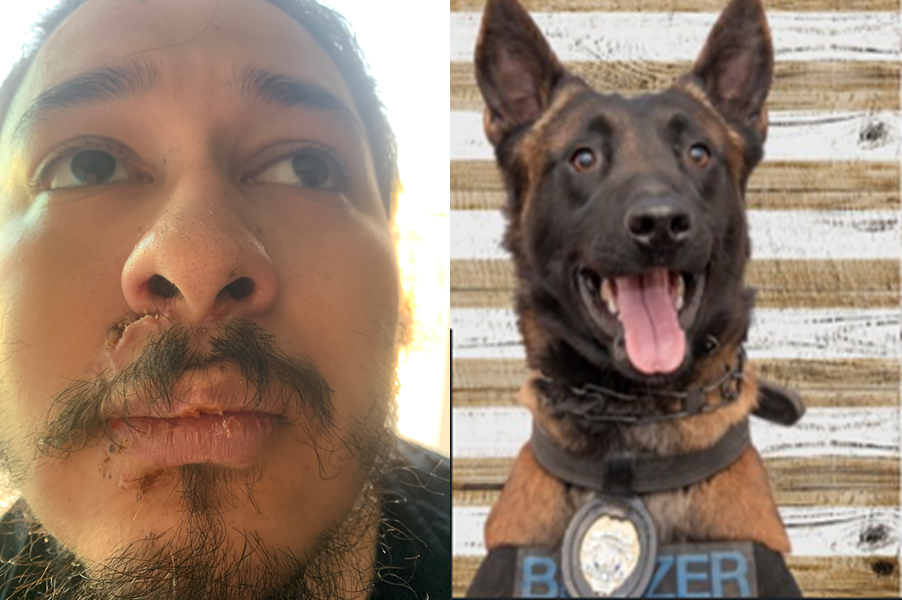 “Based on our investigation, we contend that the Visalia police department has a policy and practice of using its K-9s to torture mentally ill individuals who are perceived as vulnerable,” DeSimone added.

The incident happened just after 5 pm on Tuesday, October 20, 2020.  Police according to media accounts were called to the scene after Keys called and claimed that Gutierrez became violent.

According to Sgt. Celestina Sanchez in local media accounts, the Visalia police officers attempted communication with him but he took off allegedly throwing trash cans at a patrol car and kicked at one of them.

“Jordan was still not cooperating and still not complying. Jordan also had one of his hands in his pocket so the officers weren’t sure if he had a weapon on him,” Sanchez said.

At this point, they grabbed him arms and that’s when the dog attacked.

Sanchez acknowledged in the media account that it was unknown as to why the K-9 bit Gutierrez first on his hip and then his face.

A video was provided to the media – a cell phone video from some distance.  The video does not show the can incident.

While the police claim he threw the trash cans at him, Keys saw it differently.

“Jordan… took off running because he saw a police car with its lights on chasing him,” she said.  “My son ran and he lifted trash cans out of the way as he ran.”

The video picks up when they had him cornered with a taser pointing at him.  They moved him to the back of the police car which when the K-9 bit him in the face.

Gutierrez suffered serious bites to his face and hip.

DeSimone pointed out in an interview with the Vanguard that once the video comes on and Gutierrez stops running.  “He never moves from the spot that he’s initially cited at by those officers.”  He added, “He’s not in a threatening way.”

DeSimone alleges from the start that the first officer acts very aggressively.  He has a taser out, pointing it at Gutierrez and threatening to arrest the mother.

Keys said on the video that the police don’t need to taze him, he needs medical attention.  The officer responds that he needs this for his protection because he threw garbage cans at me.

“That’s the first lie,” DeSimone said.  “The sister saw this – he didn’t throw any garbage cans at these officers.  They were knocked over when they (the police) were still in the car.”

The first encounter with the officer he says, “Get back or I’m going to arrest you.”

DeSImone said, “From a perspective of how should police respond to mental health calls that a family member has called for assistance.  It made sense to speak with that family member and get information about what the situation is…  Instead he says get back or I’m going to arrest you.”

Is this just a matter of police not being properly trained to deal with a mental health crisis?

According to DeSimone when he communicated with the city of Visalia, they said that their officers have this type of training.

“That even makes it worse,” he said.  “If they’re trained on how to intervene and mental health situations, and this is what they bring, I mean, they basically, they basically came to be battle with a non-violent unarmed, mentally ill young man whose mom called for help. And he hadn’t done anything.”

He said, “I think it’s more of a policy within the city of Visalia that these officers have been allowed to get away with this with impunity. There’s no accountability for excessive force.”

For his part, since the incident, Gutierrez has both mental and physical scars.

“My son is definitely super traumatized,” Keys told the Vanguard.  “He sits in the dark, he doesn’t go anywhere. If he does come with me, he doesn’t get out of the car. I mean, he’s extremely traumatized. He sees police officers and he immediately like weeps.”

The city, police chief and three other officers are also named in the lawsuit, which was filed in U.S. District Court in Sacramento.

The federal civil rights lawsuit comes just months after the city was sued for the unlawful arrest and injuries inflicted on a mentally disabled man who was walking through a shopping center parking lot across the street from his home.